Praying in Advent with USPG
and Lichfield Cathedral
(1): 3 December 2017

Today is the First Sunday of Advent (3 December 2017). Later this morning, I am leading the services and preaching in Saint Mary’s Church, Askeaton, Co Limerick (the Parish Eucharist), and Saint Brendan’s Church, Kilnaughtin (Tarbert), Co Kerry (Morning Prayer). In the evening, I hope to take part in the Advent Carol service in Saint Mary’s Cathedral, Limerick.

Throughout the season of Advent this year, I plan to spend a short time of Prayer and reflection each morning, using the prayer diary of the Anglican mission agency, USPG (United Society Partners in the Gospel).

Theologically, practically and financially, USPG encourages and enables churches within the Anglican Communion to act as the hands and feet of Christ. Together, they are working to improve health, tackle poverty, put children in school, challenge discrimination, nurture leaders, give voice to women, and much more.

The diary publishes this story from the USPG-supported PMTCT (Prevention of Mother-to-Child Transmission) HIV programme run by the Church of Tanzania:

In 2000, Sophia left the village of Mzula and moved to the capital Dar es Salaam in search of a better life. She found work as a waitress, then met a young man with whom she started a family.

Sophia had two children, but illness claimed their lives while they were very young. Then Sophia became sick, developing partial paralysis, and the couple separated.

In 2015, Sophia met another partner. But when she became pregnant, he abandoned her. Unable to cope, Sophia returned to her mother in Mzula.

When a mobile clinic from Mvumi Hospital visited the village, Sophia was found to be HIV-positive. She started attending the hospital’s PMTCT services, which showed Sophia how to care for herself and her unborn baby.

In June 2016, Sophia have birth to a baby boy, Shedrack, who was free from HIV. Sophia was overjoyed! She reported: ‘Without the support of this project, I would never have been tested or received support. I have regained the happiness I lost.’

O God, whose promises to faithful Abraham and Sarai
were fulfilled in the birth of Isaac:
bless all expectant mothers in Tanzania,
and bring their children to fullness of life. 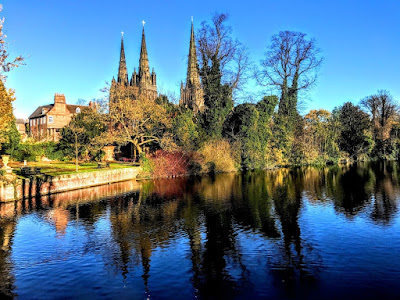 Lichfield Cathedral in winter sunshine at the end of November (Photograph: Patrick Comerford, 2017)

Lichfield Cathedral’s Advent Devotional Calendar for 2017 suggests you light your Advent candle each day as you read the Bible and pray. It suggests setting aside five to 15 minutes each day.

The reflection for today suggests going to Church and continues:

At the start of Advent, ask God for the gift of Spiritual sight. Pray for those deprived of physical sight. Ask for the gifts of attentiveness and perception.