Christmas: A message
of solidarity 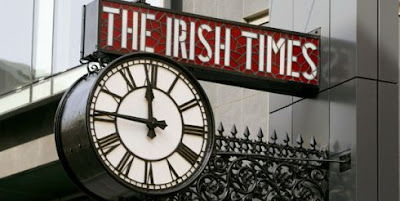 This full-length editorial is published in ‘The Irish Times’ today [23 December 2017], in the last edition before Christmas Day 2017:

The Festival of Nine Lessons and Carols is one of the comforting and stable traditions of Christmas throughout the English-speaking world. It has become so popular in Ireland that it is now a seasonal feature in many churches and cathedrals. Tickets for this year’s service in Dublin’s St Patrick’s Cathedral on Christmas Eve are so sought-after that they were all allocated many weeks ago.

Yet, like many Christmas traditions – from the Christmas tree to popular and well-loved carols – this service is a recent innovation, dating only from the later decades of the Victorian era.

When Edward White Benson became bishop of the newly-formed Diocese of Truro in 1877, he found an improvised wooden building was serving as his cathedral, and the choir spent the evening of Christmas Eve going from one chorister’s house to the next, singing a carol in each house, steadily drinking and gradually becoming more-and-more tipsy as they made their way through the Cornish town.

Benson set about making Christmas Eve more meaningful, integrating it into the Christmas celebrations. And so, the first Service of Nine Lessons and Carols was hosted in his temporary wooden cathedral on Christmas Eve 1880.

Benson went on to become Archbishop of Canterbury, and his new service is part of his legacy to the wider church. In its present format, it relies on an adaptation made by Eric Milner-White in the Chapel of King’s College, Cambridge, in the immediate aftermath of the first World War. The 100th service in King’s College Chapel takes place tomorrow.

No room in a teeming city

But it would be wrong to think either Benson in Cornwall or Milner-White in Cambridge wanted their lessons and carols to be comforting and soporific: Benson tried to bring the Christmas message into the dark, dismal corners of a town that no cathedral choristers wanted to trudge through in the bleak mid-winter. Milner-White, a decorated war chaplain, wanted to challenge post-war Britain with the dangers of descending into isolation, marginalising the foreigner and ignoring the suffering and violence that brought a divided and war-torn Europe close to self-destruction. It is a message that is equally relevant in a Brexit Britain today.

The traditional opening carol for this service, ‘Once in royal David’s city,’ by the Irish-born Cecil Frances Alexander, tells again the story of a homeless pregnant mother who can find no room in a teeming city. About 190,000 homes lie empty in Ireland this Christmas, more than enough to house people living in emergency accommodation. This young mother, who fails to find shelter, gives birth in a squalid stable not fit for human habitation; estimates this week say 3,194 children are being housed in unfit accommodation in Ireland this Christmas.

The ever-popular Victorian hymn by Christina Rossetti, ‘In the bleak mid-winter,’ is sung regularly at this service. She was part of a group of Anglo-Catholic socialists linked with the Pre-Raphaelite Movement, and her winter was made bleak not merely by the snow or the earth “hard as iron”, but more by the hardness of heart that made the poor lonely and isolated. Yet, for Rossetti, the greatest gift to offer is not dependent on wealth or spending power, but on simple human love.

After the Ninth Lesson, the service ends with two traditional hymns, ‘O come, all ye faithful’ and ‘Hark! the herald angels sing.’ The first of these paired hymns, translated by Frederick Oakeley, speaks of fear and poverty in ways that are more challenging than they are consoling. The second hymn, by Charles Wesley, is imbued with promises of peace on earth and joy for all nations, in contrast with forces of fear, isolation and death.

The fear of terror in Britain this year after the attacks at the Manchester Arena and London Bridge means King’s College Chapel has abolished the early morning Christmas Eve queue that has been part of the seasonal tradition, and entry tomorrow is on a ticket-only basis. But concentrating on changes such as this detracts from the main message of the carols being sung and the lessons being read.

The Christmas message is plain and simple. It has nothing to do with the judgmental, harsh and deceptive lying of those who supported Judge Roy Moore and continue to back Donald Trump while calling themselves “conservative Evangelical Christians”. They wish to conserve neither the values of Christianity nor the good news of the Gospel. If people wish to “put Christ back into Christmas”, they can put into practice the message of love heard in the Nine Carols and Lessons this season: feed the hungry, clothe the naked, house the homeless, welcome the despised and the marginalised, care for the sick and the lonely, love our enemies, and love others as we love ourselves.

It is a simple message, preached in the Sermon on the Mount and given flesh on the first Christmas night.