The Hares of Listowel:
a family that witnessed
major political changes 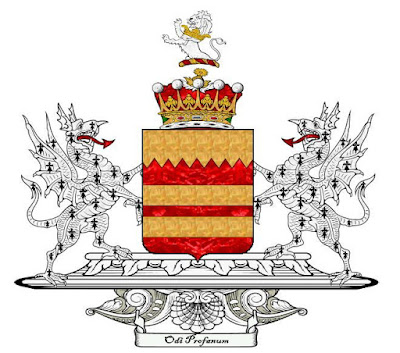 I was discussing the Listowel Arms Hotel earlier today, and the place of this boutique style hotel in the social and political history of Listowel. The hotel, which I visited earlier this week, has played host to literary figures such as the Victorian writer William Makepeace Thackeray, who recommended the hotel in 1843 in his Irish Sketchbook, and political guests in the 19th century included Daniel O’Connell and Charles Stewart Parnell, who spoke from first floor windows to large crowds gathered below in the Square.

The name of the hotel recalls the Hare family, who have held the title of Earl of Listowel for almost 200 years since 1822, and who were the proprietors of Listowel Castle after they bought the Listowel Estate from the FitzMaurices of Kerry at the end of the 18th century.

Although the actual coat-of-arms of the Earls of Listowel is not displayed at the Listowel Arms Hotel, the story of this family is an interesting one, that moves from opportunism at passage of the Act of Union to socialism and the end of colonialism in the 20th century.

The title of Earl of Listowel in the Irish peerage was given in 1822 to William Hare (1751-1837), 1st Viscount Ennismore and Listowel, who had been an MP in the Irish House of Commons for Cork City and Athy before the Act of Union.

He had already obtained for himself the hereditary titles of Baron Ennismore, of Ennismore in Co Kerry in 1800, and Viscount Ennismore and Listowel, in 1816, also in the Peerage of Ireland.

In 1825, the Limerick-based architect James Pain and his brother, George Richard Pain, designed Convamore Castle for Lord Listowel. The house was one of the first in Ireland to boast large plate glass windows. When Listowel died in 1837, he was buried in Westminster Abbey.

His eldest son and heir, Richard Lysaght Hare (1773-1827), known by the courtesy title of Lord Ennismore, had died in 1827. So, when the first earl died, he was succeeded by his grandson, William Hare (1801-1856), as the second earl. His Irish titles did not give him a seat in the House of Lords, and he sat in the Commons as MP for Kerry (1826-1830) and later for St Albans (1841-1846). He was outspoken in advocating Catholic Emancipation, and Queen Victoria was the godmother of his daughter, Lady Victoria Hare. 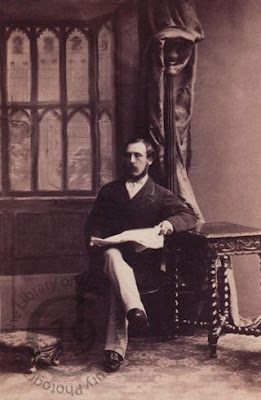 The Irish peerage titles passed to his eldest son, William Hare (1833-1924), as 3rd Earl of Listowel. He was an officer with the Scots Fusiliers Guards in the Crimean War (1854-1856). He was wounded at the Battle of Alma on 30 September 1854, and was invalided back to England by ship. In the 1855 general election, he stood for the Liberal party in Co Cork. He succeeded his father as 3rd Earl of Listowel a year later, but his Irish peerage still did not give him a seat in the House of Lords.

Although the family owned over 20,000 acres in the Listowel area, the Hares never lived at Listowel Castle, close to the Listowel Arms Hotel. The castle had fallen into ruins at the end of the 17th century, and instead the family lived at Convamore Castle, near Ballyhooly, Co Cork.

When it came to giving Lord Listowel a British peerage that gave him a seat in the House of Lords in 1869, he chose the title of Baron Hare of Convamore, Co Cork. He commissioned the new Church of Ireland parish church in Ballyhooly, designed by George Coppinger Ashlin, a pupil of Pugin, and opened in 1870. He was briefly a government whip in the House of Lords (Lord-in-Waiting) in 1880 at the beginning of Gladstone’s second Liberal administration, and also held the largely ceremonial post of Vice-Admiral of Munster.

The Prince of Wales, later King Edward VII, visited Convamore in 1885 as a guest of the family, and planted a magnificent blue cedar that still stands at Convamore.

During the Irish War of Independence, the IRA burned down Convamore in March 1921, claiming Lord Listowel was ‘an aggressively anti-Irish person,’ despite his lifelong Liberal politics and his popularity in Ballyhooly, where he had lived for 60 years. In retaliation, soldiers blew up the Castle Tavern at the crossroads. Convamore was never rebuilt, and its ruins are derelict and abandoned. 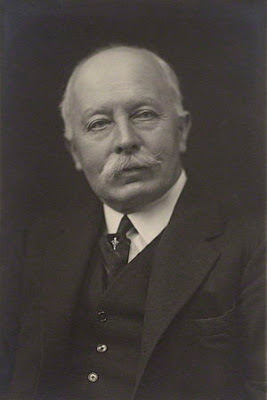 William Francis Hare (1906-1997), 5th Earl of Listowel, better known as Billy Listowel, was a Labour politician who played a key role in Indian and Burmese independence

Perhaps the most colourful Earl of Listowel was his son, William Francis Hare (1906-1997), 5th Earl of Listowel, better known as Billy Listowel. This colourful peer became a socialist when he experienced profound shock on discovering how poor children lived in a slum near his parents’ home in London. He was the last British Secretary of State for India and Burma, and the last Governor-General of Ghana, the last surviving Labour member of Churchill’s war-time coalition government, and the longest-serving member of the House of Lords. He was also the first and only Labour peer to have been the Lord Chairman of Committees.

William Francis Hare born on 28 September 1906, and after his father succeeded as the 4th Earl of Listowel in 1924, he held the courtesy title of Viscount Ennismore.

At Eton, where he was the only known socialist – apart from Hester Alington, wife of the headmaster, the Revd Cyril Alington. He debated with Quintin Hogg, later Lord Hailsham, opposing both the House of Lords and the hereditary principle. Although he held the courtesy title of Viscount Ennismore at the time, he preferred to be known at school as Mr Hare.

From Eton he went up to Balliol College, Oxford, to read Modern Greats. He found a platform at the Oxford Union to express of his political views, and as the socialist heir to an earl he quickly attracted press attention. His father removed him after only a year and asked the Marquess of Willingdon, then Governor-General of Canada, to accept his son as an aide-de-camp.

Eventually, he continued his university education at Magdalene College, Cambridge, where he read English. He went to study at the Sorbonne, and at London University he wrote a doctoral thesis later published as A Critical History of Modern Aesthetics (1933).

Meanwhile, shortly after his father’s death in 1932, Listowel took his seat in the House of Lords, not as Earl of Listowel, which remained an Irish peerage, but as Lord Hare of Convamore. At the time, the small number of Labour peers, led by Lord Ponsonby of Shulbrede, could be accommodated comfortably on two benches. He was also a Labour member of London County Council for East Lewisham from 1937 to 1946.

When World War II broke out in 1939, Billy Listowel volunteered to join the ranks. Because of his poor eyesight, he joined the RAMC, but was selected for Intelligence Corps training. One of his fellow second lieutenants was the philosopher AJ Ayer.

When he was appointed Opposition Chief Whip in 1941, he was released from the forces. Three years later, he became Deputy Leader in the Lords, and Parliamentary Under-Secretary of State at the India Office.

When Labour came to office in 1945 with Clement Attlee’s post-war election victory, Listowel was appointed Postmaster-General, a post he held until April 1947, and was briefly Minister of Information from February to March 1946, when the office was abolished.

Lord Mountbatten was appointed Viceroy of India in 1947, and at his request Listowel became Secretary of State for India. When the India Independence Bill was introduced, Listowel steered it through the House of Lords without amendment. Although he was invited to Balmoral to receive King George VI’s personal thanks for presiding over India’s transition to independence, he received no other honour.

His next appointment was as Minister of State for the Colonies, visiting Malaya, Barbados, Jamaica, Trinidad and Tobago, British Guiana, British Honduras, and the Windward and Leeward Islands.

He returned to London County Council as a Labour member for Battersea North from 1952 until 1957, when he was invited by Kwame Nkrumah, the socialist Prime Minister of Ghana, to become Ghana’s Governor-General.

His three years in Ghana were especially happy, and Ghana became an independent republic in the Commonwealth in 1960. Because of a mechanical fault, Listowel’s plane, which was scheduled to leave Ghana two hours before the country became a republic, took off only minutes before the deadline expired, narrowly avoiding a constitutional crisis.

He was Chairman of Committees in the House of Lords from 1965 to 1976, and for many years after he continued to sit on the Woolsack as one of the Lord Chancellor’s Deputy Speakers. He maintained a keen interest in foreign and Commonwealth affairs, human rights and Third World aid. He died in London on 12 March 1997.

The titles are held by his eldest son, the sixth Earl. Lord Listowel is one of the 90 elected hereditary peers who remain in the House of Lords since the House of Lords Act 1999 was passed. He sits as a cross-bencher and is known as an advocate of children’s rights. 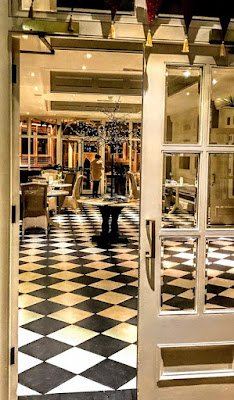 Thanks for this Patrick. I came across this when researching my Wrixon ancestors from North Cork. Mary Wrixon married the 1st Earl of Listowel. Nice to see what became of her descendants. Eunice Jeffers, Dunmanway

Interesting.
A record of a fund for the relief of Ballyhooly during the great Famine in 1847 is now available online at www.ancestry.co.uk.
It shows that it was launched with a donation from the (2nd) Earl of Listowel, for 25 shillings.
https://www.ancestry.co.uk/imageviewer/collections/1772/images/39_0096_0100_Cork-00108?pId=38784

(From the Famine Relief Commission Papers)

Thank you for this extensive article.
My great-great-grand-father, Henry Stevenson, was the butler to the 3rd Earl of Listowel.
In april 1871, when the census took place, the family and their servants were in Harleston, Northamptonshire which is not mentioned in your article :

Maybe their English residence when the 3rd Earl was active at the parliament ?