Following the Stations
of the Cross in Lent 2018:
1, Introduction

The Stations of the Cross in the Franciscan graveyard at Gormanston College, Co Meath (Photograph: Patrick Comerford; click on images for full-screen view)

The idea for this series of morning Lenten meditations came from reading about Peter Walker’s new exhibition, ‘Imagining the Crucifixion,’ inspired by the Stations of the Cross, which opens in Lichfield Cathedral today, Ash Wednesday, and continues throughout Lent.

I first became aware of the Stations of the Cross as an expression of Franciscan spirituality while I was at school in Gormanston, Co Meath, in the 1960s. The Stations of the Cross grew out of imitations of Via Dolorosa in Jerusalem, believed to be the actual path Christ walked on his way to Calvary. The stations offer a spiritual pilgrimage through contemplating the Passion of Christ.

Normally, a series of 14 images are arranged in numbered order along a path and we are invited to move from image to image, in sequence, stopping at each station to say selected prayers and reflections.

The style, form, and ordering of the stations varies widely. The typical stations are small plaques with reliefs or paintings placed around a church nave. Modern minimalist stations can be simple crosses with nothing more than a numeral.

The Stations of the Cross originated in pilgrimages to Jerusalem and a desire by pilgrims to follow Via Dolorosa.

After the Franciscans were allowed back into Jerusalem by the Muslims, Saint Francis of Assisi staged a re-enactment of the Passion of Christ. In 1217, he also founded the Custody of the Holy Land to guard and promote the devotion to holy places. Eventually, the Franciscans were recognised as the Custodians of Holy Places by Pope Clement VI in 1342.

The earliest use of the word stations to describe the customary stopping places along the Via Sacra at Jerusalem is found in an account by William Wey, an English pilgrim who visited the Holy Land in the mid-15th century. He describes pilgrims following the footsteps of Christ to the cross.

In the 15th and 16th centuries the Franciscans began to build a series of outdoor shrines in Europe to duplicate their counterparts in the Holy Land. The number of stations was often just seven but they could vary between seven and 30. They were often placed in small buildings along the approach to a church.

In 1686, Pope Innocent XI gave the Franciscans the right to erect stations within their churches. In 1731, Pope Clement XII extended to all churches the right to have the stations, provided a Franciscan priest erected them with the consent of the local bishop. At the same time, the number of stations was fixed at 14.

In 1857, the Roman Catholic bishops of England were allowed to erect the stations by themselves, without the intervention of a Franciscan priest, and in 1862 this right was extended to bishops throughout the church.

The standard set of 14 Stations from the 17th to 20th centuries has depicted these scenes:

1, Jesus is condemned to death

Although not traditionally part of the Stations, the Resurrection is sometimes included as a Station 15.

Only eight of the 14 traditional Stations of the Cross have scriptural foundations. Stations 3, 4, 6, 7, and 9 are not recorded in the Gospels, and the story of Veronica wiping the face Christ is not known before mediaeval times. 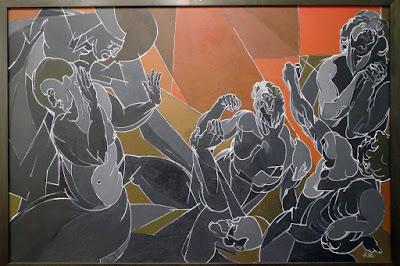 ‘Imagining the Crucifixion,’ Peter Walker’s exhibition inspired by the Stations of the Cross, opens in Lichfield Cathedral today and continues throughout Lent

Meanwhile, throughout Lent, Lichfield Cathedral is hosting an exhibition, ‘Imagining the Crucifixion,’ which is the first part of a two-year creative journey that explores a contemporary interpretation of Christ’s journey to the Cross.

Through a series of diverse approaches, the exhibition gives a new insight into the artist’s creative process, leading the viewer through the Stations of the Cross, and the artistic journey of re-imagining these moments in contemporary art.

In working closely with the Dean of Lichfield, the Cathedral’s Artist-in-Residence Peter Walker offers a rare opportunity to see behind the artist’s studio wall. The exhibition is inspired by paintings and sculpture of the Renaissance, and explores how the way we consume and experience art has changed and developed significantly since the 15th and 16th centuries.

This collection of sketches, studies and experimental adoptions, original painting, sculpture and digital artwork, offers the opportunity to experience and explore profound human moments shoulder to shoulder with the artist.

‘This exposition of the Stations of the Cross presents an opportunity for all of us to bring the most difficult human experiences into dialogue with the suffering and death of Jesus Christ. The Stations help us see the depths of God’s love for the world: how Christ absorbs human hatred and evil, bearing its colossal weight, to give us a new birth in his peace and love,’ says the Dean of Lichfield, the Very Revd Adrian Dorber.

‘Imagining the Crucifixion,’ a contemporary interpretation of the Stations of the Cross involving sculpture, painting and drawing, is at Lichfield Cathedral from today [14 February 2018] until Easter Monday [2 April 2018]. Entry is free.

Tomorrow: 2, Introducing the Stations of the Cross in Saint Mel’s Cathedral, Longford