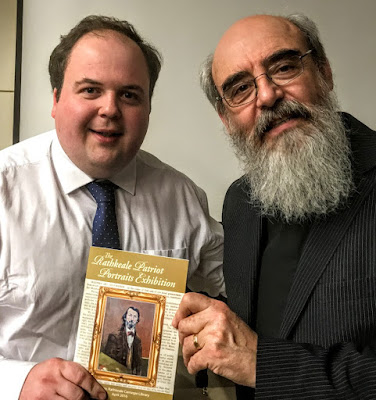 With Councillor Adam Teskey, chair of Rathkeale and District Historical Society, at last night’s lecture in the Arts Centre, Rathkeale

During last night’s lecture in Rathkeale on the members of Southwell family and their legacy in the stained glass windows in Saint Mary’s Church, I referred to the Victorian novelist Anna Caroline Steele (1841-1920), who was the daughter of the Revd Sir John Page Wood and the novelist Lady Emma Wood (1802-1879).

Anna was an important figure in this story: she was a sister of Field Marshal Sir Evelyn Wood, who married the Hon Mary Paulina Anne Southwell, a sister of Thomas Southwell, 4th Viscount Southwell, who was the central figure in last night’s lecture, and of Kitty O’Shea, the lover of Charles Stewart Parnell.

But there was little time last night to look at Anna’s place in literary life as a Victorian writer and novelist.

Anna was born at Rivenhall Place in Braintree, Essex, where her father was the Vicar of Cressing. She grew up in the Essex countryside surrounded by a cultured family. Her mother was a poet and novelist, who also wrote under her maiden name Emma Mitchell and the pen name of C Sylvester. Her elder sister Emma was a composer and novelist, and the family staged elaborate amateur stage plays, for which Anna wrote the play Under False Colours.

Anna was not yet 18 when, on 28 May 1858, she married Captain Charles Steel, later Lieutenant-Colonel Charles Steel, in Saint Martin in the Fields, London.

Charles Steel had been an officer in the 17th Lancers with Anna’s brother Evelyn. Steel was the son of Lieutenant-General Sir Scudamore Winde Steel, KCB (1789-1865), who commanded the Madras army during the Second Anglo-Burmese War (1852-1853).

Anna seems to have changed the spelling of her married surname, adding the extra ‘e’ at the end of the name.

The marriage was short lived: family lore holds she was horrified by the wedding and left the bedroom at the sight of her naked husband; Anna returned home after a week, never lived with her husband, never divorced, and died a virgin.

Anna published her first novel, Gardenhurst, in 1867. The novel, dedicated to her sister Katie, better known as Kitty O’Shea, follows the trials of a large upper middle-class family.

Anna followed this novel with half-a-dozen more, including So Runs the World Away (1869), Broken Toys (1872), and Condoned 1877. One of her novels featured a henpecked VC, a character probably based on her brother, Field Marshal Sir Evelyn Wood, who married the Hon Mary Paulina Anne Southwell, a sister of Thomas Southwell, 4th Viscount Southwell, the subject of last night’s lecture. Anna Steele was very close to her brother and it is said she helped to write his speeches.

Given the rumours that surrounded her marriage, it is interesting that one of her later novels was published as Lesbia: A Study in One Volume (1896).

She also translated Victor Hugo’s novel By Order of the King (1870). A condensed version of her translation had been serialised in the Gentleman’s Magazine When the book was published, she remained anonymous at first, although she was later identified as Mrs AC Steele.

The illustrator, Luke Fildes, rose to prominence in 1870 with his illustrations for Charles Dickens’s unfinished novel, The Mystery of Edwin Drood, and for his moving drawing of Dickens’s study after his death, entitled ‘The Empty Chair’.

A review of her translation in the Spectator on 5 November 1870 declared: ‘It is indecent beyond anything that we have ever read out of classical literature. We say indecent, not immoral.’

The reviewer referred to ‘the nude picture of the Duchess in her chamber’ and said ‘these things are grossly indecent; that they ought never to have been written; that their presence in a magazine which probably lies on ordinary drawing room tables, and in volumes which bear on their title-page the name of a respectable firm, is a disgrace to everyone concerned in publishing them, we do not hesitate to affirm.’

The reviewer continued: ‘We say “a disgrace,” because there are errors of judgment which are so inexcusable and so injurious in their effect that they merit no less emphatic a condemnation. Anyone with a grain of sense must know that the indecent is often just as noxious as the immoral. A scientific book, for instance, which will be simply instructive to the readers for whom it is intended, may be harmful in the last degree to those who find in it what it is not their business to learn.’

The writer concluded that her translation ‘is in the highest degree mischievous and absurd, and unfit for the reading of decent and sensible people.’

Anna’s sister, Kitty O’Shea, had separated from William O’Shea in 1875 and had been the lover of Charles Stewart Parnell since 1880. It has been suggested by some writers that Anna Steele herself was a former lover of William O’Shea.

She enjoyed a wide circle of literary friends, including George Meredith and Anthony Trollope. Eventually, when her aunt’s will was overturned, Anna Steele moved out of Rivenhall Place about 1895, and the family home was left in a sad and ruinous state. She used her share to live as a recluse, keeping a pet monkey to which she fed anchovy sandwiches.

Anna Steele died in 1920 at her home in Brighton.

Given the family lore that surrounds the stories of her wedding night, and the sensation caused by her translation of Victor Hugo, I wondered last night whether it was coincidental that Ana Steele is the name of the female protagonist of the Fifty Shades of Grey trilogy by EL James, and played by Dakota Johnson in the film versions.

The Essex countryside in which Anna Caroline Steele spent much of her life (Photograph: Patrick Comerford)

A full and rewarding read. History is at its most important when it's properly ''people'' --those things that comprise the human element. On anchovy sandwiches and the monkey, I think I saw the headline about that on a different post earlier. Shome mistake, Pat?