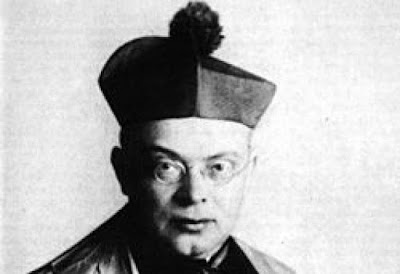 When I was looking at Irish connections with Poland in anticipation of my visit to Warsaw this week that has been cancelled, I also came across the story of Edward O’Rourke (1876-1943), who was the first Bishop of the Free City of Danzig, present-day Gdańsk in Poland, and an outspoken opponent of Nazi and policies in intervention in Danzig.

O’Rourke’s short-lived church career in Danzig coincided with the time the Irish diplomat Sean Lester spent in the city as the League of Nations High Commissioner.

Edward O’Rourke, who was known in Polish as Edward Aleksander Władysław O’Rourke, was born Eduard Alexander Ladislaus Graf (Count) O’Rourke in Basin, Minsk, in present-day Belarus, on 26 October 1876. He was a member an aristocratic family of Irish ancestry, many of them high officers in the Russian military. The most prominent was Joseph Cornelius O’Rourke. They held imperial titles of the Russian Empire and of the German Holy Roman Empire, but also held the title of Irish counts, which was granted by the Tsar in 1848. But there are no Irish counts as such, and many genealogists question the origins and the original legitimacy of this title.

He was ordained priest in Wilno, now Vilnius in Lithuania, in 1908, and was appointed Professor of Church History, German and French at the Roman Catholic seminary of the Archdiocese of Minsk-Mohilev in Saint Petersburg. From 1912 to 1915, he was parish priest of the multilingual congregation of Saint Stanislaus in Saint Petersburg.

After the February Revolution in Russia, O’Rourke was appointed administrator of the Diocese of Minsk and interim head of the Roman Catholic Church in Russia. With the proposed independence of Latvia, the Diocese of Riga was formed in 1918, and O'Rourke became Bishop of Riga.

But when German forces occupied Riga in 1919, O’Rourke faced new problems. He resigned in the face of calls for an ethnic Latvian bishop after a new government took office in Latvia.

O’Rourke was then appointed titular Bishop of Canea and Apostolic Delegate for the Baltic States in 1920. Canea was a titular Latin see, named after Chania in Crete. It had long been a Venetian diocese, and was not suppressed by the Vatican until 1700, long after Venetian Crete had fallen to the Ottoman Turks. O’Rourke’s immediate predecessor in this title was the church historian Nicholas Donnelly (1837-1920), while he was an Auxiliary Bishop in Dublin (1883-1920).

Meanwhile, the Free City of Danzig (Gdańsk) was separated from Germany under the Treaty of Versailles, and its autonomy from Germany and the new Polish Republic was recognised in 1920 and guaranteed in International Law by the League of Nations.

O’Rourke became the Pontifical Delegate for Russian refugees in Danzig and East Prussia in 1921, and at the end of 1922 he became the Apostolic Administrator of Danzig, with the titular title of Bishop of Pergamon, once a Greek diocese in Asia Minor.

In the 1920s, he visited Co Leitrim, and his research on his Irish ancestry led to him compiling Documents and Materials for the History of the O’Rourke Family, published in Danzig in 1925.

When the Diocese of Danzig was formed that year, outside the hierarchies of both Poland and Germany, O’Rourke became the first Bishop of Danzig. Initially he had good relations with the authorities in Danzig, who made him a citizen of the free city in 1926, and with the majority German-speaking Lutheran population.

The Irish diplomat Sean Lester (1888-1959) became the League of Nations High Commissioner in Danzig in 1933. But the city was fast becoming the centre of an international crisis as the Nazis took over and tried to absorb Danzig into Nazi Germany. Lester repeatedly protested to the German government against the persecution and discrimination of the Jews, and he became increasingly isolated in Danzig.

Both O’Rourke and Lester were considered personae non grata by the Danzig Nazis. The two men found a common affinity in their respect for human rights, their opposition to Nazism and their Irishness. O’Rourke was intensely proud of his Irish ancestry, and Lester recalls in his diary how on their first meeting in 1934 the bishop came into the room ostentatiously carrying an Irish magazine and patriotically forcing himself to smoke ‘Irish’ cigarettes over his preferred Russian brand.

O’Rourke too had come into conflict with the Nazis in Danzig. He called a synod from 10 to 12 December 1935 in the face of opposition from the Nazis, who wanted to incorporate his diocese into German church structures.

When Lester had been forced from his post in 1937, O’Rourke became the last independent voice in the so-called ‘Free’ City. The German-speaking Catholic clergy, along with the Nazis, openly opposing his support for the foundation of a Polish parish and the appointment of four additional Polish parish priests.

The Nazi-controlled senate forced O’Rourke to resign as Bishop of Danzig in October 1937, and moved to the Polish city of Poznan.

In Poland, O’Rourke retained his episcopal status with his appointment as Titular Bishop of Sophene, a former diocese in Mesopotamia in 1938. Later that year, he was given Polish citizenship in and was made a canon of the cathedral in Gniezno and Poznań in western Poland.

When Nazi Germany invaded Poland in September 1939, O’Rourke was on his way to Estonia. He travelled through Warsaw and Königsberg (present-day Kaliningrad) to Berlin, where he applied for a visa to Italy.

When he arrived in Rome, O’Rourke tried to return to his Diocese in Poznań. But the Nazis rejected his application for a visa. Edward O’Rourke died in Rome on 27 June 1943. He was reburied in Oliwa Cathedral in Gdansk in 1972.

Today, Bishop Edward O’Rourke is regarded as one of the heroes of Polish resistance to the Nazis, and in Poland his Irish family roots are not forgotten.

The old harbour of Chania ... Edward O’Rourke was the titular Bishop of Canea from 1920 to 1922 (Photograph: Patrick Comerford)