Bringing back rich pickings from
the bookshops in Lichfield 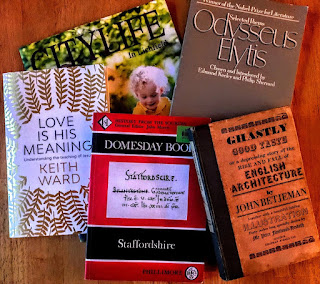 The fruits of browsing in the bookshops of Lichfield this week (Photograph: Patrick Comerford, 2018)

When I was speaking at Lichfield Civic Society on Tuesday evening, I mentioned in an aside how missed the former Staffs Bookshop, which was my favourite second-hand bookshop in Lichfield until its demise a few years ago.

If there is a downside to travelling on Ryanair between Birmingham and Dublin, it is not being able to bring back as many books as my eyes covet in my cabin baggage. But some of the books I brought back this week include the Staffordshire volume of the Domesday Book series published by Phillimore in the 1970s, an eccentric but delectable book on architecture by John Betjeman, a collection of poems by Odysseus Elytis, and a new book by Keith Ward challenging fundamentalist readings of the Gospels.

In the 1970s, Phillimore of Chichester published a series of books on the Domesday Book arranged by the ancient counties or shires, which had changed little until 1974. The series, edited by John Morris, aimed to make these fundamental sources for local history more widely available, giving the original text and a new translation.

The Domesday Book was a statistical survey of England in 1086, including a census of the population and productive resources, their value and who held them. It was unmatched in Europe for centuries. The Staffordshire volume, published in 1976, was edited from a draft translation prepared by Alison Hawkins and Alex Rumble.

Although Comberford is not recorded in the Domesday Book, there are interesting entries for Wigginton, the manor that then included Comberford, and, of course for Lichfield and Tamworth, as well as other places I have written about in recent years or that are linked to the Comberford family, including Wolseley, Weeford, Rugeley, Penkridge and Wednesbury.

Centuries later, the Comberford family would claim the lordship of the Staffordshire half of Tamworth, and I see that at the time of the Domesday Book the Manor of Wigetone or Wigginton included two hides, land for six ploughs, eight villagers, one slave, one smallholder and ‘4 burgesses in Tamworth.’ They had six ploughs between them, and a meadow six furlongs in length and two furlongs long.

The value of Wigginton before 1066 was 30 shillings, but at time of the Domesday Book it had risen to £4.

As I referred on Tuesday evening to John Betjeman’s assessment of the Wyatts of Weeford, it was interesting to pick up a a rare copy of his exotically titled Ghastly Good Taste, or, a depressing story of the Rise and Fall of English Architecture (London: Chapman and Hall, 1933).

Betjeman was passionate about architecture, ‘preferring all centuries to my own.’ This was his first prose work, and in it he vigorously defends his love of Victorian and Edwardian architecture, considered deeply unfashionable at the time. With savage humour, he attacks both notions of Modernism and unthinking antiquarianism.

A type of family tree of architecture drafted by Betjeman presents his chart of the growth of ‘Good Taste’, descending from Victorian Architecture through the ‘Mainly Domestic’ and the ‘Mainly Public’ to ‘the Deep Pit of Speculative Building.’ A quick glance gives an immediate impression of Betjeman’s contempt of ‘Sham Tudor Revival,’ Maida Vale, Garden Cities such as Bournville, Welwyn and Port Sunlight, Baptist churches and ‘large pseudo-classical offices’ and ‘pseudo-modern factories with Egyptian motives.’

Still in place at the back of the copy I bought is its one illustration, a 40-inch long drawing by Peter Fleetwood-Hesketh, an exquisite work of draughtsmanship depicting ‘The Street of Taste or the March of English art down the ages.’ A note adds with almost schoolboy-humour: ‘A close and comparative study of lamp posts, traffic and advertisements in this chart will enlighten the reader still further.’

I should not have been surprised in Lichfield to come across Odysseus Elytis, Selected Poems, chosen and introduced by Edmund Keeley and Philip Sherrard (Penguin 1981).

Two years before this edition was published, Odysseus Elytis (1911-1996) received the Nobel Prize for Literature in 1979, and this collection is drawn from all periods of his long and distinguished career, marked by his concerns for freedom and creativeness.

Odysseus Elytis was born in Iraklion in Crete and lived in exile in Paris during the colonels’ regime in Greece. His landmark work, Axion Esti (Το Άξιον Εστί, 1959), inspired by the Greek Orthodox liturgy, was set to music by Mikis Theodorakis as an oratorio, and became an anthem against injustice and for resistance sung by all Greeks. He died in Athens in 1996.

The Revd Keith Ward is an Anglican priest, a former Dean of Trinity Hall, Cambridge (1975-1983), a former Regius Professor of Divinity at Oxford (1991-2004) and now a Professorial Research Fellow at Heythrop College, London. He has 40 or more books to his name, and Love is His Meaning: understanding the teaching of Jesus (London: SPCK) was published last year (2017).

In this book, he explores the different figures of speech and images used by Jesus and finds they are all ways of expressing and evoking the self-giving love of God, manifested supremely in the life of Christ.

Putting aside what he regards as literalist, authoritarian, legalistic, judgmental and divisive presentations of Jesus’ teaching, Keith Ward argues that what remains is the Gospel of a divine love – a love stronger than death and the only power he believes can and will redeem our disordered world.

And of course, in the bookshops in Lichfield, I also picked up the current edition of the colourful monthly magazine CityLife In Lichfield, edited by Joss Musgrove Knibb.

The latest edition includes reports on ‘Consequence of War,’ the current exhibition in Lichfield Cathedral, a glimpse inside the ‘hidden spaces’ of the Tudor of Lichfield, and a photo-feature on ‘A Window on the Past’ and the local history and Facebook group, ‘You’re probably from Lichfield, Staffs if …’ – as well as mentioning my lecture last Tuesday on the Wyatts of Weeford.