Getting beyond the plaster-cast
statues of a demure Virgin Mary 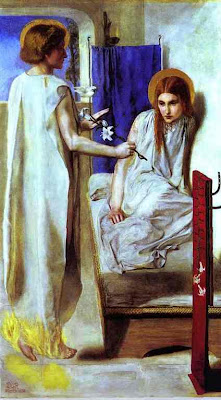 I have had an interesting Easter … well, in fact, two Easters. Because I just arrived back in Askeaton late yesterday, having celebrated Good Friday and Easter in Thessaloniki, the northern Greek capital.

What a privilege to be able to celebrate Easter here, and then a week later, because of the differences in the Western Calendar and the Orthodox, to be able to take part in Holy Week and Easter once again.

As I looked at a fresco of the Annunciation in one church on Good Friday, I realised how important the Feast of the Annunciation is in the Greek Church, where it is one of the twelve Great Feasts of the Church. It is so important in Orthodox theology that the only time the Divine Liturgy may be celebrated on Good Friday, or ‘Great and Holy Friday,’ is if it falls on 25 March.

This fresco of the Annunciation in that church was also in sharp contrast to the plaster-cast statue images of the Virgin Mary we often see in churches in Ireland: her demure robes of white and blue are hardly portray those of the strong Mary in the canticle Magnificat, the strong Mary who stands by the Cross when most of the disciples have run away, the strong Mary of the Pieta.

We are all used to these images of Mary that lack challenge and message, images that have been inherited through Mediaeval and Renaissance art. But perhaps one of the most challenging presentations in art of the Annunciation that I know is Dante Gabriel Rossetti’s painting, Ecce Ancilla Domini! (1850), now in the Tate Gallery in London.

The poet, painter, and designer Dante Gabriel Rossetti (1828-1882) was a co-founder of the Pre-Raphaelites, a group of Victorian artists who wanted to emulate the richness and purity of the mediaeval period. The son of an exiled Italian patriot and scholar, he was a brother of the poet Christina Rossetti (1830-1893), author of one of the greatest Christmas carols, In the bleak mid-winter.

His painting is one of the earliest Pre-Raphaelite paintings, and when it was first exhibited in 1850 it shocked and stirred controversy. In his painting, Rossetti offers a radical reinterpretation of the Annunciation, rejecting the traditional representation of the Virgin Mary passively receiving the news. Instead, he seeks to give the picture a supernatural realism.

While the angel is announcing to the Virgin Mary that she is to give birth to the Christ Child, she appears to be recoiling, as if disturbed from sleep.

This painting is unusual in that the artist shows Mary in a state of fear –she cowers against the wall and casts her eyes down. This is a far cry from many depictions of the Annunciation where Mary is shown in a state of humble acceptance.

White is the dominant colour in the painting, relieved only by small areas of blue, red and yellow. This emphasises the quality of the Virgin Mary’s purity, and is reinforced by the lily embroidery – the same one the Virgin Mary is shown making in Rossetti’s painting of The Girlhood of Mary Virgin, also in the Tate.

Early great paintings of this scene usually depict lilies, the symbol of the Mary’s purity, in a vase nearby the scene as the angel addresses the Virgin. Although Rossetti also uses lilies, he integrates them into both the action and the environment of the scene.

In Rossetti’s painting, Gabriel holds out a stem with lilies, offering them to Mary and seemingly presenting her with an embodiment of the chastity and purity she is fated to continue throughout her life. An embroidery hangs at the end of the bed, which Mary is also working on in The Girlhood of Mary Virgin. This tells us that this is a young girl’s bedroom, so we might expect to find her needlework in this space – as well as perhaps representing her active choice to live purely since she has chosen to embroider a lily.

Mary is not dressed in her traditional blue; instead she wears a simple white dress. Yet, Rossetti does not ignore the importance of blue as the colour associated with the Virgin Mary and heaven: he places a blue screen directly behind her, and looking through the window, the sky is a similar shade of blue, alluding to heaven.

Most Annunciation scenes have candles that have just blown out as a result of the entrance of the Holy Spirit. Instead, Rossetti paints a wall sconce with a hint of a flame – a different presentation of a usual symbol. He includes a dove, embodying the Holy Spirit, although in this case he has not drastically transformed a traditional symbol.

Rossetti’s imagined space shows great innovation. Compared to the traditional interiors, rich with elaborate floor tiles, stained glass, wooden furniture, rugs, pillows, and similar details, the Virgin’s bedroom in Rossetti’s painting is shockingly simple. White stone tiles cover the floor; the walls have white paint; the window has no panes; and the only object in the room that I have not mentioned already is a simple, low wooden bed with a white mat and pillow.

In traditional paintings, the room draws the viewer in and the eye is allowed to move through the scene to the back wall of the bedroom. But Rossetti places Mary in a room that is almost claustrophobically small. The use of perspective is unconvincing: Mary’s bed appears about to slide out of the painting and the floor on the left of the painting blends into the wall, furthering the effect of a steep plane.

For the view out the window at the back, Rossetti might have given the scene depth by showing the countryside in the distance. Instead, he shows only blue sky and part of a tree.

Rather than a winged, long-haired boyish angel, Rossetti paints an androgynous Gabriel, without wings, his face only visible in highly shadowed profile, with the hints of yellow flames around his feet.

Mary sits on her bed and slouches against the wall. She is markedly adolescent with her beautiful young features, unbrushed straight hair, childishly skinny body, and the hesitance, fear and melancholy with which she responds to the Angel Gabriel’s news. Wisps of her messy, auburn hair spread around her neck, silhouetted against her white dress, reminiscent of a bloodshot eye or perhaps intentionally of Christ’s crown of thorns.

Rossetti has no use for the stiff, exaggerated poses of primitive Virgins. He seems most concerned with the sincere response of a young girl who has been given a burden that is both wonderful and laden with responsibility. And in this task, Rossetti thoroughly succeeds.

Mary is keenly aware of her position, and it is this self-awareness and terror that endows the painting with its power. This painting inspires the viewer to religious contemplation and prayer. But it also speaks strongly to universal issues of growth, responsibility and youthful vulnerability.

The traditional Troparion or Hymn of the Day for this day in the Orthodox Church includes these words:

Today is the beginning of our salvation,
And the revelation of the eternal mystery!
The Son of God becomes the Son of the Virgin
As Gabriel announces the coming of Grace.
Together with him let us cry to the Theotokos:
‘Rejoice, O Full of Grace, the Lord is with you!’ 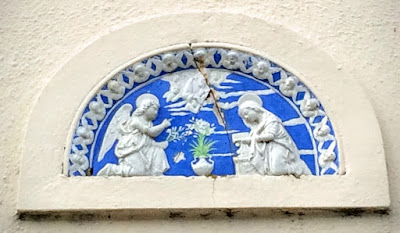 The Annunciation depicted on a panel inset on a house in the village of Castle Bellingham, Co Louth (Photograph: Patrick Comerford)

The Annunciation in a double fresco in the Church of the Panaghia Dexia in Thessaloniki (Photograph: Patrick Comerford, 2018)