How Christians can be
stewards, protectors
and ‘priests’ of creation 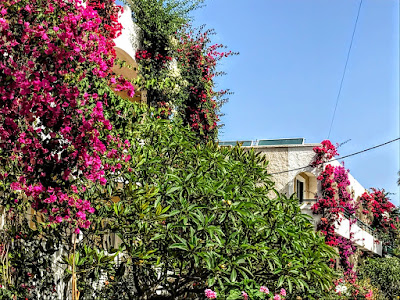 Summer growth in a quiet corner of Platanes in Rethymnon (Photograph: Patrick Comerford, 2018)

When I sit on my east-facing balcony in the Varvara’s Diamond Hotel in Platanes, the sun streams in each morning, and I am surrounded by lemon trees as I enjoy the morning sound of birdsong. The balconies and buildings in this quiet corner of Rethymnon are dripping with bougainvillea and hibiscus, outside each hotel there is row upon row of puts of geranium lots, and there are colourful flowers and plants on every corner and on every set of steps.

Combine these scenes with the rich variety of fresh fruit on display each day in the local supermarkets or the advanced use of solar panels and renewable sources of energy, and I am reminded that not only is there a unique micro-climate in Crete but there is a culturally-embedded approach to the environmental agenda and ecological issues that is quite different in Crete.

Of course, many other parts of Greece are actively engaged in ecological issues. Earlier this week [4 June 2018], Thessaloniki became the first city in Greece to be recognised as a Blue Community, pledging to protect water as a human right and public trust.

In a ceremony, the Mayor of Thessaloniki, Yiannis Boutaris, said, ‘This is in fact an initiative that states that water is a public good, and it promotes the use of tap water to bottled for reasons of environmental protection. We will promote the use of tap water in the City Hall and then in other municipal buildings as well as in catering professionals.’

This week also saw the Ecumenical Patriarch Vartholomaios inaugurate an international environmental conference on the island of Spetses, south-west of Athens.

Patriarch Vartholomaios is known as the ‘Green Patriarch’ because of his environmental priorities, and he is trying to persuade other religious leaders to join the global battle against climate change.

‘Our aim is to affirm a collaborative response to the ecological crisis, while advocating for a sustainable planet as a sacred legacy for all people and especially our children,’ he said.

The Patriarch marked World Environment Day on Tuesday at the Acropolis Museum in Athens, opening the ninth International Ecological Symposium – ‘Toward a Green Attica: Preserving the Planet and Protecting its People.’

In his address, he warned about the dangers posed by waste in the Saronic Gulf, which contains more than 50 percent of the litter to be found in the Greek seas.

Greece’s leading political and financial newspaper Kathimerini devoted over half a page to his speech, in which he said the ‘ecological crisis has revealed that our world constitutes a seamless whole, that our problems are universally shared.’

He called for ‘the convergence and common drive of religions, science and technology, of all social sectors and organisations, as well as all people of goodwill.’

The Ecumenical Patriarchate has long highlighted the spiritual and moral roots of the ecological crisis, and he was challenging: ‘How ironic it is that we have never possessed so much knowledge about our world as today, and yet never before have we been more destructive toward one another and nature.’ 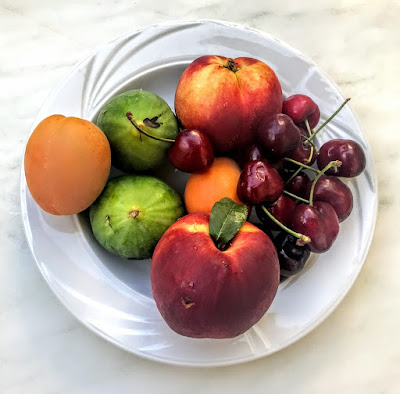 There is an interesting theological underpinning to his address in Athens. ‘For the Orthodox Church, creation care – the preservation of nature and the protection of all people – emanates from the essence of our faith. Any kind of alienation between human beings and nature is a distortion of Christian theology and anthropology.’

He quoted an Orthodox encyclical published two years ago [June 2016] that declared every Christian is called to be a ‘steward, protector and “priest” of creation, offering it by way of doxology to the Creator.”

He spoke of ‘the fundamental connection between ecology and ethics, especially as it relates to social attitudes … the intimate association between war and immigration, especially as it generates forced migration,’ and ‘the vital, transformative role of faith in the lives of individuals, communities and peoples.’

But he was quite clear that ‘much still remains to be done’ on this agenda in Greece. He asked: ‘When will we see a reduction of the unacceptable trash in the surrounding mountainsides of Attica with its deplorable landfills? Or when will we see a solution to the unjustifiable plastic on the floor of the surrounding sea that threatens marine life?’

He pointed out that, like ‘almost half of Greece’s population, more than half of its marine litter lies in the region of the Saronic Gulf. And it is not only the Saronic Gulf. The Ionian Sea is also at risk, threatening residents of Lefkada and the mainland with increasing nonbiodegradable waste from vessels.’

Praising Thessaloniki for becoming the first Blue Community in Greece, he challenged Athens ‘join other cities like Paris and Berlin in promoting the human right to water and defending it as a common good.’

He continued: ‘Moreover, there is an intimate link between caring for creation and worshipping the creator, between an economy for the poor and an ecology for the planet. When we hurt people, we harm the earth. So, our extreme greed and excessive waste are not only economically unacceptable; they are ecologically unsustainable. In fact, they are ethically unforgivable. This is how we must interpret the Lord’s words in the parable of the last judgment: “I was hungry and you gave me food; I was thirsty and you gave me drink” (Matthew 25: 35).’

He said the word ‘Conserving’ implies ‘sharing our concern for the earth and its inhabitants. It signifies the ability to see in our neighbour – in every other person – the face of every human being and ultimately the face of God. This is surely the deeper justification of all that we do – each of us from our own profession, vocation and belief. Otherwise, we cannot say that we demonstrate compassion for our planet and our neighbour, or that we really care about the world’s resources and communities.’

He concluded that we should ‘always bear in mind – beyond any success or failure – our ultimate hope as Christians lies in our Saviour’s humble descent from “the highest” in order to “make all things new” (Revelation 21: 5) and help us ascend into the “righteousness and peace and joy” of the Holy Spirit (Romans 14: 17).’

The concept of the Christian as one who is called to be a ‘steward, protector and “priest” of creation, offering it by way of doxology to the Creator’ is a creative contribution from the Orthodox Church to developing a theology of the environment. 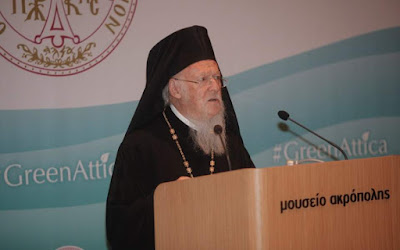 Patriarch Vartholomaios at the ninth international, interdisciplinary and interfaith symposium, ‘Toward a Greener Attica: Preserving the Planet and Protecting its People’ (Photograph: Kathimerini)