Visiting the cathedral in
the old town in Chania 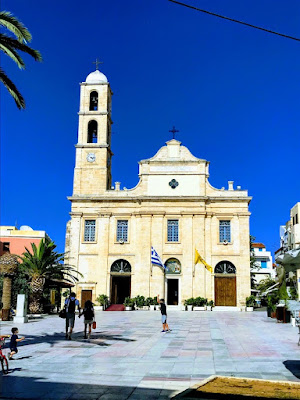 During my visit to Chania, the second city of Crete, this week, I also visited the city’s Greek Orthodox cathedral on Chalidon Street. This is the main street that crosses the old town of Chania from to Eleftherios Venizelos Square in the harbour to 1866 Square in the new town.

Walking from the harbour, Chania’s Cathedral faces Platia Mitropolis or Cathedral Square, a small square on the left-hand or east side of the street, with a statue of Ecumenical Patriarch Athenagoras facing the harbour.

The cathedral is dedicated to the Panagia Trimartyri (the Virgin of the Three Martyrs), the patron of Chania, and the cathedral celebrates its feas-day on 21 November, the feast of the Presentation of the Virgin Mary.

There has been a church on this site since at least the Venetian period, and perhaps even earlier. However, after the Turks captured Chania in 1645, the Ottomans turned the church into a soap factory, and the boiler for the ingredients was where the bell tower now stands.

However, the icon of the Presentation of the Virgin Mary was kept in a storeroom inside the church, with an oil-lamp always lit before it, on the sufferance of the Turkish Pasha of Chania.

In the mid-19th century, a man called Tserkaris worked at the soap factory. According to a local legend, the Virgin Mary appeared to him in a vision and told him to leave, because she did not want her house to be used as a soap factory. Tserkaris left, taking the icon with him, but the church remained a soap factory until the business failed.

A little later, the child of Mustapha Naili Pasha accidentally fell into a well south of the church. In despair, Mustapha Pasha called upon the Virgin Mary to save his child, in return for which he would give the church back to the Christians of Chania.

The child was saved miraculously, and the soap factory was handed over to the Christian community to build a new church, with financial support from the Sultan and the Veli Pasha, the Turkish commander in Crete. Tserkaris then returned the icon of the Presentation of the Virgin Mary in the Temple

The church was completed in 1860, built in the style of a three-aisled basilica. The middle aisle is higher and covered by a pointed arch. The other aisles are covered by cross-ribbed vaults and are divided vertically by the women’s balcony.

The architectural elements of the cathedral are associated more with the tradition developed in the period of the Venetian occupation: sculptured pseudo-pillars, cornices and arched openings. The east wall is decorated with large and impressive icons.

The cathedral was frequently used as a place of refuge and suffered much damage during the Cretan revolt of 1897. It was restored at the expense of the Russian Tsar, to make amends for the Russian bombardment of Akrotiri. The bell-tower on the north-east side of the cathedral bell was also a gift from the Tsar.

Trimartiri also suffered a lot of damage during the German bombing of Chania in May 1941. The cathedral was carefully restored in the post-war years, and today, because of its central location in the old town, and the attractive square in front, it is constantly visited by tourists. 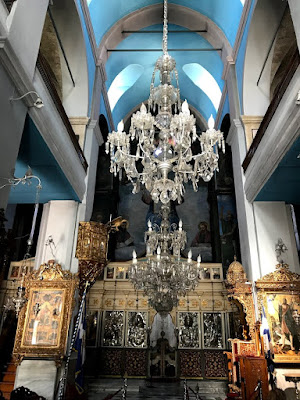 Inside the Cathedral of the Panagia Trimartyri in Chania (Photograph: Patrick Comerford, 2018)