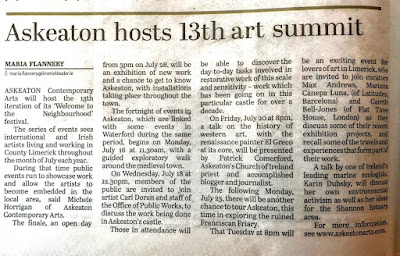 Askeaton Contemporary Arts will host the 13th iteration of its ‘Welcome to the Neighbourhood’ festival.

The series of events sees international and Irish artists living and working in County Limerick throughout the month of July each year.

During that time public events run to showcase work and allow the artists to become embedded in the local area, said Michele Horrigan of Askeaton Contemporary Arts.

The finale, an open day from 3pm on July 28, will be an exhibition of new work and a chance to get to know Askeaton, with installations taking place throughout the town.

The fortnight of events in Askeaton, which are linked with some events in Waterford during the same period, begins on Monday, July 16, at 11.30am, with a guided exploratory walk around the medieval town.

On Wednesday, July 18 at 12.30pm, members of the public are invited to join artist Carl Doran and staff at the Office of Public Works, to discuss the work being done in Askeaton’s castle.

Those in attendance will be able to discover the day-to-day tasks involved in restorative work of this scale and sensitivity – work which has been going on in this particular castle for over a decade.

On Friday, July 20, at 8pm, a talk on the history of western art, with the renaissance painter El Greco at its core, will be presented by Patrick Comerford, Askeaton’s Church of Ireland priest and accomplished blogger and journalist.

The following Monday, July 23, there will be another chance to tour Askeaton, this time in exploring the ruined Franciscan Friary.

That Tuesday at 8pm will be an exciting event for lovers of art in Limerick, who are invited to join curators Max Andrews, Mariana Cápena Luna, (of Latitudes, Barcelona) and Gareth Bell-Jones (of Flat Time House, London) as they discuss some of their recent exhibition projects, and recall some of the travels and experiences that form part of their work.

A talk by one of Ireland’s leading marine ecologists, Karin Dubsky, will discuss her own environmental activism as well as her ideas for the Shannon Estuary area.