Christ healing the woman in the crowd … a modern Orthodox icon

May I speak in the name of God, + Father, Son and Holy Spirit, Amen.

This morning’s Gospel reading (Mark 5: 21-43) tells two stories about Christ’s response to the plight of two very different women: a 12-year-old girl who is on her deathbed, and a woman who has been suffering for the previous 12 years, as long as the young girl has lived.

Both of them remain unnamed, like so many women in the New Testament.

One is the daughter of a leading male figure in the synagogue. But religious position and social status in the local community are of precious little value when a small girl is at the point of death.

In both cases, hope has run out for a little girl and for an old woman. In restoring their health, Christ teaches what faith means, Christ offers new hope, and Christ shows what love is.

In both cases, these women are ritually unclean … a bleeding older woman, and a dying young woman. Jesus should not touch them. Yet their plight touches his heart, and he reaches out to them with a healing touch.

This Gospel passage presents us with a large cast of dramatis personae, people who receive the gentle, caring, loving pastoral attention of Christ in equal measure, each within the list of people we are told should be our priority.

The crowd who gather around Jesus by the lake are going to learn what the Kingdom of God is like, not through another sermon or another lecture, but by seeing what Jesus does. After hearing this Gospel story, would each and every one of them be happy to wear one of those wristbands with the initials ‘WWJD’ – ‘What Would Jesus Do?’ If they looked at our actions for an example of Christian lifestyle, would they know what Jesus does?

Jairus is a respected provincial leader. He shows what true worship truly is when he throws himself at the feet of Jesus. He prays, entreats, begs, not on behalf of himself, but on behalf of a sick and dying girl. If we were to look at ourselves today, would we see ourselves placing our lives at the feet of Christ, and making our first priorities the needs of others who cannot speak for themselves?

By now the large crowd is pressing in on Jesus. They really want to see what he is about, what the Christian lifestyle is about. And who becomes the focus of attention within this crowd?

Too often in a crowd, it is those who get to the front first, who have the loudest voices, who are heard and whose demands are met.

In this case, though, it is not the loud and the proud, the rich or the famous, who grab the attention of Christ – it is a weak, timid, neglected impoverished, exploited and sick woman. All her money has gone on quacks, and she has no man to speak up for her.

But look at what Christ does for her. Without knowing it, he heals her. And when he realises what has happened, he calls her ‘Daughter.’

In a society where men had the only voices, where to have a full place in society was to be known as a Son of Israel, she is called ‘Daughter.’ She too has a full and equal place in society, she is commended for her faith, she is restored personally and communally, she is offered healing, and she is also offered peace. From now on, she can be at one with herself, with her society, with the world and with God.

But perhaps there was a danger that all this could become a sideshow for the crowd. Poor Jairus appears to have been forgotten. His household – perhaps religious and community leaders too – tell him to give up on Christ.

Christ does not want to put on a show, either to impress the pressing crowd, or to prove wrong the inner circle around Jairus. Instead, with just his three closest friends – Peter, James and John … the three disciples who would soon witness the Transfiguration – he goes directly to the house of the dying girl, where her family and neighbours are in great distress.

It is shocking that the first reaction of some of the key local figures is to upbraid Jairus for seeking whatever help he can find for his daughter, and not to offer him comfort and sympathy. We can see that in his despair this man was finding no hope from his own community.

Their lack of compassion and sympathy contrasts sharply with the compassion Christ shows for the woman who has been suffering for 12 years. She has spent all her money with consultants and doctors and specialists. None of them has been able to offer a cure, and now that all her money has run out, all her hope has run out too. All this is compounded by the fact that she is ritually unclean … no man should come near her.

Even as he was being told not to bother coming, even when he was being laughed at, Christ keeps focussed on who is important here – not those who shout the loudest and who press their demands.

Twelve-year-olds have no say and no voice and no power. But Jesus now offers this girl new life, new hope, a new future, a full place in society. When Jesus was her age, he was in the Temple. God becomes present in the presence of the young and vulnerable.

I am going to spend the next three days at the annual conference of the Anglican mission agency USPG (the United Society Partners in the Gospel) in High Leigh, Hertfordshire. Three years ago at this conference (2015), I heard powerful and engaging stories of how projects supported by USPG are empowering women, from these islands to South Africa, from the West Indies and West Africa to India and Pakistan.

Sheba Sultan from the Church of Pakistan described the lives of women in Pakistan, from tribal people with few resources and many restrictions, to the elite women who have lives of luxury but find cultural values also stop them from living life to the full.

Anjun Anwar, a Muslim woman born in Pakistan, spoke of her experiences on the staff of Blackburn Cathedral.

The Revd Dr Monodeep Daniel shared the work of the Delhi Brotherhood in challenging gender-based violence, including rape and murder.

The Revd Dr Miranda Threlfall-Holmes from Durham talked about gender justice and shared a vision of equality for men and women who are created equally in the image and likeness of God, who are made one in Christ, who are called and equipped by the Holy Spirit, and who live with the promise of abundant life for all.

We were challenged each day that week to ask ourselves: how is the Gospel good news for women?

Speaker after speaker insisted it is Good News – but only if we read it, accept its consequences for us, and then live it out.

The Gospel is Good News for the two women in our Gospel reading: they are at opposite ends of the scale in terms of both social status and age. Yet one does not come before the other.

The younger woman is restored to her place in her family and in her community. The older woman, who has lost everything, who is at risk of being marginalised even by the Disciples, is offered the hope of her proper place.

Christ has equal compassion for both, and restores them to full life, physically, spiritually and socially, despite objections from men on the scene – the privileged men who have access to the house of Jairus, or the men around Christ who find that a poor, old sick woman is embarrassing.

The Gospel is Good News for women like these two women in this morning's reading, for the women I have heard at USPG conferences. But it is only good news if we hear it and then put it into practice. 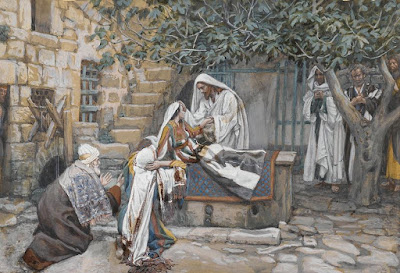 21 When Jesus had crossed again in the boat to the other side, a great crowd gathered round him; and he was by the lake. 22 Then one of the leaders of the synagogue named Jairus came and, when he saw him, fell at his feet 23 and begged him repeatedly, ‘My little daughter is at the point of death. Come and lay your hands on her, so that she may be made well, and live.’ 24 So he went with him.

And a large crowd followed him and pressed in on him. 25 Now there was a woman who had been suffering from haemorrhages for twelve years. 26 She had endured much under many physicians, and had spent all that she had; and she was no better, but rather grew worse. 27 She had heard about Jesus, and came up behind him in the crowd and touched his cloak, 28 for she said, ‘If I but touch his clothes, I will be made well.’ 29 Immediately her haemorrhage stopped; and she felt in her body that she was healed of her disease. 30 Immediately aware that power had gone forth from him, Jesus turned about in the crowd and said, ‘Who touched my clothes?’ 31 And his disciples said to him, ‘You see the crowd pressing in on you; how can you say, “Who touched me?” ’ 32 He looked all round to see who had done it. 33 But the woman, knowing what had happened to her, came in fear and trembling, fell down before him, and told him the whole truth. 34 He said to her, ‘Daughter, your faith has made you well; go in peace, and be healed of your disease.’

35 While he was still speaking, some people came from the leader’s house to say, ‘Your daughter is dead. Why trouble the teacher any further?’ 36 But overhearing what they said, Jesus said to the leader of the synagogue, ‘Do not fear, only believe.’ 37 He allowed no one to follow him except Peter, James, and John, the brother of James. 38 When they came to the house of the leader of the synagogue, he saw a commotion, people weeping and wailing loudly. 39 When he had entered, he said to them, ‘Why do you make a commotion and weep? The child is not dead but sleeping.’ 40 And they laughed at him. Then he put them all outside, and took the child’s father and mother and those who were with him, and went in where the child was. 41 He took her by the hand and said to her, ‘Talitha cum’, which means, ‘Little girl, get up!’ 42 And immediately the girl got up and began to walk about (she was twelve years of age). At this they were overcome with amazement. 43 He strictly ordered them that no one should know this, and told them to give her something to eat.

‘Christ raises the daughter of Jairus’ (left), in the Hardman window by JH Powell at the west end of the nave in Saint Nicholas Church, Adare, Co Limerick (Photograph: Patrick Comerford, 2018)

Almighty and everlasting God,
by whose Spirit the whole body of the Church
is governed and sanctified:
Hear our prayer which we offer for all your faithful people,
that in their vocation and ministry
they may serve you in holiness and truth
to the glory of your name;
through our Lord and Saviour Jesus Christ. 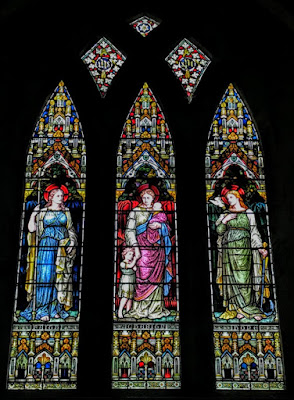