Valentia Island: home
of the Knights of Kerry
and transatlantic cables

For the people of Valentia Island, Ireland is ‘the other island.’ They say, ‘you can do Ireland in a day, but you really only do Valentia properly in a lifetime.’

So, let me confess, I spent just a day on Valentia Island at the beginning of summer, and realise that I only got a taste of the island.

I had not been to Valentia for over 50 years, and during a return visit to Ballinskelligs and the Ring of Kerry we decided to do some ‘island hopping’ in Ireland in advance of our island holiday in Greece – viewing the Skelligs Rocks and visiting Valentia Island at the south-west tip of Co Kerry.

We were on the Wild Atlantic Way, but little did we realise as we drove around Valentia in the summer sunshine that we were missing some of the major sites that tourists normally visit, including the Slate Quarry, the Lighthouse at the Cromwell Fort, Geokaun Mountain and its spectacular views, Bray Head and Signature Point.

But we enjoyed Valentia Island Farmhouse Ice Cream, sitting in a parlour looking out at the pastures where the cows that produced the milk were grazing on the Daly family’s farm. 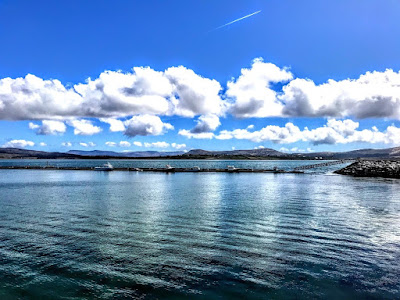 Like many visitors, I had presumed that Valentia received its name from Valencia in Spain – perhaps thanks to Spanish traders or survivors of the Armanda. But I was wrong. Valentia Island is known in Irish as Inse Dairbhre, or the ‘Island of the Oak Wood,’ and the name Valentia comes from a settlement on the island called An Bhaile Inse or Beal Inse (‘mouth of the island’ or ‘island in the mouth of the sound’). 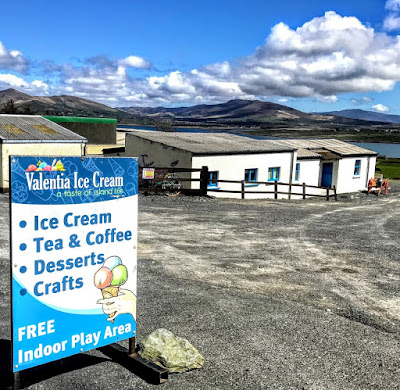 Valentia Island, off the Iveragh Peninsula, is one of Ireland’s most westerly points. It is about 11 km (7 miles) long, 3 km (2 miles) wide, and has a population of 665.

It is linked to the mainland by a bridge at Portmagee, and during the summer months (April to October) the island is also served by a car ferry between Reenard Point, near Cahersiveen and Knightstown, the island’s main village. There is a second, smaller village at Chapeltown, in the middle of the island, about 3 km from the bridge.

Mug Ruith, or Mogh Roith, ‘slave of the wheel,’ a mythological, powerful, blind druid of Munster, is said to have lived on Valentia Island. It was believed he could grow to enormous size, and that his breath caused storms and turned men to stone. 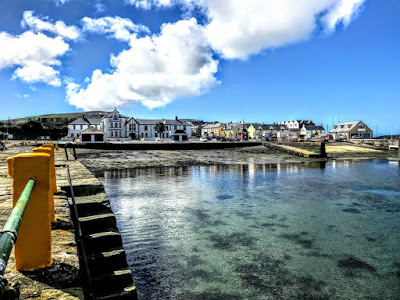 Knightstown, the main town on Valentia Island, takes its name from the Knights of Kerry (Photograph: Patrick Comerford, 2018)

Trade with Spain was important in the 16th century, when Spanish wine was sold on board ships at Portmagee and in the waters around Valentia Island.

Until the 17th century, much of the island was owned by the O'Sullivans, headed by the O’Sullivan Beare.

The Annesley family became the principal landowners on the island in 1653, and the other major landholder was Trinity College Dublin.

Richard Annesley assumed the tiles of sixth Earl of Anglesey and seventh Viscount Valentia in 1737. But a scandal unfolded as James Annesley challenged his claims, saying he had been born in Bunclody, Co Wexford, as the rightful heir, but had been kidnapped and sold into slavery by his uncle.

The title of Knight of Kerry, sometimes called the ‘Green Knight,’ is one of three hereditary knighthoods in branches of the FitzGerald family since the Battle of Callan in 1261. The other two were the White Knight and the Knight of Glin (the ‘Black Night’). 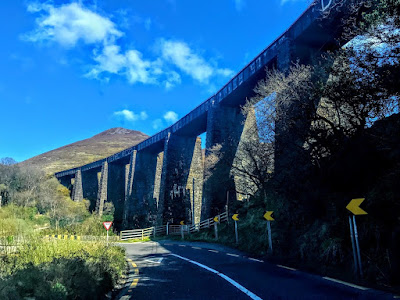 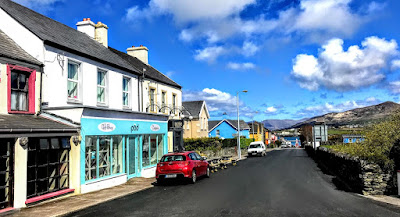 Eventually the Knights of Kerry bought out their leases from the Annesley family. They remained the principal landlords on Valentia for generations, and had their home at Glanleam, near Knightstown.

The estate was finally bought out in 1807 by Sir Maurice Fitzgerald (1772-1849), 18th Knight of Kerry and Vice-Treasurer in the Duke of Wellington’s government. According to family tradition, Sir Maurice attended the celebrated ball on the eve of the Battle of Waterloo in 1815.

His title gave its name to Knightstown, the principal settlement on the island, which he planned and built. His guests on Valentia Island included the Duke of Rutland, the war journalist William Howard Russell (1820-1907) from Tallaght, who reported on the Crimean War for The Times; the three-times Prime Minister Lord Stanley, later the Earl of Derby; and the poet Alfred Lord Tennyson. It is said that his visit to Valentia inspired Tennyson’s well-known lines: 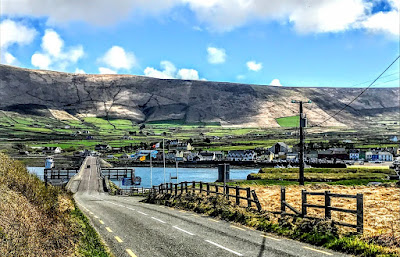 At the north-east corner of the island, the subtropical gardens at Glanleam House. are protected by windbreaks from Atlantic gales. They are never touched by frost, and they enjoy the mildest microclimate in Ireland. Although Valentia Island is on the same latitude as Newfoundland, it enjoys much milder winters and the effects of the Gulf Stream mean the island can support many sub-tropical varieties of plants.

The gardens owe their origins to Sir Peter George Fitzgerald (1808-1880), the 19th Knight of Kerry, who planted them in the 1830s and stocked them with a unique collection of rare and tender plants from South America, Australia, New Zealand, Chile and Japan.

Sir Peter FitzGerald was Vice-Treasurer of Ireland in the last government of Sir Robert Peel. He succeeded his father in 1849 and lived almost constantly on Valentia Island. He was a benevolent landlord, improving the estates, and enhancing the welfare of his tenants. Local tradition says that the tenants of Trinity College Dublin were worse off and were ‘rack-rented.’

Sir Peter was instrumental in introducing and developing flax growing and weaving, the railway terminal at Renard Point, the seaport in Valentia Harbour, the European end of the transatlantic cable, a slate quarry, and planning and building Knightstown, which was named after him. 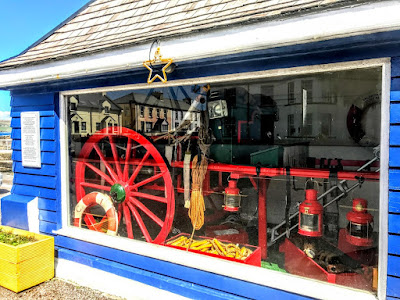 Two pioneering scientists, Benjamin Apthorp Gould (1824-1896) and AT Mosman, built a longitude observatory beside the Cable Station in 1866. Valentia Observatory, which is part of Met Éireann, the Irish Meteorological Service, dates from 1868. The Valentia Island Weather Station is 25 metres above sea level and is one of the 22 coastal weather stations whose reports are broadcast as part of the BBC ‘Shipping Forecast.’ Valentia Island is, on average, the wettest weather station in Ireland.

The transatlantic telegraph cables continued to operate from Valentia Island for 100 years until in 1966.

The 19th Knight of Kerry also organised many royal visits to the island. Queen Victoria’s son, Prince Albert Edward, later King Edward VII, visited in 1858. When his younger brother, Prince Arthur, Duke of Connaught, visited in 1869, the name of Young’s Hotel in Knightstown was changed to the Royal Hotel. 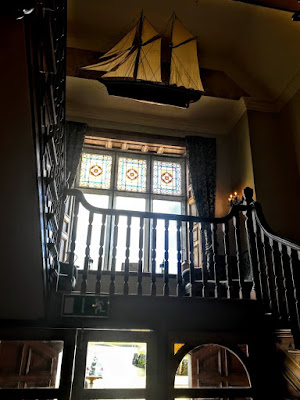 On 8 July 1880, Sir Peter was given the additional hereditary title of baronet. But he died less than a month later on 6 August 1880. His title and estates passed to his eldest son, Sir Maurice FitzGerald (1844-1916), as second baronet and 20th Knight of Kerry. He was the last of the family to live on Valentia Island. His wife Amélie Bischoffsheim (1858-1947), was a daughter of the Dutch banker Henri Louis Bischoffsheim (1829-1908).

The Bischoffsheim family founded three of the largest banks in the world: the Deutsche Bank, Parisbas Bank and Societe Generale. Lady FitzGerald’s sister, Ellen (1857-1933), married William Cuffe (1845-1898), 4th Earl of Desart; Lady Desart, who lived at Desart Court, Co Kilkenny, later became President of the Gaelic League and a Senator (1922-1933) in the new Irish Free State, and she has been described as ‘the most important Jewish woman in Irish history.’

Sir Maurice’s sisters, Elizabeth Anne and Julia, both married Francis Spring Rice (1852-1937), 4th Baron Monteagle, and his son, Charles Spring Rice (1887-1946), like many members of the Spring Rice family, was brought up at Glanleam House on Valentia Island. 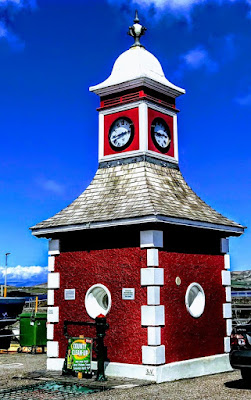 The slate quarry which opened in 1816, closed after a landfall in 1911, provided slates for the House of Parliament in Westminster. Bewicke Blackburn, the engineer and quarry manager, was the father of Helen Blackburn (1842-1903), a leading women’s rights campaigner and suffragette, who was born on Valentia.

The noted naturalist and biologist Maude Jane Delap (1866-1953) was the seventh of ten children of the Revd Alexander William Delap (1830-1906), who moved to Valentia Island when he became the Rector of Cahersiveen. She lived and worked in Knightstown, carrying out important research into the marine life surrounding Valentia and identifying many new species. 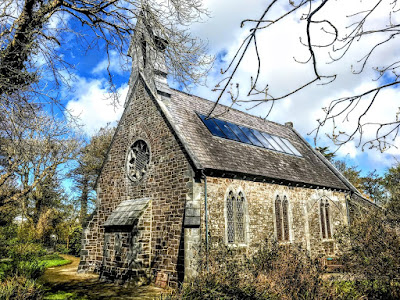 The Church of Saint John the Baptist was one of the last churches designed by Joseph Welland (Photograph: Patrick Comerford, 2018)

The Church of Ireland parish church, Saint John the Baptist, is one of the last churches designed by Joseph Welland (1798-1860). It was built in 1860, replacing an earlier church built in 1815. The stained-glass windows are memorials to the Knights of Kerry. 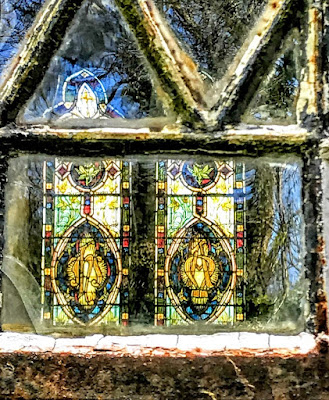 A sign claims the church is the ‘most westerly Protestant church in Europe.’ It is open from May to September, and is the venue for an ecumenical Christmas service and regular musical recitals and lectures. The Sensory Garden was designed by Arthur Shackleton to cater for people with disabilities, and was opened by Bishop Michael Mayes in 2005. 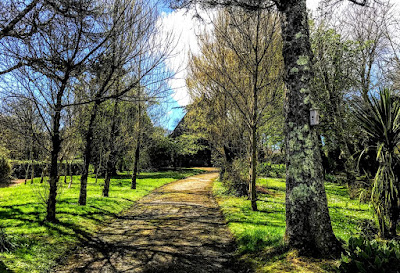 The Sensory Garden in the grounds of Saint John’s Church was designed by Arthur Shackleton and opened in 2005 (Photograph: Patrick Comerford, 2018)

The FitzGerald and TCD estates on Valentia were sold by the Congested Districts Board in 1913. Today, the FitzGerald family titles are held by Sir Adrian James Andrew Denis FitzGerald, 6th Baronet of Valentia and 24th Knight of Kerry.

Meanwhile, the title of Viscount of Valentia has passed through obscure lines of descent in the Annesley family and is held by Francis Annesley, the 16th Viscount, who succeeded in 2005. Lord Valentia is also Ireland’s premier baronet, although he has not successfully proven his right to the titles.

The Royal Valentia Hotel has been operated by the Kidd family since 2004, and has been lovingly restored over the past decade. 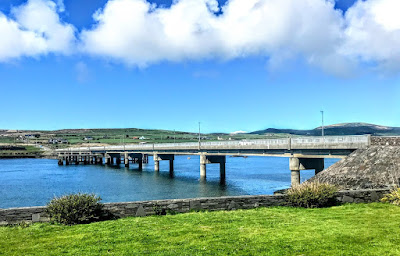 This feature was published in July 2018 in the ‘Church Review' (Dublin and Glendalough) and the ‘Diocesan Magazine' (Cashel, Ferns and Ossory) 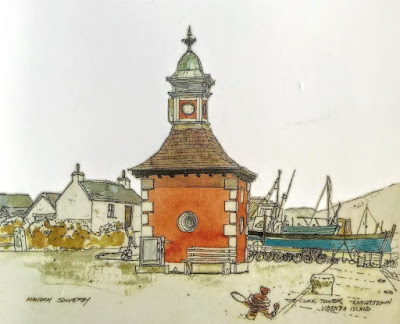 This is a magnificent record of Valentina Island. I grew up in nearby Cahersiveen town and I spent my summers during school break working in Glanleam Estate.
This remarkable detailed and very readable description of the physical beauty of the Island as well as its remarkable history including the list of remarkable personalities makes for a great read.
I’m delighted to have stumbled upon this article and I’m amazed it hasn’t received the acclaim it deserves.