Who would I invite to the banquet?
And who would I exclude? 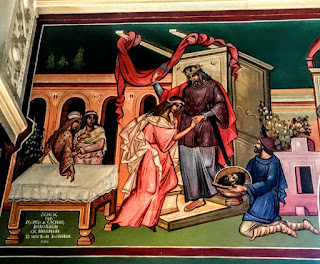 It inspired him, under the penname of Anthony Hope, to write his novel, The Prisoner of Zenda.

I so often hear people expressing a lack of personal confidence when they are being complimented on some success or achievement. They so easily put themselves down with sayings such as: ‘If they only knew what I’m really like.’

This is a recurring theme for poets, writers and philosophers, including John Donne, Izaak Walton, Shelley, Goethe and Dostoyevsky.

More recently, it was the theme in John Boorman’s movie The Tiger’s Tail (2006). Brendan Gleeson plays both the main character and his protagonist – is he his doppelgänger, a forerunner warning of doom, destruction and death? Or is he the lost twin brother who envies his achievements and lifestyle?

As well as attracting similar followers and having similar messages, did these two cousins, in fact, look like one another physically?

If Herod is deranged or exasperated, then his courtiers are confused. Some of them say Christ is Elijah, others say Christ is ‘a prophet, like one of the prophets of old.’ The old order is passing away, a new order is being ushered in as part of God’s great plans for humanity and for the whole of creation.

In this way, we too are forerunners; we who know the wonder of God’s promises are the forerunners of those who will benefit from and be blessed by the completion of God’s eternal purposes, uniting all creation, all ‘heaven’ and ‘earth’ (see Ephesians 1: 3-14).

To be a disciple is to follow a risky calling – or ought to be so. And with Herod’s maniacal and capricious ways, discipleship has become an even more risk-filled commitment.

Christ, on the mountainside, feeds all, and although all we can offer is five loaves and two fish, more than 5,000 are fed – and even then, 12 baskets are left over.

During these tough times, people ought not be ashamed if they and their families need food and shelter. Everybody has the right to food and housing.

Christ’s banquet is an invitation to build the kingdom and to new life.

(Revd Canon Professor) Patrick Comerford is Precentor of Saint Mary’s Cathedral, Limerick, and Priest-in-Charge, the Rathkeale Group of Parishes. This sermon was recorded for a broadcast service on RTÉ 1 on Sunday 15 July 2018 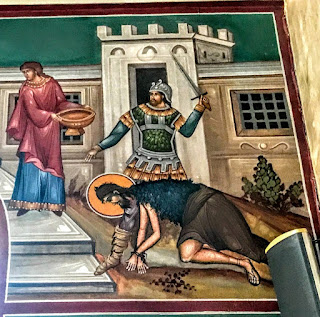