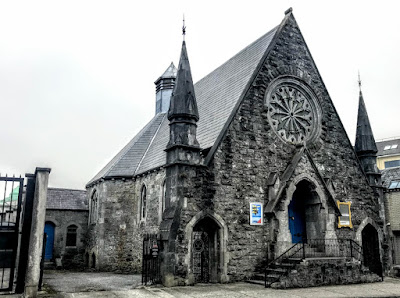 Athlone’s strategic location on the banks of the River Shannon and on a key river crossing between east and west, between Leinster and Connaught, made for a turbulent history.

But in more peaceful times, Athlone has blossomed into a tourist hub in the Midlands and as the gateway town for Lough Ree and waterway gems like Clonmacnoise.

Its shops and restaurants may tempt visitors to stay a little longer, and it also has major sites of historical and architectural interest, including Athlone Castle, the Church of Saint Peter and Paul, whose architecture and stained-glass windows I was discussing yesterday [16 August 2018], and Saint Mary’s, the Church of Ireland Parish Church, with its unusual detached tower.

But there are interesting buildings in the side streets too, although tourists may not notice them so readily. The Methodist Church in Northgate Street is one of these and is close to both the town bridge and Church Street, the main thoroughfare and shopping area in Athlone.

The first Methodist society was formed in Athlone after John, the founding figure in Methodism, visited the Midlands town in 1748. He visited Athlone on many occasions, when he preached mainly outdoors on the bridge or in a friend’s house. 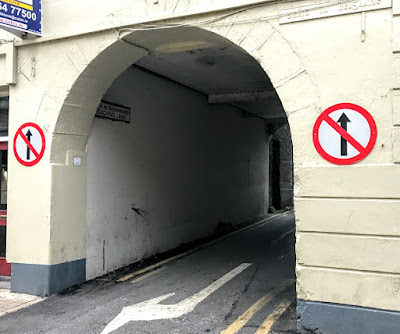 The first Methodist chapel in Athlone was built in Preaching Lane in 1767 (Photograph: Patrick Comerford, 2018)

The first Methodist chapel in Athlone was built in 1767 in Preaching Lane, close to Court Devenish House and a short distance from the present church. That first church was built at his own expense by Samuel Simpson, a Justice of the Peace.

A new building, named Epworth Hall after the rectory where Wesley was born, was built in 1769, opposite the site of the present church.

This attractive church was designed by the Dublin-born architect Alfred Gresham Jones (1822-1913).

Jones was the son of George Jones, merchant tailor, and his wife Sarah. He entered the Royal Dublin Society’s School of Architectural Drawing in 1842. He spent some time in London, but was back in Dublin by 1850, when he was working from both 16 Dawson Street, Dublin, where George Jones had his tailoring premises, and 10 Grafton Place, Kentish Town, London.

Jones was working for the architect John Skipton Mulvany in 1852. A year later, in 1853, he was working from his father’s house at 7 Garville Avenue, Rathgar. Then in 1854 he formed a partnership with Hugh Carmichael that lasted until Carmichael’s death in 1860. From then on, he practised on his own, and he was elected a Fellow of the Royal Institute of Architects in Ireland (FRIAI) in 1864.

His pupils and assistants included George Palmer Beater, Thomas Phillips Figgis, and William H Mackenzie. He emigrated to Australia in 1888, when he was in his mid-60s, and started a successful practice in Melbourne. He died, aged 91, in Melbourne in 1913.

The band of the Royal Artillery played for the 1,200 people present as the foundation stone of Athlone Methodist Church was laid by JC Evans on 25 February 1864. The builder was George Granville of Ballinasloe, Co Galway, and the estimated cost was £1,700-£1,800. 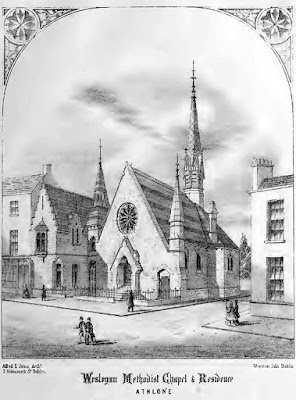 The church was completed largely as Jones had planned it, with the exception of the planned manse. Like many Methodist chapels of this period on these islands, it has an octagonal sanctuary to the west. The church was about 55 ft long and 22 ft wide, terminating in an octagonal form, with the pews radiating round the platform enclosure. The pews could seat about 250 people, and there was a gallery at one end. The octagonal end was surmounted by an ornamental spire, that could be seen along the banks of the River Shannon.

This is an unusual design for a Methodist church in Ireland, where Methodist churches tend to be quite plain in their design and decoration. The two side gateways are incorporated into the main façade, surmounted by two solid pinnacles.

The ashlar dressings to the rock-faced limestone walls underline the appealing contrast of textures evident in this church. The church has ashlar limestone spirelets on an octagonal plan on each side of entrance front (east). There is an octagonal plan sanctuary to the rear (west).

There are pointed-arched openings with cusped heads to the nave of the church, and a rose window above entrance. The pointed-arched entrance is set in a slightly projecting gable-fronted porch with timber double-doors, flanked by pointed arched entrances. The church faces onto the street, and cut-stone steps lead up to the front.

Cast-iron gates on either side of the church give access to the rear.

When the new church opened on 3 March 1865, the Epworth Hall was transformed into a Methodist school and was later sold to a local printing company. 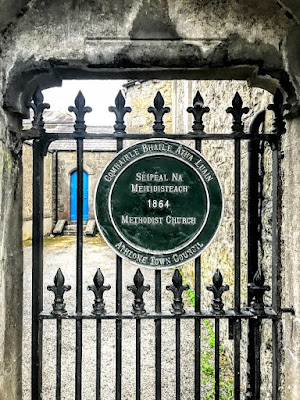 The tall spire-like lantern originally placed over the west end became unsafe and was removed in the 1950s. Over the years, a vestry and toilets were built on to the rear of the church, and the roof was replaced in recent years.

Methodist ministers in Athlone lived in the manse until 1958, when Birr and Athlone came together with one minister living in Birr. Tullamore joined the circuit in 1973.

Today, Athlone Methodist Church has seating for about 120 people for worship and the vestry can accommodate about a dozen children for Sunday School. Sunday services take place at 10 a.m., and the Superintendent Minister is the Revd Clodagh Yambasu. The church remains an important part of the historic streetscape on the east or Westmeath side of Athlone. 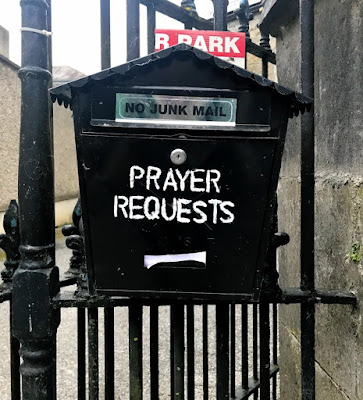