Hanging pictures with meaning
from Venice, France and Cyprus 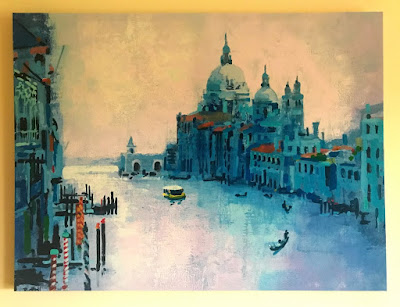 My taste in art is wide, and both deep and shallow at one and the same time.

The works on my walls include icons, original paintings, and old photographs of houses I have lived in or that are associated with the Comerford and Comberford families in the past.

I am happy to frame old postcards, prints and bookplates, hang up posters from art exhibitions may years ago, and even frame photographs of houses and pre-war Greek banknotes that have gone out of circulation and have long lost their value and currency.

Last weekend, we had friends to stay in the rectory, and in a moment of haste we bought two large prints to fill walls on two of the guest bedrooms that had looked a little bare for a little too long.

One shows the Grand Canal in Venice, with the Basilica di Santa Maria della Salute, a sight I have known in the past and hope to see again before the end of the year. 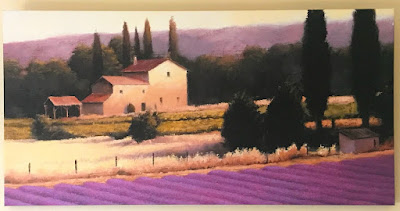 A field of lavender in France … or is it Tuscany?

Another shows a field of lavender. It could be in France, it could be in Tuscany, but wherever it is it is a reminder of bright summer days as the autumn evenings begin to close in and begin to realise that winter follows soon after.

The microclimate in Askeaton is noticeably different and much wetter than other places I have lived in on these islands, so I need reminders of summer sunshine and holidays on the continental as the days get wetter and the clouds become turn greyer.

I suppose I am also missing some of the paintings and prints hanging on the walls and on the stairs at home in Knocklyon. 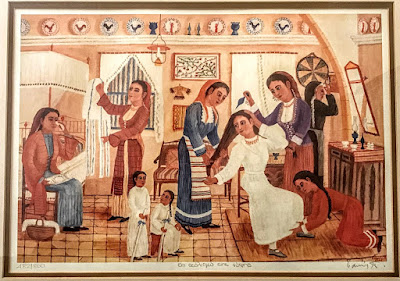 A bride prepares for her wedding in Cyprus

One is a bright, colourful picture of a bride preparing for her wedding. I bought this limited edition print in Nicosia when I was working in Cyprus during Easter 2000, just a few weeks before my ordination.

Another is a second limited edition print also bought in Nicosia that Easter, and shows two small boys, probably brothers, the older boy protecting his younger brother, who may have been blinded. They are Greek Cypriot refugees from Northern Cyprus, huddled in a tent after fleeing the Turkish invasion in 1974.

I had visited Cyprus earlier in 1987, and the memories of the Turkish invasion were raw then and continued to hurt deeply when I returned in 2000. 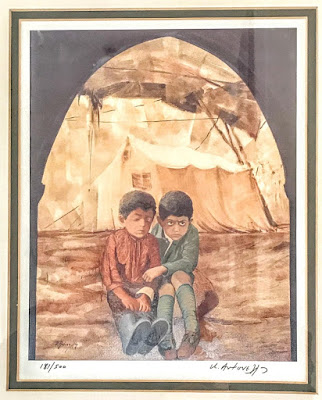 Two refugee boys from Northern Cyprus huddled in a tent

At the time I bought this print in Nicosia, I was hurt broken as it reminded me of my own two sons back home in Dublin, and I fretted and prayed about their future.

After framing the print, I came across a copy of the original photograph of the two boys who inspired this print or painting. It is still heart-breaking. I wonder whatever happened to these boys, who must now be in their mid-40s, and I still pray for them.

But the plight of the refugees in the Mediterranean still lives with us, and that image continue to remind me to speak up today for the refugees and to condemn our poor response to their plight and needs.