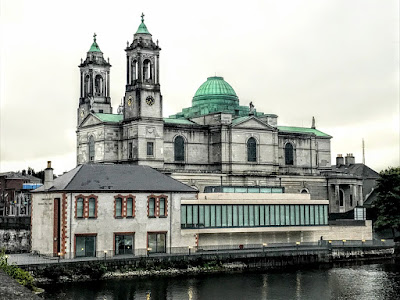 The Church of Saint Peter and Saint Paul dominates the west bank of the River Shannon in Athlone (Photograph: Patrick Comerford, 2018)

My few days at Wineport Lodge on the shore of Lough Ree this week offered the opportunity to visit a number of cathedrals and churches in the Midlands, including the Church of Saint Peter and Saint Paul in Athlone, Co Westmeath.

This towering church stands on a prominent site on the Roscommon or Connaught side of Athlone and it dominates the west bank of the River Shannon in the centre of the town. The size and scale of this church means it is often mistaken for a cathedral, and it is certainly a monumental witness to the confidence, power and the authority of the Roman Catholic Church in post-independence and pre-war Ireland.

The church was built between 1932 and 1939, and it is a superb essay in a Baroque style, with many classical references. It is defined by strong horizontal lines and has planar layers of carefully designed facades. The whole composition, inside and outside, is handled strongly, with skilful mastery of its spaces, the materials and its details. 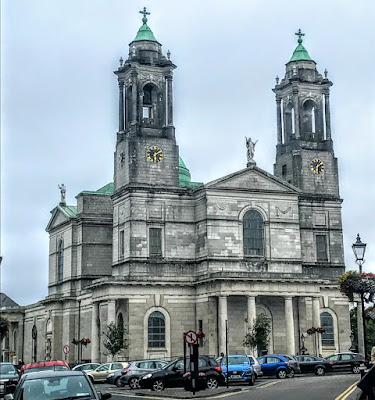 The Church of Saint Peter and Saint Paul is a monumental witness to the confidence of a post-independence church (Photograph: Patrick Comerford, 2018)

This is a three-bay, double-height church, with copper-plated pitched roofs, a copper dome and twin towers with clock faces that flank the pedimented entrance façade.

The church is built on a north-south axis, instead of an east-west axis, and has an apsidal chancel on the north or liturgical east side. The towers are surmounted by Doric Baroque campaniles, each crowned by an octagonal tower and an ogee copper dome with a cross finial above.

The projecting central bay on the front façade (south) has a single-storey, tetrastyle Doric porch. The ground floor is built in Portland stone, with ashlar limestone above.

There is a round-headed recess with double timber panelled doors at the centre of the main façade. 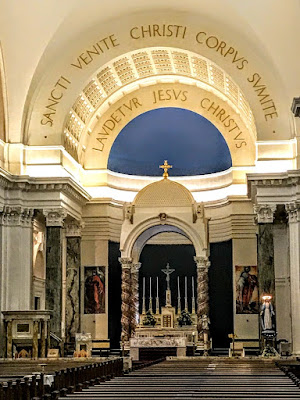 Inside, the spacious interior is formed by three vaulted cells supported on Corinthian pilasters made of Connemara marble shafts. The baroque baldacchino is supported on barley sugar columns in red and white marble, and its design may have been inspired by Bernini’s baldacchino in Saint Peter’s Basilica, Rome.

The richly adorned side chapels have mosaic work by the Alinari brothers, and a number of marble statues, including copies of Michelangelo’s Pieta in Saint Peter’s Basilica, Rome, and of Michelangelo’s statue of Moses in the Church of San Pietro in Vincoli in Rome.

The stained-glass windows in the church include works by the Harry Clarke Studio, as well as windows by AE Child, Sarah Purser and the Earley Studios.

The church is set back from the road in its own grounds with cut-stone gate piers, turned through 45 degrees, surmounted by cast-iron lamp standards. There is a snecked limestone wall to the road frontage.

The site of Saint Peter and Saint Paul was part of Custume Barracks until 1930 and had previously housed an armour store and a schoolhouse. The Roman Catholic Church built ordnance stores in Custume Barracks to compensate the military for this loss of site.

This impressive church dominates the skyline of the west side of Athlone and contributes very significantly to the architectural heritage of the locale. However, this church seems slightly out of place in its riverside location facing the massive bulk of the mediaeval castle. 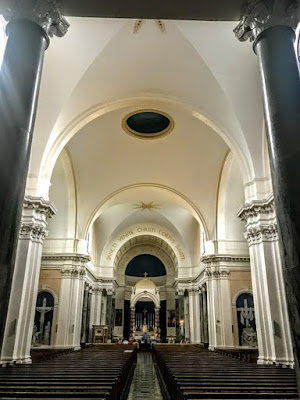 Inside the Church of Saint Peter and Saint Paul … a triumph of 20th century classicism (Photograph: Patrick Comerford, 2018)

This church is a triumph of 20th century classicism by the Dublin-born architect Ralph Henry Byrne (1877-1946), who brought a range of international influences to create a unique fusion of historical style with a contemporary interpretation.

Byrne was born in Largo House, 166 Lower Rathmines Road, Dublin, on 25 April 1877, the third but second surviving son of the architect William Henry Byrne (1844-1917), who had been a pupil of JJ McCarthy.

He was educated at home until he was sent to school in England at Saint George's School, Weybridge. He was articled to his father in 1896 for five years. He then spent six months in the office of Thomas Edward Marshall in Harrogate before entering into partnership with his father on 10 April 1902.

In 1919, Ralph Byrne and Thomas George Smith were awarded third prize in the Daily Express competition for designing model homes for clerical workers in connection with the Model Homes exhibition in Central Hall, Westminster. 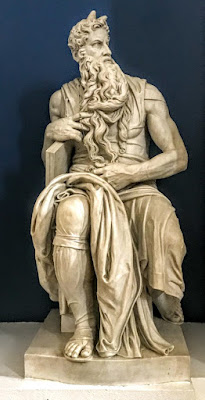 The statue of Moses in Athlone is a copy of Michelangelo’s Moses in the Church of San Pietro in Vincoli in Rome (Photograph: Patrick Comerford, 2018)

Byrne favoured the classical idiom for much of his church designs, moving away from the Gothic Revival-style, which had been in vogue since the early 19th-century for Roman Catholic church building projects.

Byrne died at his house, 9 Ailesbury Road, Ballsbridge, on 15 April 1946 and was buried in Glasnevin cemetery. He had married Mary Josephine Mangan of Dunboyne Castle, Co Meath, in 21 November 1905. She died in 1957. Their only son, Frank William Barrett Mangan Byrne, a captain in the Royal Irish Fusiliers, was born in 1910 and died in Malta on 30 May 1940.

I found the windows in Byrne’s church in Athlone were so attractive this week that I shall discuss them later today. 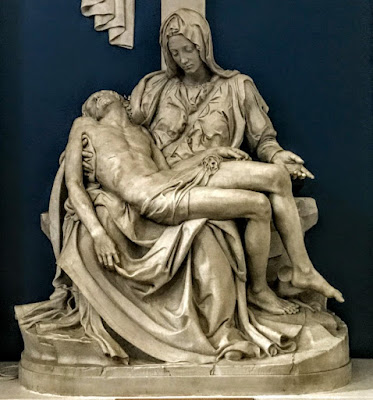 A copy of Michelangelo’s Pieta in Byrne’s church in Athlone (Photograph: Patrick Comerford, 2018)

Thanks for the article. I want to have a holiday in Ireland and Athlone looks like a good area. But I'll have to wait 'til later in the year given current travel restrictions. Greetings from France!


..perfect...and who makes the copies of the PIETA and MOSES in the ATHLONE church?
THANKS FOR YOUR HELP