Visiting a classical basilica in Cavan 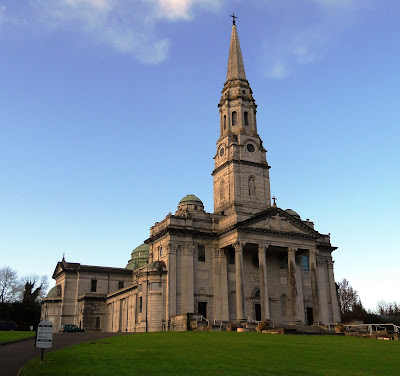 The Cathedral of Saint Patrick and Saint Felim stands on a hill at the end of Farnham Street in Cavan (Photograph: Patrick Comerford, 2011)

During my weekend in Cavan, I visited the Roman Catholic Cathedral of Saint Patrick and Saint Felim. This is the tallest and most prominent building in Cavan Town and stands at the end of Farnham Street, across the street from the older Church of Ireland parish church, which was completed in 1815.

Cavan Cathedral is a relatively modern cathedral, designed by the architect Ralph Henry Byrne (1877-1946) and built in neo-classical style between 1938 and 1947. However, the story of Cavan Cathedral dates back to the mid-18th century, when a small thatched chapel, without seating, was built in the town, on a site donated by the Maxwell family of Farnham Estate.

The small chapel continued in use until 1823, when it was replaced by a new church built on the same site in Farnham Street. The lease for the site of the new church was confirmed by John James Maxwell (1760-1823), 2nd Earl of Farnham. He died that year and is buried in the neighbouring Church of Ireland parish church.

The church was renovated in 1862 and Bishop Browne raised it to the status of a cathedral, dedicated to Saint Patrick. It was said at the time that it had some of the finest church furniture, with pews reserved for some of Cavan’s more important citizens.

Then, in 1919 a decision was made to build a larger cathedral on the site behind the old cathedral, and building work began in 1938. The cornerstone, which was part of an old Mass Rock, was laid on 10 September 1939.

However, building work was interrupted by World War II, and although the cathedral was completed in 1942 it was not consecrated until 1947.

For a short time, the old Gothic cathedral and the new Classical cathedral stood side-by-side. Then old Saint Patrick’s Cathedral was taken down, stone-by-stone, and was rebuilt, without its transepts, in Ballyhaise. There it stood for only a short time, and was demolished around 1952, when its stones were used to build a new church in Castletara. 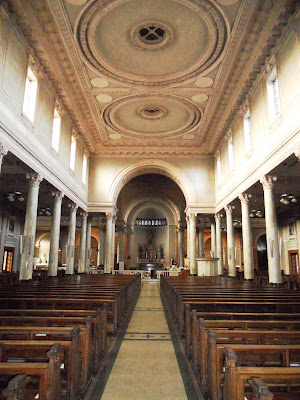 Cavan Cathedral was designed in the style of a Roman basilica by Ralph Byrne (Photograph: Patrick Comerford, 2011)

The new cathedral was designed by Byrne along the lines of a Roman basilica with a Corinthian portico. His choice of the classical style was a deliberate rejection of the Gothic style popularised in Ireland by AWN Pugin and JJ McCarthy in the previous century, and a return to a style that had long been forgotten. No Roman Catholic cathedral had been built in the classical style since Saint Mel’s Cathedral was built in Longford in 1840.

The architect in Longford, Joseph B. Kearne, was inspired by the Madeleine Church in Paris, and the Pantheon and Saint John Lateran in Rome when he was designing his cathedral. Apart from George Goldie’s Romanesque Revival cathedral in Sligo (1869-1874), and JJ McCarthy’s own hybrid Lombardo-Romanesque cathedral (with a hint of inspiration from Pisa) in Thurles (1865-1879), cathedral building in Ireland in the second half of the 19th century demonstrated a universal acceptance of the Gothic style revived by Pugin and McCarthy.

Cavan Cathedral is oriented West-East rather than East-West. It is built of Wicklow granite and some limestone, with Portland stone details. The West Front (at ern endthe east) was inspired by Francis Johnston’s design for Saint George’s Church (Church of Ireland) in Hardwicke Street, Dublin, built over a century earlier between 1802 and 1813.

The portico has four Corinthian columns, with richly carved capitals, supporting the tympanum, with sculptures by George Smith of Christ flanked on either side Saint Patrick and Saint Felim. The spire stands 224 ft above Farnham Street and is topped with a gilded cross. 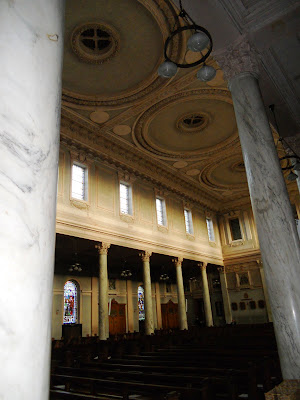 he nave is divided from the side aisles by marble columns with Corinthian capitals, marble bases and marble plinths (Photograph: Patrick Comerford, 2011)

The cathedral is cruciform in shape, designed like a Roman basilica, with a narthex, aisled nave, clerestory and apse. The nave is seven bays long and divided from the side aisles by columns of grey and white Paronasetto marble from Santa Pietra, with Corinthian capitals, marble bases and marble plinths, all in different colours. The dome over the crossing is supported by four marble columns. 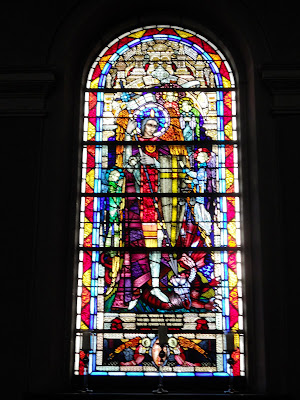 Saint Michael the Archangel ... one of the six windows by the Harry Clarke studios in Cavan Cathedral (Photograph: Patrick Comerford, 2011)

The cathedral also has six stained-glass windows in the nave and one in the south transept that come from the studios of Harry Clarke (1889-1931 and that were added in 1994.

On that bright sunny afternoon, the cathedral stood out clearly against the blue sky, and there was a steady stream of visitors coming in to pray there.
Posted by Patrick Comerford at 06:30