A day at the concentration
camp in Sachsenhausen 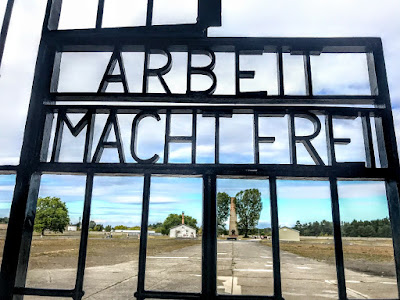 During these few days in Berlin, I am staying in an apartment on Tucholskystraße in Berlin, around the corner from Oranienburger Straße and the Neue Synagoge or New Synagogue.

It seemed more than coincidental that I took the train from here to the town of Oranienburg, north of Berlin, and spent most of the day at Sachsenhausen, or Sachsenhausen-Oranienburg, the Nazi concentration camp that was used primarily for political prisoners from 1936 to 1945.

Oranienburg was the first detention centre and concentration camp established by the Nazis when they gained power in 1933. It held the political opponents of German Nazism from the Berlin region, mostly members of the Communist Party of Germany and social-democrats, as well as a number of homosexual men and scores of the so-called ‘undesirables.’

The camp was in the centre of Oranienburg on the main road to Berlin, and was set up with the Brown Shirts took over a disused factory. The first prisoners, held in ‘protective custody,’ were marched through the town to perform forced labour on behalf of the local council.

On the front gates into Sachsenhausen is the infamous slogan Arbeit Macht Frei (‘Work Makes (you) Free’). About 200,000 people passed through Sachsenhausen, planned to set the standard for other concentration camps, both in its design and in the treatment of prisoners. 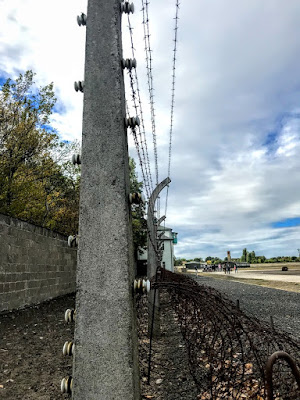 The main gate or Guard Tower ‘A’ houses the camp offices and was mounted with an 8 mm Maxim machine gun that had the entire, triangular-shaped, 1,000-acre camp site in its range.

In the large, central Appellplatz, tens of thousands of prisoners lined up each morning and evening for the roll call. Barrack huts lie beyond the roll call area, radiating from the gate, and additional watchtowers were built along the perimeter.

The camp was extended in 1938 with the addition of the ‘small camp’ north-east of the entrance gate. From 1941, prisoners were kept in isolation in Sonderlager, an area outside the main camp. 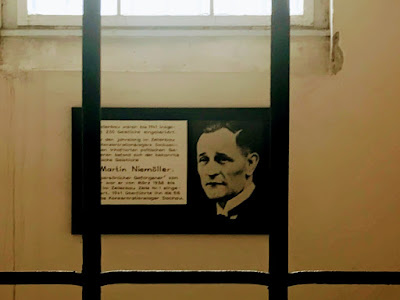 The prisoners held in isolation in Sachsenhausen included the Lutheran pastor and theologian, Martin Niemöller (1892-1984). He is known for his widely quoted statement, found in different versions, that begins ‘First they came for the Communists, and I did not speak out –because I was not a Communist,’ and that concludes, ‘Then they came for me – and there was no one left to speak for me.’

Other prisoners held here included Bonhoeffer’s brother-in-law Hans von Dohnányi (1902-1945), who is now remembered in the name of the street leading from the centre of Oranienburg into Sachsenhausen. 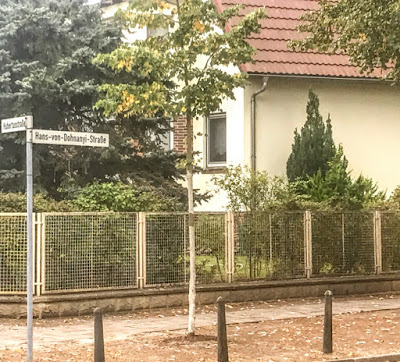 Few people ever escaped alive from Sachsenhausen. The 3-metre-high stone wall, topped by a lethal electric fence, was patrolled by guards and dogs and was bounded by a gravel ‘death strip.’

Prisoners were forced to work in SS workshops in an industrial area outside the camp perimeter. Heinkel, the aircraft manufacturer, was a major exploiter of Sachsenhausen labour, with 6,000 to 8,000 prisoners working on their He 177 bomber. Other firms involved included AEG and Siemens, and a brick factory.

In some cases, prisoners of war were made to run up to 40 km a day with heavy packs, sometimes with performance-boosting drugs including cocaine, to trial military boots in tests commissioned by shoe factories.

Wolfgang Wirth carried out experiments in the camp with a lethal poison gas, Sulfur mustard.

Near the end of World War II, 13,000 Soviet POWs were brought to Sachsenhausen. Over 10,000 were executed by being shot in the back of the neck and their bodies were incinerated in a crematorium.

As the Red Army advanced in the spring of 1945, the Nazis prepared to evacuate Sachsenhausen. On 20-21 April, the SS ordered 33,000 prisoners to begin a forced march. Most of the prisoners were physically exhausted and thousands did not survive the death march, and those who collapsed on the way were shot by the SS.

The march ended near Raben Steinfeld on 2 May, when 18,000 remaining prisoners were liberated by Belorussian troops. The camp’s remaining 3,000 prisoners, including 1,400 women, were liberated on 22 April 1945 by Soviet and Polish troops.

In August 1945 the Soviet Special Camp No 7 was moved to the area of the former concentration camp. Nazi functionaries were held in the camp, along with political prisoners and inmates sentenced by Soviet Military Tribunals. By 1948, Sachsenhausen had been renamed Special Camp No 1, and was the largest of three special camps in the Soviet Zone.

One of the camp officers was Roman Rudenko, the Soviet chief prosecutor at the Nuremberg Trials. The camp closed in 1950.

Planning began in 1956 to make Sachsenhausen a national memorial, and this was inaugurated on 23 April 1961.

The site at Sachsenhausen is now a museum and a memorial. Several buildings survive or have been rebuilt, including guard towers, the camp entrance, the crematorium ovens and the camp barracks.

The museum includes artwork by former prisoners and a 30 cm high pile of gold extracted by the SS from the prisoners’ teeth.

During excavations in 1990, the bodies of 12,500 people were found at Sachsenhausen, including children, adolescents and elderly people.

The site has been vandalised by neo-Nazis on several occasions. In September 1992, barracks 38 and 39 of the Jewish Museum were severely damaged in an arson attack. The perpetrators were arrested, and the barracks were rebuilt by 1997.

Of course, there are all too many lessons for today. The far-right is on the rise again, not just in German, racism is being expressed openly on the streets of European cities, and Hitler’s rise to power came on the backs of a promise to ‘Make Germany Great Again,’ and this was helped by his attacks on a free press.

But perhaps I should wait for another day to write about this. 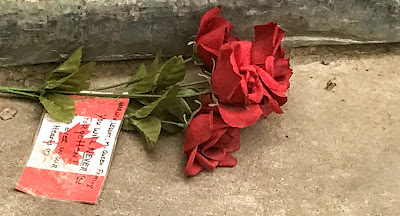 Roses at the memorial in memory of the victims of Sachsenhausen (Photograph: Patrick Comerford, 2018)