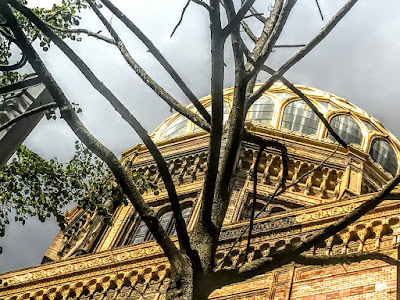 The Dome of the New Synagogue on Oranienburger Straße, the main synagogue of the Jewish community in Berlin (Photograph: Patrick Comerford, 2018)

The apartment I am staying in an apartment on Tucholskystraße is just around the corner from the Neue Synagoge or ‘New Synagogue’ on Oranienburger Straße, the main synagogue of the Jewish community in Berlin.

After a day-long visit to concentration camp at Sachsenhausen in Oranienburg yesterday [12 September 2018], I spent a few hours in New Synagogue. With its domes, exotic and eastern Moorish style, and its resemblance to the Alhambra, it is an important work of architecture from the mid-19th century in Berlin.

Jews have been living in Berlin since the end of the 13th century. They were expelled in 1573, but they returned to the city over the next 100 years, and in 1671 the Elector Friedrich Wilhelm granted two Jewish refugees from Austria and their families the right to settle in Berlin.

The Jewish population in Berlin continued to grow in the 17th and 18th centuries, despite efforts by the Kings of Prussia to limit their number, and Jews in Berlin were prominent in various aspects of the city’s economic, intellectual and cultural life.

Berlin became the first centre of Haskalah, the Jewish cultural enlightenment movement, and its most renowned exponent, Moses Mendlessohn, lived in this city. The Judische Freischule, established in Berlin in 1778, was the first Jewish institution of learning that taught the German language, and the curriculum included general subjects.

In the 19th and early 20th century, the Jewish population of Berlin increased greatly – from 3,300 in 1812, to 28,000 in 1866, to 142,000 in 1910. The rapid rise was the result of a mass influx of Jews from provincial towns and from the eastern provinces of Imperial Germany, especially from Posen (today Poznan, Poland) and from Eastern Europe.

A high percentage of Berlin’s Jewish population, therefore, was made up of Ostjuden or Jews from the East, and this situation had considerable impact on both the Jewish and the non-Jewish population of Berlin.

The New Synagogue on Oranienburger Straße was built in 1859-1866 as the main synagogue of the Berlin’s Jewish community. It was designed by the architect Eduard Knoblauch (1801-1865) in a splendid eastern Moorish style, inspired by the Alhambra,. When Knoblauch died in 1865, the project was taken over by Friedrich August Stüler, who took responsibility for completing the building and for its interior arrangement, design and decoration.

The synagogue opened in 1866 in the presence of Count Otto von Bismarck, then the Minister President of Prussia. 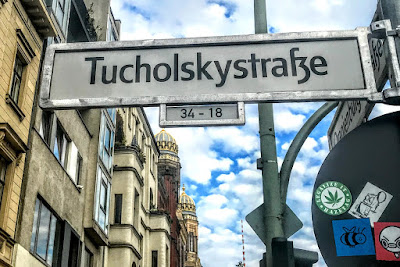 Tucholskystraße is on the corner of Oranienburger Straßefrom, close to the Neue Synagoge or ‘New Synagogue’ (Photograph: Patrick Comerford, 2018)

The front of the building, facing Oranienburger Straße, is richly ornamented with shaped bricks and terracotta, accented by coloured glazed bricks. Beyond the entrance, the building’s alignment changes to merge with pre-existing structures.

The synagogue’s main dome with its gilded ribs is an eye-catching sight. The central dome is flanked by two smaller pavilion-like domes on the two side-wings. Beyond the façade was the front hall and the main hall with 3,000 seats. Due to the unfavourable alignment of the property, the building’s design required adjustment along a slightly turned axis.

The Neue Synagoge is also an early example of the use of iron in construction. Iron was a new building material and the iron used in building was visible in the outside columns, as well and in the construction of the dome. Iron was also a core component for the now-lost floor structure of the main hall.

The New Synagogue was the largest synagogue in Germany at the time, seating 3,000 people. The building housed public concerts, including a violin concert with Albert Einstein in 1930. With an organ and a choir, the religious services reflected the liberal developments in the Jewish worship at the time. 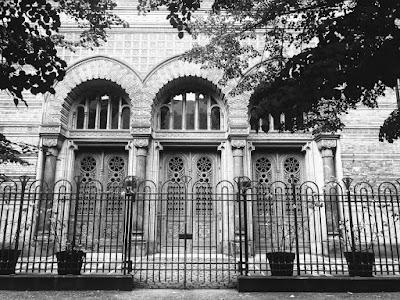 The New Synagogue was one of the few synagogues in Germany to survive Kristallnacht in 1938 (Photograph: Patrick Comerford, 2018)

This was one of the few synagogues in Germany to survive Kristallnacht or the November Pogrom 80 years ago on the night of 8 and 9 November 1938, when Nazi mobs broke into the Neue Synagoge, desecrated Torah scrolls, smashed furniture and furnishings, piled them up and set them on fire.

Wilhelm Krützfeld, head of the local police precinct, was on duty that night. He ordered the Nazi mob to disperse. He told them the building was a protected historical landmark and drew his pistol, warning he would use it to uphold the law for its protection. This gave time for the fire brigade to arrive and put out the fire before it spread to the main building, and the synagogue was saved from destruction.

The New Synagogue remained standing, and was repaired by the congregation, which continued to use it as synagogue until 1940. Besides being used for prayers, the main hall was also used for concerts and lectures since other venues were blocked for Jews.

The main prayer hall was last used by the congregation on Sunday 31 March 1940, this time for the final concert in a series of benefit concerts for the Jüdisches Winterhilfswerk or Jewish Winter Aid Fund, helping poor Jews who were denied government benefits.

On 5 April 1940, the Jüdisches Nachrichtenblatt was forced to announce that services in the New Synagogue had been cancelled until further notice. Members of the congregation were told to remove their belongings from their shelves in the prayer hall by Monday 8 April 1940.

The uniform department of the German army seized the building and used the main hall for the storage of army uniforms.

I was surprised to learn yesterday that the Jewish Community continued to use the office rooms in the front section of New Synagogue, including the Repräsentantensaal or hall of the assembly of elected community representatives below the golden dome. Some members of the congregation even held occasional prayers in this hall until September 1942, when they were forced to abandon the front section too.

The building to the left from the New Synagogue and the second one to the right at Oranienburger Straße 28 survived World War II intact, and the Jewish community returned to the building in 1946. 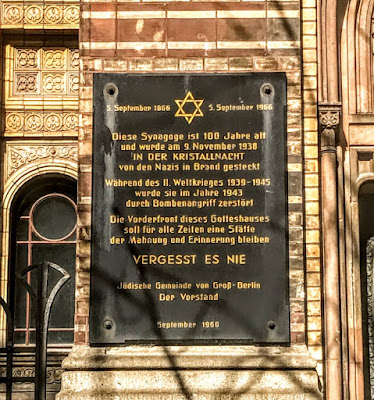 The rebuilding of the front section began after the fall of the Berlin Wall in 1989 (Photograph: Patrick Comerford, 2018)

In 1958, the Jewish Community of East Berlin decided to demolish the ruined rear sections of the building, including the soot-blackened ruin of the main prayer hall, leaving only the less-destroyed front section.

The damaged, but mostly preserved, central dome on top of the front section was also torn down in the 1950s. At the time, East Berlin’s Jewish Community, impoverished and diminished after the Holocaust, could not foresee any future opportunities to restore the New Synagogue.

But with the fall of the Berlin Wall in 1989, rebuilding of the front section began. From 1988 to 1993, the structurally intact parts of the building close to the street, including the façade, the dome and some rooms behind, were restored as the Centrum Judaicum or Jewish Centre. 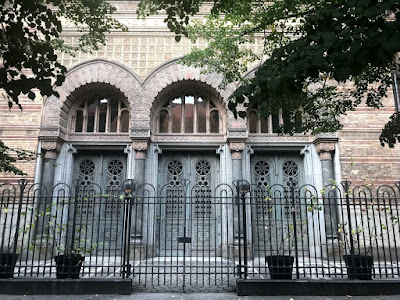 Once again, the façade of the New Synagogue displays in gold Hebrew lettering the inscription ‘Open the gates to let a righteous nation in, a nations that keeps faith’ (Photograph: Patrick Comerford, 2018)

The crown of the main dome was put in place on 5 June 1991. Since 5 September 1991, the restored gate of the New Synagogue – once the largest and most beautiful synagogue in Berlin – displays in gold Hebrew lettering the inscription it bore when it was first dedicated: ‘Open the gates to let a righteous nation in, a nations that keeps faith’ (Isaiah 26: 2).

By 1994, the Grand Staircase had been restored; and the new foundation stone was unveiled on 9 November 1998, 50 years after Kristallnacht.

Although the main sanctuary was not restored, a small synagogue congregation was re-established in May 1995, using the former women’s wardrobe room.

I also climbed to the top of the dome yesterday afternoon. The present building on the site is a reconstruction of the ruined street frontage with its entrance, dome and towers, with only a few rooms that have survived behind it. It is truncated before the point where the main hall of the synagogue began.

The congregation is the Berlin community’s only Masorti synagogue. Most of the building, however, houses offices and a museum.

Gesa Ederberg became the first female pulpit rabbi in Berlin in 2007 when she became the rabbi of the New Synagogue. Jewish services are now held again in the New Synagogue. As the first woman rabbi to serve in Berlin since the Holocaust, she has helped her reinvigorate the German community that once represented the cutting edge of liberal Judaism.

Born a Lutheran, she first visited Israel at the age of 13 and slowly fell in love with Judaism. She studied religion in Germany and Israel before converting to Judaism at the Jewish Theological Seminary in New York in 1995. After returning to Berlin, she entered the rabbinical school at the Schechter Institute of Jewish Studies in Jerusalem, and she was ordained in 2003.

She was a founding member of the General Rabbinic Conference of the Central Council of Jews in Germany, and in 2006 she helped found the European Rabbinical Assembly of Masorti/Conservative Rabbis. She returned to the Oranienburger Strasse Synagogue as the new rabbi in 2007. 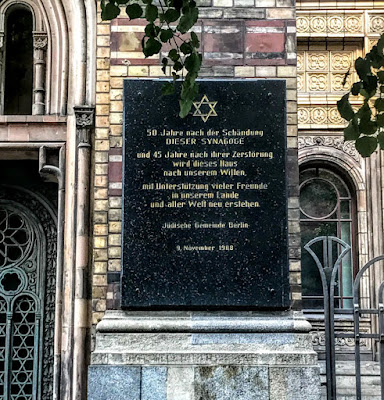 The new cornerstone of the New Synagogue was laid symbolically on 9 November 1998, 50 years after Kristallnacht (Photograph: Patrick Comerford, 2018)