Finding my way through Baker Street,
one of the oldest underground stations 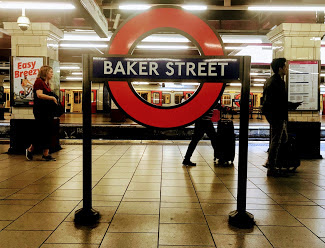 I was through Baker station twice yesterday [19 September 2018] on my way to a meeting of the trustees of the Anglican mission agency USPG (United Society Partners in the Gospel) at Methodist Church House, on Marylebone Road in the City of Westminster.

Baker Street is named after the builder William Baker, who laid out the street in the 18th century. The street is famous both for Gerry Rafferty’s hit single ‘Baker Street,’ recorded 40 years ago in 1978, and because Sir Arthur Conan Doyle would have us believe Sherlock Holmes and Dr John Watson once lived at 221B Baker Street.

The area was originally a comfortable, middle-class residential area, but today Baker Street is a busy street mainly occupied by commercial premises.

Baker Street station has entrances on Baker Street, Marylebone Road and Chiltern Street. The nearby attractions include Regent’s Park, Lord’s Cricket Ground, the Sherlock Holmes Museum and Madame Tussauds, and the Marylebone campus of Westminster University is across the road from the station.

Over the years, Baker Street station has had several booking offices and seen major changes over the past century and a half. The present station is a merging of three original, separate stations:

1, The Circle Line station: Located west to east beneath Marylebone Road, roughly between Upper Baker Street and Allsop Place, this station was a part of the original Metropolitan Railway line from Bishop’s Road to Farringdon Street, opening with it on 10 January 1863.

3, The deep-level tube station of the Baker Street and Waterloo Railway: this is at a lower level beneath the site of Baker Street East, and opened on 10 March 1906. 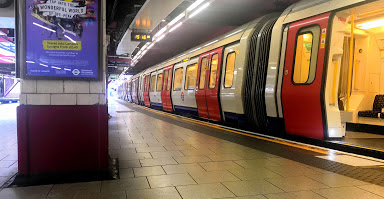 The colours of the underground at Baker Street Station (Photograph: Patrick Comerford, 2018)

With 10 platforms in all, Baker Street has the most London Underground platforms of any station on the network. All this means the station layout is complex and can be difficult to use for people like me who are colour blind and find it difficult to manoeuvre through the colour coding for the different lines that pass through Baker Street. But the staff were helpful yesterday as I found my way between Baker Street and Liverpool Street on my way to and from Stansted Airport.

The Bakerloo line has its origins in the failed projects of the pneumatic 1865 Waterloo and Whitehall Railway and the 1882 Charing Cross and Waterloo Electric Railway.

Originally a project of the Baker Street & Waterloo Railway, the line was built by the Underground Electric Railways Company of London (UERL) and opened between Baker Street and Lambeth North, then called Kennington Road) on 10 March 1906.

The line was extended to Elephant and Castle five months later, on 5 August. The contraction of the name to Bakerloo rapidly caught on, and the official name was changed to match in July 1906.

When work on the line started in June 1898, it had been financed by the mining entrepreneur and company promoter Whitaker Wright, who fell foul of the law over the financial proceedings involved and dramatically completed suicide at the Royal Courts of Justice, after being convicted in 1904. As a result, work on the line was stopped for a few months and did not resume until Charles Yerkes and UERL stepped in and took over the project. 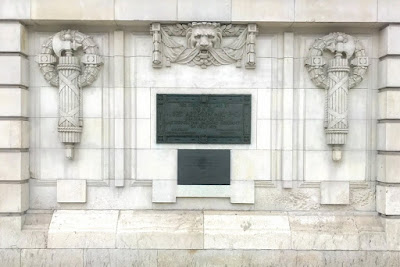 By 1913, the Metropolitan line had been extended from its original northern terminus at Baker Street to the west with interchange stations with the Great Central Railway at Marylebone and the Great Western Railway at Paddington, and a new station at Edgware Road.

By the mid-1930s, the Metropolitan line was suffering from congestion caused by the limited capacity of its tracks between Baker Street and Finchley Road. To relieve this pressure, the network-wide New Works Programme (1935-1940) included building new sections of tunnel between the Bakerloo line’s platforms at Baker Street and Finchley Road and replacing three Metropolitan line stations – Lord’s, Marlborough Road and Swiss Cottage – between those points with two new Bakerloo stations at St John’s Wood and Swiss Cottage.

Restoration work in the 1980s on the oldest portions of Baker Street station brought it back to something similar to its 1863 appearance, so that today Baker Street brings together modern travel and Victorian vision. 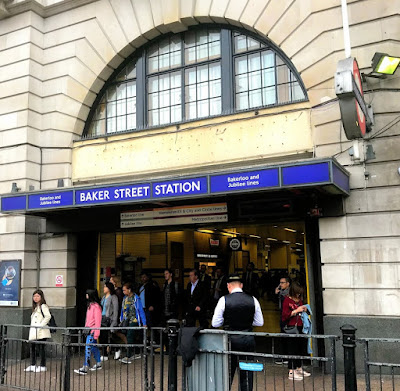