Jesus said to them, ‘You do not know what you are asking. Are you able to drink the cup that I drink, or be baptized with the baptism that I am baptised with?’ (Mark 10: 38) … an icon of Christ in an antique shop in Thessaloniki (Photograph: Patrick Comerford)

We all come to God with our own bundle of questions, our own requests, our own expectations. And the answers sometimes take us aback not only in content but also in form and experience.

Job has had deep and searching questions. But when the response comes Job’s experience is very unlike that of Elijah who finds the Lord is not in the wind, in the earthquake, or in the fire, but in the ‘still small voice’ (I Kings 19: 11-13).

Job answers God out of the whirlwind, and he puts very real questions to God. Where Job hears the voice of God has many resonances with the presence of God found in the Psalm.

Do we understand the place of suffering and challenge in being Christians, in being disciples? Certainly, James and John show little understanding about what lies before them as disciples as they come to Christ with their own questions and expectations. But once again, we find how God answers our questions in ways that we might never expect.

Earlier in Saint Mark’s Gospel (Mark 9: 33-34), the disciples argued about which of them is the greatest. Now two members of the inner circle ask a favour of Jesus: they seek positions of special dignity at the heavenly banquet at the end of time (verse 37).

Now in this morning’s Gospel reading (Mark 10: 35-45), unlike some other Gospel accounts, Saint Mark dismisses the idea that these ‘Sons of Thunder’ needed their mother’s help to ask for a special place for them. According to Saint Mark, these two go straight to Jesus themselves. They have a special request, a special demand, a special favour to ask for.

They want one to sit at his right hand, and the other at his left hand.

In my own way, I can identify with James and John, the sons of Zebedee. Whenever I read this Gospel story, I think back to my childhood days. I remember all those preparations for football matches, or beach cricket, as we lined up to pick sides. And how we all wanted to be among the first to be picked for a team.

I can still see us: 9- or 10-year-old boys, jumping up and down on the grass, waving our hands or pointing at our chests, and pleading: ‘Me, me, please pick me, I’m your friend.’

And then, when we were picked, oh how we wanted the glory. Slow at passing the ball, in case I might not score the goal. Better to lose that ball in a tackle than to pass it to someone else and risk that someone else scoring the opening goal or, worse still, the winning goal.

And that is who James and John remind me of: wanting to be picked first, wanting to be the first to line up beside the team captain, being glory seekers rather than team players.

And their upset actually turns to anger.

Did James and John think that opting to follow Jesus, becoming disciples, was a good career move?

And what did James and John want, really, really want?

They wanted that one would sit on Christ’s right hand and the other on his left.

Now, even that might not have been too bad an ambition. The man who stood at the right hand of the Emperor in the Byzantine court was the Emperor’s voice. What he said was the emperor’s word. And so, in the creed, when we declare our belief that Christ sits at the right hand of the Father, we mean not that there is some heavenly couch on which all three are seated, comfy and cosy, as if waiting to watch their favourite television sit-com.

When we say that Christ ‘is seated at the right hand of the Father,’ we mean that Christ is the Word of God. In some way, I suppose, this is what Andrei Rublev was trying to convey in his icon of the Visitation of Abraham, his icon of the Holy Trinity in the Old Testament.

In that icon, the Father and the Holy Spirit are seated to the right and left of the Son. Indeed, in that icon, Christ is wearing not the elaborate high-priestly stole of a bishop, but the simple stole of a deacon at the table.

For James and John to want to be seated at the right and left of Christ in his glory – not when they were sitting down to a snack, or travelling on the bus or the train, or even at the Last Supper, but in his glory (see verse 37) – they were expressing an ambition to take the place of, to replace God.

But to be like God means to take on Christ’s humility, as we are reminded in this morning’s reading from the Letter to the Hebrews (Hebrews 5: 1-10).

Wanting to be first, wanting to be noticed by those who have power and privilege, is not a model for discipleship or for ministry.

The word liturgy (λειτουργία, leitourgía) means the work for and of the people. But in its truest sense this is not the work of nice people, good people, people like us, but in its crudest use in Greek the work of the many, the service of riff-raff, even the beggars.

I was reminded in Crete a few years ago that The Beggars’ Opera translates into Greek as Η λαϊκή όπερα (laikí ópera), the work of the laity. The true laity are the needy with outstretched arms.

The liturgy of the Church only becomes a true service when we also serve the oppressed, when we become God’s ears that hear the cry of the poor, and act on that, when through the Church Christ hears that cry of the bruised and broken.

And the Eucharist, the Liturgy, become true sacrament when it becomes, when we make it, a taste, a sign, a token of the promise of, a thirsting for the Kingdom of God.

To do this great task, as the ambitious pair in this Gospel reading, James and John, are reminded, we must first be deacons, servants, waiters at the table to meet the needs of the needy outside the doors of the church, in the streets and the laneways.

All of us in the Church as disciples are called first and foremost to serve. And when we serve the people, when in obedience we meet them in their suffering, then we can hear their cries and their prayers and truly serve them in the services of the Church and in the Divine Liturgy (see Hebrews 5: 1-10).

Christ asks us that in this Gospel reading. Are we willing to drink the cup that he drinks, or to be baptised with his baptism (see verses 38 and 40)?

Saint James – not Saint James the Brother of the Lord, whom we remember on Tuesday (23 October 2018), but Saint James the Great – was executed by the sword and became one of the first Christian martyrs (see Acts 12: 1-12).

Saint John too lived a life of service to the Church: he was exiled on Patmos, and although he died in old age in Ephesus, there were numerous attempts to make him a martyr. And, of course, he gave his name to in the Johannine writings in the New Testament: the Fourth Gospel, three epistles and the Book of Revelation.

Martyrdom comes in many forms. In essence, the word martyr means witness. But the first step in martyrdom is dying to self, to self-ambition, to self-seeking, to self-serving. Our lives must be lives that are testimony or witness to your most cherished beliefs, testimony to Christ himself. 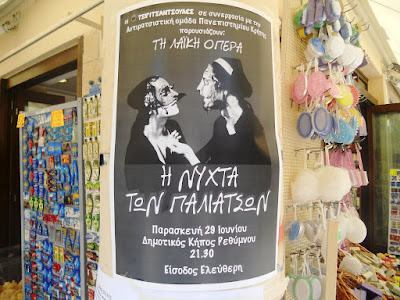 I was reminded in Rethymnon in Crete recently that ‘The Beggars’ Opera’ translates into Greek as Η λαϊκή όπερα, the work of the laity (Photograph: Patrick Comerford) 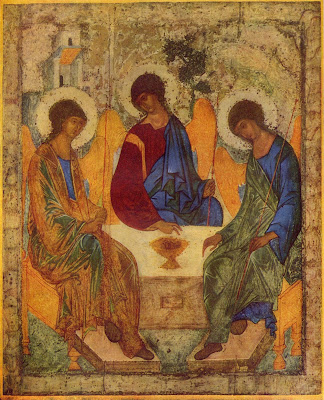 In Andrei Rublev’s icon of the Holy Trinity, the Christ-figure is wearing a simple deacon’s stole, and is seated with the Father and the Holy Spirit to his left and to his right 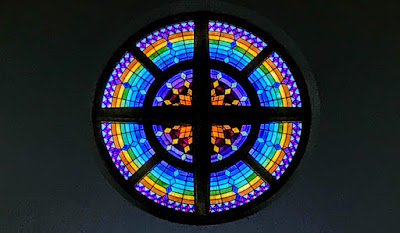 ‘Where were you when I laid the foundation of the earth? … Who determined its measurements – surely you know!’ (Job 38: 4-5) … a window in the parish church in Moyvane, Co Kerry (Photograph: Patrick Comerford, 2018)

Sincere thanks for the in depth history on your blog whilst researching Newland House on Taylors Lane, Rathfarnham as part of a business plan with a view to purchase, restore and re-purpose such a beautiful house.
I've been involved in the total restoration of one Grade II Listed building in London, my own personal input being in the area of carpentry and joinery and have worked on many more Grade I and II Listed buildings in the London area including Fulham Palace, the former home to the Bishops of London. Apologies for using this comment box for contact as I was unable to find a contact email address. Thanks again.