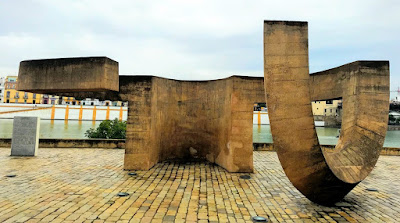 The ‘Monument to Tolerance’ by Eduardo Chillida on the banks of the River Guadalquivir in Seville (Photograph: Patrick Comerford, 2018)

On Friday afternoon, I took a stroll along the banks of the River Guadalquivir in Seville, from the Torre del Oro and the Puerta de Jerez to the Puente de Isabel II, the bridge that crosses the Guadalquivir river and links the heart of Seville with the barrio of Triana on the other side of the river.

Many of the boat trips along the river begin beneath the Torre del Oro, a crenelated tower built by the Moors in the 13th century to protect the port and now housing a small maritime museum.

The long, tree-lined promenade between the Paseo de Cristóbal Colón and the east bank of the river is also an ideal place to relax, watching scullers and rowers practice their strokes earnestly. 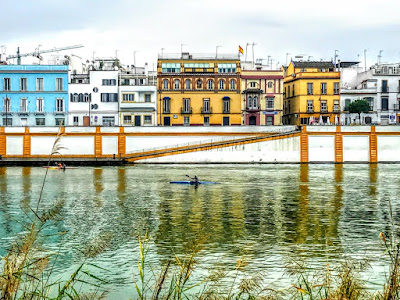 Rowing on the River Guadalquivir in Seville (Photograph: Patrick Comerford, 2018)

Two sculptures on this side of the river, close to the Triana Bridge, are moving reminders of tolerance and intolerance in Seville and of a friar from Seville who is regarded as a father-figure in the development of international human rights.

The Guadalquivir River was used by the Phoenicians, the Romans, who built Hispalis on the site of present-day Seville in the 2nd century BC, and the Moors during their rule between 712 and 1248. And, of course, the ‘Catholic monarchs,’ Isabella and Ferdinand, brought all that gold and silver from the New World up this same river.

But Ferdinand and Isabel also signed the Decree of Alhambra expelling the Jews from Spain in 1492. It seems appropriate, then, that Eduardo Chillida’s ‘Monument to Tolerance’ and the sculpture by Emilio García Ortiz of Fray Bartolome de las Casas, a Dominican friar and bishop and early human rights activist who campaigned against mistreatment of slaves, should stand on the east side of the Puente de Isabel II or Puente de Triana.

The ‘Monument to Tolerance’ was installed as a piece of public art in 1992 as part of the Seville Expo ’92 and was inaugurated by President Chaim Herzog of Israel to mark the 500th anniversary of the expulsion of the Jews from Spain in 1492.

The sculptor Eduardo Chillida (1924-2002), a celebrated Basque artist, is known for his large-scale sculptures in museums, parks and public squares across the world. He was born in San Sebastián and spent much time in both Madrid and Paris. Many of his works are dedicated to public figures or commemorative events, and tolerance is a theme running through many of his work.

This sculpture on the banks of the Guadalquivir celebrates the tolerance once shared in Seville by the three great monotheistic faiths, Jews, Christians and Muslims, but that was destroyed by the Inquisition in 1492.

Is it a stylised menorah, broken by the antisemitism of the Inquisition, when the light of Judaism was quenched in Spain?

Or is this someone generously offering an understanding embrace or a lonely figure seeking the solace and comfort of a hug? 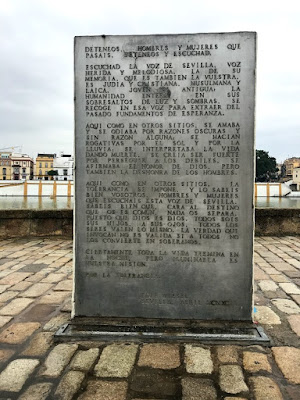 Poetic words by Elie Wiesel by the ‘Monument to Tolerance’ by Eduardo Chillida in Seville (Photograph: Patrick Comerford, 2018)

This great abstract figure is accompanied by two stone walls, one with poetic words by the Nobel Peace Prize laureate and Holocaust survivor Elie Wiesel (1928-2016), written for the inauguration of this sculpture:

As I read it, I tried to translate it:

Stop all who pass by, men and women. Stop and listen.

Listen to the voice of Seville, a voice that is wounded and melodious.

This memorial, which is also yours, is Jewish and Christian, Muslim and secular, young and old. Humanity is created in both light and darkness, it develops in that voice that reaches down to the foundations of hope, deep in the past.

Here as in other places, they loved and they hated themselves for dark reasons and for no reason at all. They prayed in the sun and the rain. Life was understood in death, and believed it had found strength in persecuting the weak. It affirmed the honour of God, yet at one and the same time brought dishonour to humanity.

Here as elsewhere, tolerance prevails, and you know it well, men and mothers, who heed this voice of Seville. You know well that, faced with your shared fate, nothing separates us from each other.

Since God is God, you are all his children.

In his eyes, all of us are of equal value. The truth they invoke has no valid unless it makes sovereign beings of all.

Certainly, all life ends in the night, but to bring light to it is our mission.

Appropriately, across the river in Triana, the ruined Castillo de San Jorge was once a seat of the tribunal of the Inquisition in Seville. The ‘Monument to Tolerance’ invites reflections on this dark period in European history. 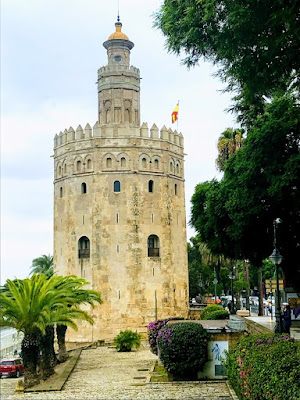 The Torres del Oro by the banks of the River Guadalquivir in Seville (Photograph: Patrick Comerford, 2018)

Seville is one of the most beautiful places in Spain!!!