Remembering the victims
of the Holocaust in Dublin 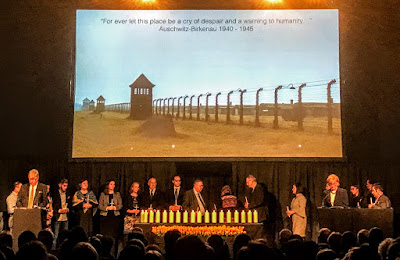 I was a guest at the Holocaust Memorial Day commemorations in the Mansion House in Dublin last night [27 January 2019].

The main guest speaker was President Michael D Higgins, who warned of the rise in anti-Semitism and racism across Europe and spoke of the surge in support for extreme right-wing political parties in many countries. He urged people to work together to ensure hatred does not ‘spread its dark shadow.’

Other speakers in the Round Room in the Mansion House last night included Holocaust survivors Suzi Diamond, Tomi Reichental and Walter Sekules, who live in Ireland, as well as Jadzia Kaminska, who represented her father Jan Kaminski.

The President said: ‘Following World War II, nations around the globe resolved to create political and economic structures and build international institutions that would ensure the horrors wrought by two world wars would never reoccur.’

But he pointed to rise in electoral support in countries across Europe ‘for political parties declaiming an extreme, exclusionary message.’

He added: ‘Refugees, immigrant communities and other minority groups are increasingly viewed as a threat to the rights of the majority, and many achievements by those who have fought tirelessly for human rights are under threat by a new generation of extremists who view those universal rights as a threat to their own individual rights.’

Holocaust Memorial Day commemorates the memory of all who dies in the Holocaust. It recalls six million Jewish men, women and children and millions of others who were persecuted and murdered by the Nazis because of their ethnicity, disability, sexual orientation, political affiliations or religious beliefs.

During my visit to Auschwitz at the end of 2017, I noted that there is no plaque to least two Irish citizens who died in Auschwitz – Ettie Steinberg and her son Leon. Until now, Esther Steinberg was the only Jewish person from Ireland known to have died in the Holocaust.

The historian Conan Kennedy has researched the story of this mother and her child, and more recently her story has become the subject of a new play, Ode to Ettie Steinberg, by Deirdre Kinahan. The story begins in the former Czechoslovakia, where Ettie was one of the seven children of Aaron Hirsh Steinberg and his wife Bertha Roth.

Last night, Dr David Jackson, spoke of his research that shows how Isaac Shishi, Ephraim Saks and his sister Lena Saks, were all born in Ireland, but their families returned to Europe when they were children.

Last night’s programme also paid tribute to Dublin-born Max Levitas, who died last November at the age of 103. His parents were Jewish immigrants to Dublin, fleeing anti-Semitism in the Tsarist Russian Empire. Harry (Hillel) Levitas and Leah were married in 1914 in a synagogue at 52 Lower Camden Street, now the Dublin offices of Concern Worldwide.

The eldest of six siblings, Max Samuel Levitas – Motl Shmuel ben Hillel – was born in June 1915 at 15 Longwood Avenue off the South Circular Road, in the Portobello area of Dublin, then known as ‘Little Jerusalem.’ The family attended Lennox Street synagogue, just around the corner.

Max took part in the Battle of Cable Street in the East End of London in October 1936, while his brother Maurice was a volunteer in the International Brigade in the Spanish Civil War.

Max’s last public speech, at the age of 101, was at commemorations in October 2016 marking the 80th anniversary of the Battle of Cable Street. Until he died, he had been a frequent visitor to his native Dublin, and regularly attended the Holocaust Memorial Day ceremonies. Max had many family members to remember: his aunt Rachel died with most of her family in Riga, his father’s sister Sara died in Akmeyan, and his uncle Elie Leyb Levitetz, was a victim of the war in Paris.

As President Higgins said last night: ‘As anti-Semitism and racism once again begin to rise across Europe, we must remember the Holocaust collectively and work together to ensure that hatred and inhumanity is not allowed to once again spread its dark shadow across Europe and the world.’ 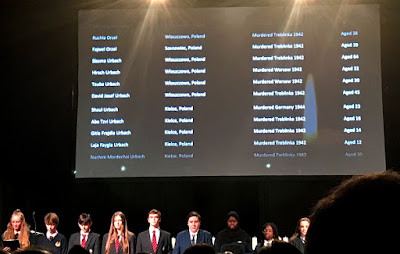 Reading the names of the dead at last night’s Holocaust Memorial Day commemoration in the Mansion House in Dublin (Photograph: Patrick Comerford, 2019)