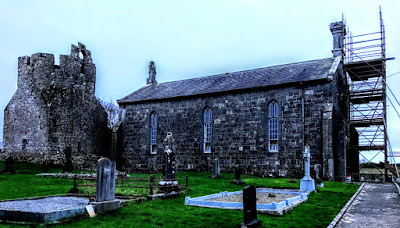 Scaffolding has gone up at the west end of Saint Mary’s Church, Askeaton (Photograph: Patrick Comerford, 2019)

Scaffolding went up the west end of Saint Mary’s Church in Askeaton yesterday as the first stage of process of exploring the work needed to secure the façade so that the building is safe and secure not only for the present, or even for the next few years, but for future generations.

As the scaffolding was going up at the church, a large group of priests, readers and other interested people were in the Rectory, taking part in workshops on Celtic Spirituality.

During the workshops there were a number of comparisons between the practice of turning east to pray, for God is light and Christ is light, and turning our backs on the darkness, symbolised by the west, when once the west walls in churches was decorated symbolically with a doom wall.

Two of the churches in this group of parishes – Saint Mary’s, Askeaton, and Holy Trinity Church, Rathkeale – are oriented east/west. But Castletown Church is oriented north/south rather than east/west, and although Saint Brendan’s Church in Tarbert was originally built on an east/west axis, it was rebuilt in the late 19th century, so that the original church became two transepts, and the newer, main body of the church is on a south/north orientation, with the chancel area at the geographical south end of the church.

We talk about the ‘liturgical east’ of a church, no matter what way the church is built because of topographical constraints or plans dictated by the surrounding buildings.

But where is the liturgical east in a church that is circular or semi-circular? And why do we symbolically turn our backs on darkness, and turn to face the light in our churches?

I was discussing with one priest colleague yesterday that I turn east liturgically, even if this means facing north geographically in one church and south in another, at key points in the liturgy, including the Gloria, the Creed, and preparing the altar at the Offertory.

I normally face the people when I am presiding at the Eucharist, although I have occasionally faced east, and I have never presided at what Anglicans know as a ‘north end’ celebration.

Liturgical east and west refer to the orientation of church buildings. Traditionally the altar is at the east end of a church, and the entrance at the west end.

In the language of church architecture, the east end is where the altar is placed, often within an apse, and usually the façade and the main entrance are said to be at the west end. Even in the churches where the altar end is not actually at the geographical east, terms such as ‘east end,’ ‘west door’ and ‘north aisle’ still make sense liturgically.

The traditional explanation is that during the celebration of the Eucharist, the priest and people faced towards the rising sun, a symbol of Christ, the Resurrection and the Second Coming. However, topography and the layout of building sites often meant that a church could not be built to align with this liturgical orientation. Even then, churches are described as though the end with the main altar faces due east, so that liturgists continue to refer to the ‘liturgical east,’ the ‘liturgical west,’ and so on.

The Latin phrase ad orientem (‘towards the east’) refers to the liturgical rather than geographical position in the Liturgy, with priest and people facing apse or wall behind the altar as they pray. In the contrasting liturgical orientation, versus populum, the priest faces the people.

In a tradition that was well established by the time of Christ, Jews in the diaspora prayed facing Jerusalem, which in most of the Roman Empire would have been to the east.

Some writers suggest early Christians in Jerusalem prayed towards the Mount of Olives, to the east of the city, which they saw as the venue of key eschatological events, especially the Second Coming of Christ.

Tertullian, writing in his Apologeticus ca 197, is the first writer to use the phrase ad orientis regionem (towards the region of the east’) when he refers to this practice. He mentions that because Christians faced towards the east at prayer, some non-Christians accused us of worshipping the sun.

Many early churches were built with the entrance at the west end and the priest and people facing east towards the place of the rising sun. There were exceptions, of course, and the original Constantinian Church of the Holy Sepulchre in Jerusalem had the altar in the west end.

The Apostolic Constitutions (ca 375-380) said churches should have the sanctuary with the apse at the east end, so Christians could pray facing east. In the middle of the sanctuary was the altar, behind which was the bishop’s throne, flanked by the seats of the priests, while the laity were on the opposite side.

During the readings, all looked towards the readers, the bishop and priests looking west and the people looking east. The Apostolic Constitutions do not say on which side of the altar the bishop stood for the Eucharistic liturgy.

The earliest known use of the phrase ad orientem to describe this liturgical position is found in Augustine’s De Sermone Domini in Monte (ca 393).

Clement of Alexandria says: ‘Since the dawn is an image of the day of birth, and from that point the light which has shone forth at first from the darkness increases, there has also dawned on those involved in darkness a day of the knowledge of truth. In correspondence with the manner of the sun’s rising, prayers are made looking towards the sunrise in the east.’

In the ninth century, Saint John of Damascus says facing east in the liturgy is a reminder that God is spiritual light, and that the Bible speaks of Christ as the Sun of Righteousness and Dayspring. 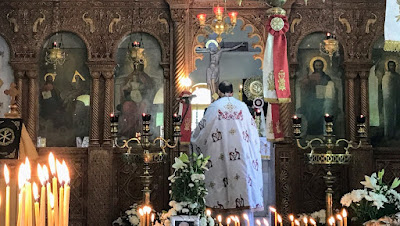 Facing east for the Liturgy in the Orthodox church in Tsesmes, Rethymnon, in Crete (Photograph: Patrick Comerford)

The earliest churches in Rome had a façade at the east and an apse with the altar at the west. The priest celebrating Mass stood behind the altar, facing east and so towards the people, ad populum .

The position in which the priest faced the apse and not the people when celebrating Mass was adopted in the basilicas of Rome in the eighth or ninth century. This usage later became almost universal in the West. However, the Tridentine Roman Missal continued to recognise the possibility of celebrating Mass versus populum or facing the people.

Indeed, in several churches in Rome, it was physically impossible for the priest to celebrate Mass facing away from the people, because of the presence, immediately in front of the altar, of the ‘confession’ (confessio), an area sunk below floor level to allow people to approach to the tomb of the saint buried beneath the altar.

The Anglican liturgist Bishop Colin Buchanan believes that in the first millennium in Western Europe, the president at the Eucharist regularly faced across the altar towards the liturgical west. Some time between the 10th and 12th centuries, a change occurred and the altar was moved to be fixed against the east wall, and the president stood before it, facing east, with his back to the people.

Some churches seem to be oriented to sunrise on the feast day of the patron saint. For example, Saint. Stephen’s Cathedral, Vienna, is oriented in line with sunrise on Saint Stephen’s Day, 26 December, in the Julian calendar in 1137, the year it began to be built.

The importance attached to liturgical orientation declined after the 15th century. But the instructions in the Tridentine Roman Missal (1570) say the celebrant ‘does not turn his back to the altar when about to say Dominus vobiscum (‘The Lord be with you’), Orate, fratres [the introduction to the prayer over the offerings of bread and wine], and Ite, missa est [the dismissal at the conclusion of the Mass], or about to give the blessing.’

In his instructions, Charles Borromeo, Archbishop of Milan (1560-1584), expresses a preference for having the apse point exactly east, in line with the rising sun at the equinoxes, not at the solstices. But when a church is built on a north-south axis, he said the façade should be at the south end. He also accepted that the altar can be at the west end, where ‘in accordance with the rite of the Church it is customary for Mass to be celebrated at the main altar by a priest facing the people.’

At the English Reformation, the rubrics said the Eucharist should be celebrated at a communion table placed lengthwise in the main body of the church, with the priest standing at what was the north side of the altar when it was in the apse, or the narrow side, but was now at the east end, and facing west once the altar had been moved from the chancel into the nave.

Turning to the east continued as the expected practice at certain points in the liturgy, including Gloria Patri, Gloria in Excelsis and the Creed.

During the reign of Charles I, William Laud, Archbishop of Canterbury, encouraged a return to placing the altar at the east end. But in obedience to the rubric in the Book of Common Prayer, priests continued to stand at the north end of the altar in the chancel.

In the mid-19th century, the Oxford Movement saw a return to the east-facing position. The use of the versus populum position was introduced to Anglican usage in the second half of the 20th century.

Cardinal Joseph Ratzinger, later Pope Benedict XVI, linked the east-facing liturgical position with the ‘cosmic sign of the rising sun which symbolises the universality of God.’

Today, it is still common practice for members of the Orthodox Churches to face east when they pray privately in their homes.

John McGahern’s book, That They May Face the Rising Sun, takes its name from one of the characters who ‘sleeps with his head in the west ... so that when he wakes he may face the rising sun.’ He sleeps with an expectation of the resurrection of the dead.

There is something invigorating about sunrise. The light takes over the darkness, the birds begin to sing, and all things seem new. Of course, the sun rises in the east and represents the great hope of the new day. No matter how crushing yesterday may have been, the sunrise indicates a new beginning. Each day we awaken to new possibilities, a new creation, a new opportunity to see brokenness healed. 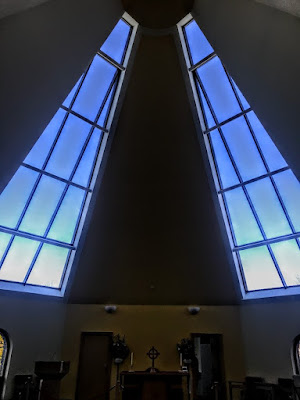 How do we face east liturgically in a circular or semi-circular church? (Photograph: Patrick Comerford)