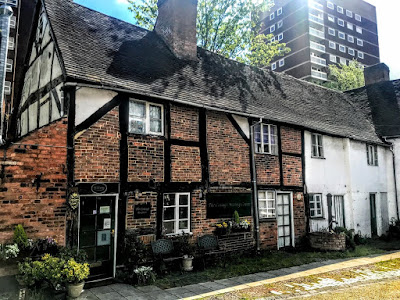 One of the joys of visiting Tamworth is searching out some its architectural heritage and its listed buildings.

Perhaps the Moat House is the best-known of the Listed Buildings on Lichfield Street. I was in Tamworth last week to talk about the history of the Moat House and the Comberford family, and I stayed across the street in the Tamworth Arms, known affectionately to people in the town as the ‘Bottom House,’ because it is at the ‘bottom end’ of the town, at the west end of Lichfield Street.

But Lichfield Street has other interesting houses that survived the development of Tamworth over the past half-century that saw the sad destruction of much of the town’s architectural heritage.

These include the Manor House and the White House, which I have written about in the past. But, as you walk from the Tamworth Arms in towards the town centre, the north side of Lichfield Street is an eclectic mix of architectural styles, so that the large early 19th-century Georgian-style properties at the west end give way towards the east end to much smaller buildings, including the timber-framed Nos 110 and 111, which date from the late 16th or early 17th century.

No 110, the former ‘hall’ range of the structure, has 19th-century rendered re-fronting that hides its earlier Tudor architecture, while the adjoining No 111, with its jettied façade and its exposed timber-framing makes the Tudor House Café a much-photographed building, and it is a reminder of the beauty that was lost in Tamworth with whole-scale demolition and destruction in the 1960s and 1970s. 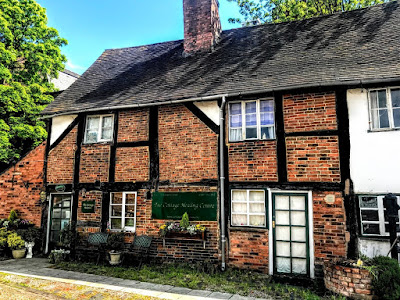 The Cottage Shop and Evelyn Rose Bridal Wear, two shops at Nos 116-17 Lichfield Street, are both housed in a building that dates from the 15th and16th centuries. The house is timber-framed, and No 117 retains a small-paned bow window. But the front of the building is rendered, and you have to go round the back of these two shops to see the timber-framing, which is exposed only in the long rear range that houses the Cottage Healing Centre.

Nos 116 and 117 Lichfield are parts of one, two-storey house that was later subdivided into two, with shops on the ground floor. The original house probably dates from the second half of the 16th century, with alterations made in the 19th and 20th centuries. The front is timber-framed but rendered, and there is a tile roof with brick stacks to the front of the ridge. The first floor was probably jettied originally, though this feature is long lost. 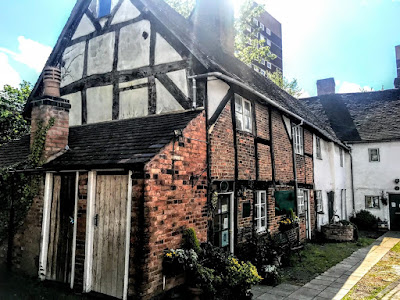 The rear of the building has a gabled wing with square framing (Photograph: Patrick Comerford, 2019)

No 116 has a central segmental-headed entrance with a half-glazed door, and No 117 has a similar entrance at the right end. The ground floor has two segmental-headed windows of two lights with pegged frames and shutter pegs, and similar windows on the first floor with iron opening casements flanking a blind window.

No 117 has a small-paned bow window with a frieze, cornice and canopy extending over the entrance to the right and shutters. The first floor has a three-light, mullioned tramsomed window with a casement to the right of a blind window. There are large stacks in the centre with a smaller, later, stack on the left.

The rear of the building has a gabled wing with square framing, and irregular fenestration with casements and entrances. This rear wing has an early 17th century staircase with serpentine splat balusters, and the top flight has a 16th century fluted timber frieze that has been reused as handrail.

Some accounts say that these buildings at 114-115 Lichfield Street are among Tamworth’s oldest surviving buildings. One account dates them from the 1200s, which would making them older than the Moat House and contemporaneous with many of the earliest parts of Tamworth Castle. But it is more likely that they date from the 15th and16th centuries.

Today, the Cottage Healing Centre is a not-for-profit co-operative of therapists and volunteers, offering alternative therapies.

This collection of buildings is particularly attractive, and they offer a sharp contrast to the tower blocks on Lichfield Street that loom above it. This hidden corner of Tamworth should not be missed by anyone walking along Lichfield Street. 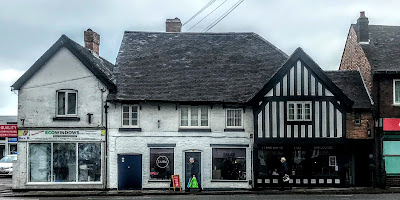 The Tudor House Café at No 110-111 Lichfield Street is much-photographed (Photograph: Patrick Comerford, 2019)