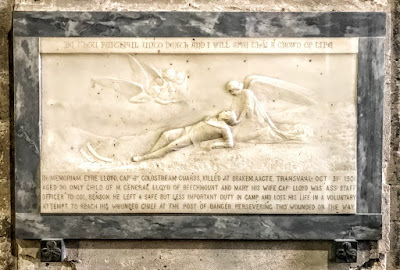 There is a monument at the east end of Holy Trinity Church, Cathedral, high above the pulpit and to the south side of the altar, that is difficult to read – not only because of its height and its obscurity, but because the lettering has faded in the sun over the past century or more, because the figures on the monument have lost their resolution, and because it is obscured by its location beneath a monument to Archdeacon Charles Warburton, a former rector, and its place behind the pulpit.

When I photographed this monument recently, it took some editing before I could read the inscriptions and to figure out the figures in the monumental illustration.

It is a monument that tells a tragic family story, and as I was trying to focus on its inscriptions and its imagery, I came across a similar memorial on a pillar in the south aisle in Saint Mary’s Cathedral, Limerick, during an early morning visit last week [14 May 2019].

Both monuments replicate each other, in their images and inscriptions, down to the very punctuation used in the lettering.

The inscriptions on these monuments in Saint Mary’s Cathedral, Limerick, and Holy Trinity Church, Rathkeale, read:

In Memoriam Eyre Lloyd, Capt[ain] 2nd Coldstream Guards, killed at Brakenlaagte, Transvaal, Oct[ober] 31st 1901 aged 30, only child of M[ajor] General Lloyd of Beechmount and Mary his wife. Capt Lloyd was Ass[istan]t Staff office to Col[onel] Benson. He left a safe but less important duty in camp and lost his life in a voluntary attempt to reach his wounded chief at the post of danger, persevering tho wounded on the way.

At the top of each monument there is a scriptural quotation:

‘Be thou faithful unto death and I will give thee a crown of life’ (Revelation 2: 10). 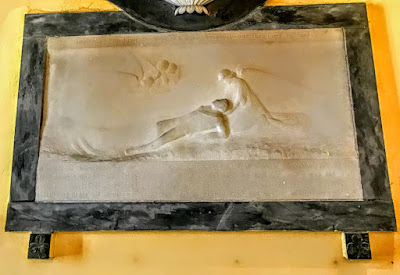 Captain Thomas Henry Eyre Lloyd was from Beechmount, near Rathkeale, Co Limerick. His ancestor, Colonel Thomas Lloyd, who bought Beechmount in Rathkeale in 1805, was a son of the Revd Thomas Lloyd and his wife Frances Bateman of Altavilla, Co Limerick.

Captain Thomas Henry Eyre Lloyd (1871-1901) was born on 2 May 1871, the eldest son of Major-General Thomas Francis Lloyd, of Beechmount, and Mary Henrietta (Althusen) Lloyd, daughter of Christian Allhusen, a Danish-English chemical and soap manufacturer living in Newcastle upon Tyne.

Eyre Lloyd was educated at Eton before entering the Coldstream Guards in 1890. He was promoted to captain in April 1899, and he left with his battalion for the Boer War in South Africa later that year in October 1899, arriving in Cape town on Sunday 12 November 1899.

He was present at the actions of Graspan, Modder River, Magersfontein, and the advance on Pretoria. Despite the horrors of war and the boredom in between, Lloyd found time to play cricket, go stag hunting and to serve as secretary of a regimental polo club.

But he was only 30 when he was killed in action on 31 October 1901 in circumstances that became controversial as he tried to save the life of a superior officer, Colonel Benson. No-one doubted Lloyd’s bravery, but his singular loyalty to his senior officer led to accusations that he had disobeyed orders, and his name was never mentioned in despatches.

Captain Lloyd and Colonel Benson were buried close to each other in Primrose Cemetery in Johannesburg.

When news of Captain Lloyd’s death reached his family and his home in Rathkeale, his parents arranged a memorial service in Holy Trinity Church, Rathkeale, on 11 November 1901, with Bishop Thomas Bunbury of Limerick and Canon O’Brien, Rector of Adare, officiating. Music was provided by the Yorkshire Light Infantry, which was stationed in Limerick at the time.

His distressed and grieving parents made every effort to clear the name of their only son. They wrote to senior generals, erected twin monuments in Holy Trinity Church, Rathkeale, and Saint Mary’s Cathedral, Limerick, and a third monument in Saint Mary’s, the Roman Catholic Parish Church in Rathkeale.

This third memorial, at south side of the west end of Saint Mary’s Church, illustrates his parents’ determination to clear the name of their only son in later years. An inscription below reads:

Given by M[ajor] General & Mrs Lloyd of Beechmount. In memory of their only child, T.H. Eyre, Capt[ain] II Coldstream Guards. Killed in a voluntary attempt to reach his wounded chief at Brakenlaagte, Transvaal. Oct[ober] 31st 1901. Aged 30.

The Lloyd family believed their son’s name was finally vindicated in letters from Field Marshall Earl Roberts, commander-in-chief of the army, and Lord Kitchener.

Beechmount had passed to Major Langford by the middle of the last century, and is now a stud and racing stable run by the McNamara family. 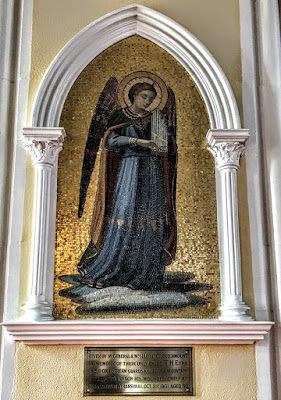 The memorial to Captain Eyre Lloyd at south side of the west end of Saint Mary’s Church, Rathkeale (Photograph: Patrick Comerford)