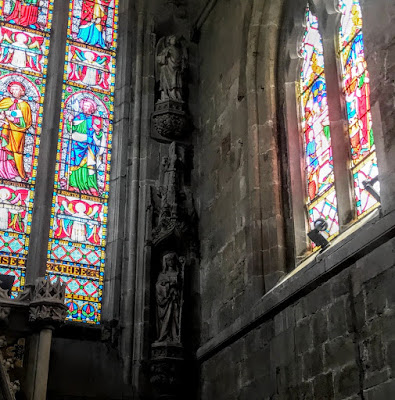 Saint Editha represented in a statue in the south-east corner of the chancel in Saint Editha’s Church, Tamworth (Photograph: Patrick Comerford, 2019)

I was in Saint Editha’s Church in Tamworth on Thursday evening at the invitation of the Tamworth and District Civic Society to speak about the Comberford Family, Comberford Hall and the Moat House.

I returned to visit Saint Editha’s Church on Friday morning [10 May 2019] and to visit the Comberford chapel. But I also took time to view the three windows telling the story of Saint Editha.

So, who was Saint Editha? And why did she give her name to the parish church in Tamworth.

Editha is said to have been the devout Christian daughter of Athelstane, King of Mercia, the expansive Anglo-Saxon kingdom in the Midlands which had its ecclesiastical capital in Lichfield and its civic and political capital in Tamworth.

Saint Editha was to be given in marriage by her father, or her brother, in the year 925 to Sigtrygg, the Norse ruler of Northumbria in the North of England. It was not exactly a love marriage, and was planned as a symbol of peace between the two kingdoms. Fifty years earlier, the Vikings had invaded Mercia from the north, and had ransacked Tamworth.

The legend says that Editha refused to marry Sigtrygg unless he agreed to convert to Christianity. The marriage took place in the church in Tamworth, but Sigtrygg reneged on his undertaking, returned north without Editha. The marriage was never consummated and was annulled.

Saint Editha, who always wanted to be a nun, joined a convent near Tamworth at Polesworth, which may have been founded by that other Staffordshire saint, Saint Modwen, or Saint Modwenna, a female hermit who lived near Burton-on-Trent.

She later became the Abbess of Tamworth, and was known for her charitable deeds. She died in 960, and the memory of her inspired great devotion to her in Tamworth.

When the wound refused to heal, Marmion decided to restore Saint Editha’s former nunnery to the Benedictine nuns, who build a new convent on the site.

In the late 19th century, Ford Madox Brown (1821-1893), one of the great Pre-Raphaelite painters of his day, was commissioned by a Mr Willington, to design the windows telling the story of Saint Editha. These magnificent windows, high up in the clerestory on the south side of the chancel, were made at the studios of William Morris (1834-1896), a Pre-Raphaelite and a member of the Arts and Crafts Movement.

The first of three window tells the story of the marriage of Editha of Mercia and Sigtrygg of Northumbria (Photograph: Patrick Comerford, 2019) 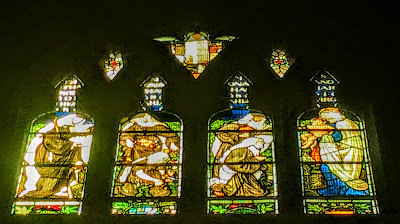 The second window shows Saint Editha and her nuns witnessing a vision of the Virgin Mary (Photograph: Patrick Comerford, 2019)

The panel at the top of this third window shows Tamworth Castle. The four heraldic panels at the foot of the window depict the arms of William the Conqueror, the Marmion family and their successors at Tamworth Castle, and the Willington family.

Other churches dedicated to Saint Edith include Church Eaton in Staffordshire, Amington Parish Church near Tamworth, Saint Edith’s Church in Monks Kirby, Warwickshire, and a number of churches in Louth, Lincolnshire. Her feast day is 15 July. 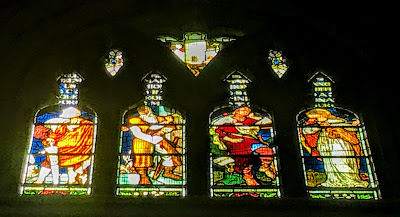 The third window tells the story of the Marmion family of Tamworth Castle and a vision of Saint Editha (Photograph: Patrick Comerford, 2019)