My talk on Thursday night [9 May 2019] in Saint Editha’s Church, Tamworth, on the Comberford Family and the Moat House in Tamworth, was organised by Tamworth and District Civic Society to mark the 400th anniversary of the visit of King James I and his son Prince Charles, later King Charles I, to Tamworth in 1619.

It was not the first, nor was it the last, royal visit to Tamworth. Previous royal visitors to Tamworth after the Norman Conquest included Henry I, sometime between 1109 and 1115, Henry II, who was accompanied by Thomas á Becket in 1158, Henry III in 1257, Edward II in 1325, and Edward III in 1330.

During the royal visit 400 years ago in 1619, James I stayed at Tamworth Castle, while his son, the future Charles I, stayed at the Moat House. At the time, Tamworth was a divided borough, with the castle in Warwickshire and the Moat House on Lichfield Street in Staffordshire. 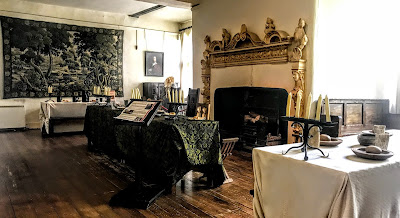 The dining room in Tamworth Castle … James I was entertained here in 1619 (Photograph: Patrick Comerford, 2019)

There was strong rivalry between the families of these two main residences in the town, with the Ferrers family of Tamworth Castle claiming the lordship of the manor of Tamworth, and they were irked by the Comberford family’s assertions that they were the Lords of the Manor of Tamworth – well, at least in the part that was in Staffordshire.

For their part, the Ferrers family had not made life easy for the Comberfords at the Moat House in the previous decades, organising raiding parties in search of priests who were said to have said Mass there and slipped away through a hidden ‘priest’s hole’ to waiting boats on the River Tame that would take them to another Comberford manor house in Wednesbury.

After Thursday’s lecture, it was time to put those old family rivalries to one side, and I visited Tamworth Castle yesterday afternoon [10 May 2019]. 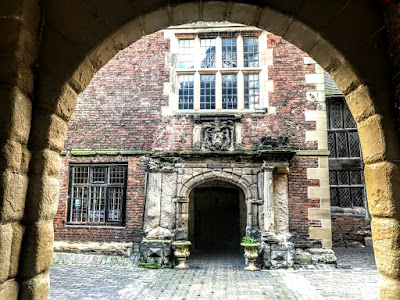 Tamworth Castle stands above the point where the River Anker and the River Tame meet and is one of England’s best preserved motte-and-bailey castles. Until the changes in county boundary in 1889, the castle site was in Warwickshire, while most of the town, including the Moat House, was in Staffordshire.

This was the site of the residence of the Anglo-Saxon kings of Mercia. When Tamworth became the chief residence of Offa, ruler of the expanding Mercian kingdom, he built a palace there. From the year 781, many charters were issued from the sedens in palatio regali in Tamoworthige. However, the castle was abandoned during successive Viking invasions, and little trace of its former glory survived the Viking attack in 874 that left the town ‘for nearly forty years a mass of blackened ruins.’

Tamworth was rebuilt in 913 by Æthelflæd, Lady of the Mercians, who had newly fortified the town with an earthen burh. However, this did little to protect the town when it was again sacked by the Vikings in 943.

There is no further mention of Tamworth as a royal residence in the years that followed, although a mint there struck coins for later Anglo-Saxon kings and later for William the Conqueror. 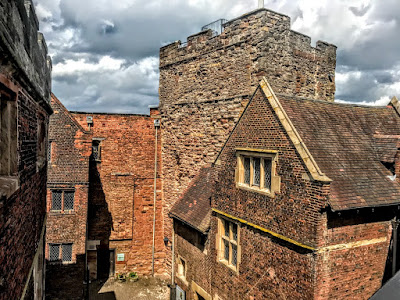 The site of Tamworth Castle was granted to William the Conqueror’s steward, Robert Despenser, who built a wooden castle in the typical Norman motte and bailey style in the 1080s. His castle stood on the south-west part of Æthelflæd’s earlier burh, and was the forerunner of the present building.

Robert Despenser had no children when he died and the castle passed to his nieces. One of these nieces, Matilda, married Rogert Marmion, who inherited Tamworth Castle in 1095. The Marmion family were hereditary champions of the Dukes of Normandy and the Kings of England. They held the castle for almost two centuries from 1095 to 1291.

During their time, the original wooden castle at Tamworth Castle was replaced by a castle, and the shell keep wall and tower built in 1170-1190 are the oldest parts of the castle. 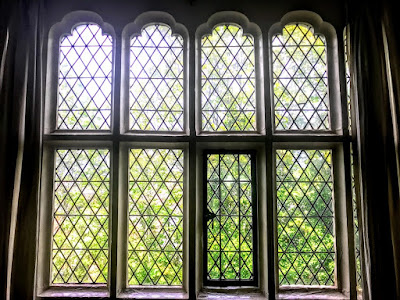 A window in the dining room in Tamworth Castle (Photograph: Patrick Comerford, 2019)

Before the signing of Magna Carta, Sir Robert Marmion sided with the barons against King John in 1215. In revenge, the king jailed Robert’s son Geoffrey, confiscated Robert’s lands, and ordered the demolition of Tamworth Castle. But the castle was only partially destroyed when King John died in 1216, and Robert’s sons regained their father’s lands.

Philip Marmion was the last male member of his family to own Tamworth Castle. He had no legitimate sons, and when he died in 1291 the castle passed first to his daughter and then to her niece Joan, wife of Sir Alexander Freville.

The Ferrers family made many alterations and additions to Tamworth Castle over almost three centuries, especially in the Elizabethan and Jacobean period.

The moat on the town side had fallen into disuse and from the 15th century on parts of it were leased to the houses on that side of Market Street. The end of the Wars of the Roses in 1485 brought peace and stability to England, and during the Tudor period the castle was the castle transformed from a fortress into a grand home.

The south wing was completed in the Stuart period, and this was the last structure built within the courtyard. 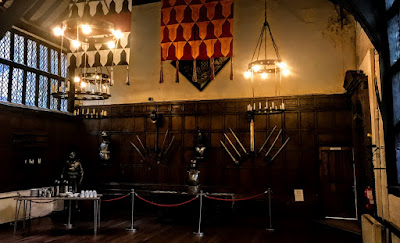 The shell keep of the castle contains a 12th century gate tower and later residential accommodation in an H plan comprising a 13th century, three-storey north range, and a 17th century Jacobean three-storey south range linked by the 15th century oak timbered Great Hall. A notable exterior feature surviving from early times is the herring-bone pattern of masonry laid diagonally at the base of the causeway leading up to the gate tower.

King James I returned to Tamworth Castle as a guest of the Ferrers family in 1621 and 1624, but there were no further royal visits to the Comberford family at the Moat House. 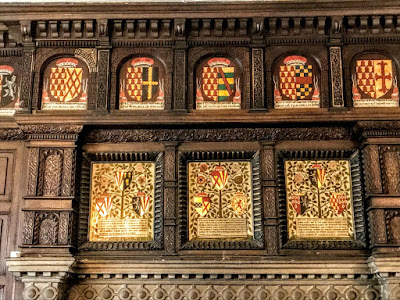 The heraldic decoration of the ‘Withdrawing Roo,’ illustrating the descent of the Ferrers family and their kinship with the royal family of Scotland (Photograph: Patrick Comerford, 2019)

During the English Civil War, Tamworth Castle was captured by the Parliamentarian forces on 25 June 1643 after a two-day siege. The Roundhead garrison of 10 officers and 77 soldiers was under the command of the military governor, Waldyve Willington.

The castle passed by marriage in 1688 to the Shirley family of Chartley and then in 1715 to the Comptons when Elizabeth Ferrers married the 5th Earl of Northampton.

During this period, the castle again fell into disrepair but it was refurbished again after Charlotte Compton married George Townshend of Raynham in 1751. When the Townshend family moved in, the castle experienced changes in fortune, from neglect to renovations that included rebuilding the external wall of the south range. 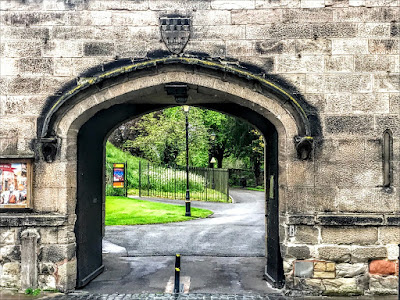 The gatehouse at the foot of the Holloway was built in 1810 (Photograph: Patrick Comerford, 2019)

A new gatehouse was built in 1810 at the foot of the Holloway, where the road ran south along the Lady Bridge. From here, a carriageway wound up through the grounds to the castle entrance.

The Townshend family was forced to sell Tamworth Castle to pay off debts in 1821, but they bought it back again in 1831. However, the castle was let out to tenants for most of the 19th century, including Thomas Cooke, who lived there 1867.

The Townshend family put the castle up for sale by auction in 1891, when it was bought by Tamworth Corporation, to mark Queen Victoria’s diamond jubilee. As well as maintaining the building and developing it as a tourist attraction, Tamworth Corporation has also landscaped the castle grounds as a public park. 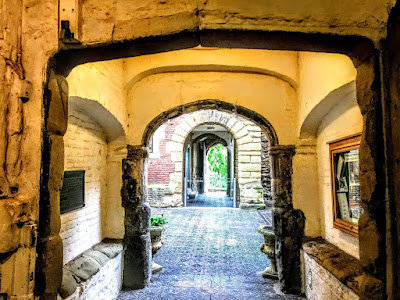 Looking from the Great Hall into the courtyard at Tamworth Castle (Photograph: Patrick Comerford, 2019)