How Butlers, bishops
and a Guinness bought
and sold the Aran Islands

A view across Inishmore, the largest of the Aran Islands … the island landlords have included the Butler, Digby, St Lawrence and Guinness families (Photograph: Patrick Comerford, 2019)

The three islands of the Aran Islands – Inisheer, Inishmaan and Inishmore – all form the Barony of Aran in Co Galway.

Following the Cromwellian wars and the restoration of Charles II, the Aran Islands were granted in May 1662 to Lord Richard Butler (1639-1686), the fourth son of James Butler, 1st Duke of Ormonde, who was given the titles of Earl of Arran (sic), Viscount Tullough and Baron Butler of Cloughgrenan.

Richard Butler was only a 22-year-old at the time, so the islands and the title that went with them were less a recognition of talent and potential and more the gift of a doting father, for the Duke of Ormonde was the most powerful political figure in Restoration Ireland and the Lord Lieutenant.

Richard made his own political mark, however, and perhaps the Aran Island gave him an added taste for the sea too. As a reward for his bravery in sea battles against the Dutch, he was given an additional title in the English peerage in 1673.

When William Howard (1614-1680), Viscount Stafford, was tried for high treason in the bogus Popish Plot in 1680, Arran was one of 31 peers who voted Stafford not guilty. As the most junior English peer, Arran was the first to cast his vote; his vote of ‘not guilty’ took some courage. However, 55 peers voted to find Stafford guilty.

Arran was Lord Deputy of Ireland from 1682 to 1684, while his father, the Duke of Ormonde, was in London. During this period, Arran showed courage and initiative in leading the attempt to put out a major fire at the State Apartments in Dublin Castle in 1684. He gave his name to Arran Quay, beside Ormonde Quay, on the north quays in Dublin, and to Arran Street nearby.

Arran’s first wife, Lady Mary Stuart (1651-1668), was a distant cousin of the king and a daughter of James Stuart, 1st Duke of Richmond. They had no children, and his second wife was Dorothy Ferrers, daughter of John Ferrers of Tamworth Castle.

John Ferrers was so proud of his daughter’s marriage, that Dorothy and her husband are singled out for mention on his monument in the west porch of Saint Editha’s Church in Tamworth. 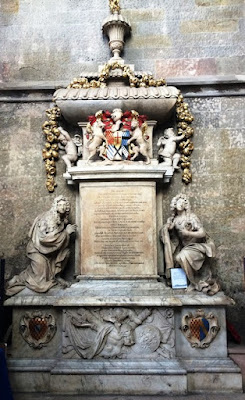 The monument to Sir John Ferrers in Tamworth boasts of his links with the Butlers of Kilkenny and the Aran Islands (Photograph: Patrick Comerford)

Richard died of pleurisy in London in 1686, and Dorothy Ferrers died in 1716. They had no surviving male heirs to inherit either the Aran Islands or the title of Earl of Arran. The titles might have died out, but they were revived on March 1693 by William III for Richard’s 22-year-old nephew, Charles Butler (1671-1758), who once again was made Earl of Arran, Viscount Tullough and Baron Butler of Cloughgrenan.

Charles was a younger brother of James Butler (1665-1745), 2nd Duke of Ormonde, who became a Jacobite in 1715, went into exile, and lost his titles. Charles bought out his brother’s estates, including Kilkenny Castle, and it has since been argued that he legitimately succeeded as 3rd Duke of Ormonde in 1745, although he never used the title.

As Earl of Arran, he was Chancellor of the University of Oxford. He was suspected of sharing his brother’s Jacobite sympathies, and in 1722 the Jacobite ‘Old Pretender,’ James III, gave him the title of Duke of Arran.

But Charles Butler was never known as Duke of Arran or Duke of Ormonde. He had no sons and heirs, and when he died in his lodgings in Whitehall, London, in December 1758, the Arran titles died with him, as did the title of Duke of Ormonde and the Butler connections with the Aran Islands.

At an early stage, Charles Butler may have disposed of his family interests in the Aran Islands. Simon Digby, Bishop of Elphin (1691-1720) and a former Bishop of Limerick (1679-1691), bought the Aran Islands in the early 18th century for £8,200 from the representatives of John and Richard Fitzpatrick and Sir Stephen Fox.

The Digby family of Landenstown, near Sallins, Co Kildare, continued to own the islands in the 18th century, and they and their descendants in the St Lawrence and Guinness families continued to hold vast tracts of island land for 200 years.

It appears the Landenstown Estate needed to raise cash in 1787, and renting the three Aran islands was part of this fundraising effort. The descendants of the Digby family left the management of the islands in the hands of their agents, George Thompson and his son Thomas.

John William Digby of Landenstown, landlord of the islands of Arran, married Frances Georgina Townsend in 1840. By the time of Griffith’s Valuation, the Aran Islands were the property of Peter Barfoot, his wife Henrietta Anne (Digby), and her sister Elizabeth Digby. Henrietta and Elizabeth were sisters of John William Digby, and they each owned 5,596 acres in Co Galway.

Thomas St Lawrence (1803-1874), 3rd Earl of Howth, married Henrietta Elizabeth Digby Barfoot in 1851. She was his second wife and the daughter of Peter Barfoot and Henrietta Digby.

The St Lawrence and Guinness families accepted an offer from the Congested Districts Board to buy the three Aran Islands from the Digby estate. The islands were sold for £14,000 in 1914, and the lands on the island were redistributed among local resident families.

Meanwhile, the Irish peerage title of Earl of Arran was revived once again in 1762 for Sir Arthur Gore (1703-1773), who was made Earl of Arran, of the Arran Islands in Co Galway. He had been MP for Donegal in the Irish House of Commons and since 1758 held the titles Viscount Sudley, of Castle Gore, Co Mayo, and Baron Saunders, of Deeps in Co Wexford.

Arthur Gore (1910-1983), 8th Earl of Arran, was a sponsor of the private bill that decriminalised homosexuality in Britain in 1967. The titles are now held by his son, Arthur Gore, 9th Earl of Arran, a former newspaper manager in Fleet Street and at one time a director of Waterstone’s.

Members of this branch of the Gore family include the distinguished Anglican theologian, Charles Gore (1853-1932), editor of Lux Mundi, founder of the Community of Resurrection, and successively Bishop of Worcester, Bishop of Birmingham, and Bishop of Oxford. He was a son of Charles Alexander Gore (1813-1897), who was born in Dublin Castle and brought up in the then Viceregal Lodge in Dublin, now Áras an Uachtaráin, and a grandson of Arthur Gore, 2nd Earl of Arran.

As for the Ferrers estates in Tamworth, Sir John Ferrers, who was so proud that his daughter had married the Earl of Arran, left an estate valued at £2,000. Tamworth Castle and his other properties eventually passed from one daughter to another, through the Shirley, Compton and Townshend families. In 1767, when the Townshend family came to live at Tamworth Castle, they also bought the Moat House, the former Comberford family home on Lichfield Street, Tamworth. 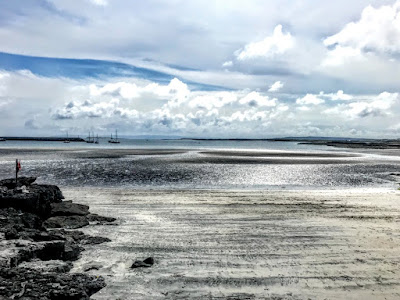 A beach on Inishmore, the largest of the Aran Islands … the St Lawrence and Guinness families sold the island rentals in 1914 (Photograph: Patrick Comerford, 2019)