‘Patriotism is not enough.
I must have no hatred or
bitterness for anyone’ 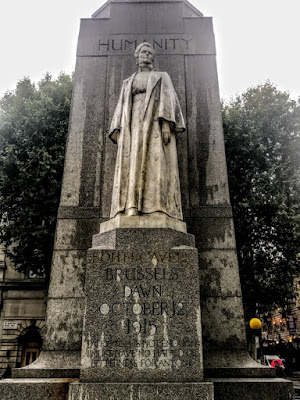 One monument in London that constantly attracts my attention is the Edith Cavell Memorial in Saint Martin’s Place, close to the north-east corner of Trafalgar Square. It stands beside the Church of Saint Martin-in-the-Fields, where I had lunch on Monday afternoon, and is close the National Gallery and the National Portrait Gallery.

Edith Cavell (1865-1915) was a nurse from Norfolk and was matron at Berkendael Medical Institute in Brussels when World War I broke out in 1914. She nursed soldiers from both sides without distinction and also helped 200 Allied soldiers escape from German-occupied Belgium. She was arrested in August 1915, court-martialled, found guilty of treason, and shot by a German firing squad on 12 October 1915.

At first she was buried in Belgium, but were brought back to Britain in May 1919 for a state funeral at Westminster Abbey before she was finally buried at Norwich Cathedral 100 years ago.

The sculptor Sir George James Frampton (1860-1928) accepted the commission, but declined any fee. He adopted a distinctively Modernist style for the memorial, which comprises a 3 metre high statue of Cavell in her nurse’s uniform, sculpted from white Carrara marble, standing on a grey Cornish granite pedestal. The statue stands in front of the south side of a larger grey granite pylon that is 12 metres high. The top of the block is carved into a cross and a statue of a mother and child, sometimes interpreted as the Virgin and Child. The whole memorial is elevated on three steps.

The inscription on the pedestal beneath the statue of Cavell reads:

The site was chosen because it is beside the first headquarters of the British Red Cross at 7 Saint Martin’s Place. 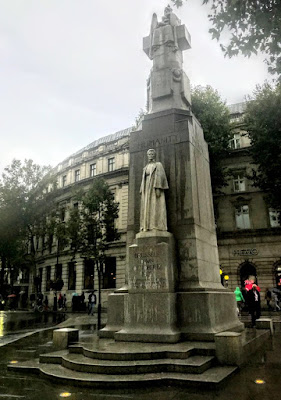 The Edith Cavell Memorial is the work of the sculptor Sir George Frampton (Photograph: Patrick Comerford, 2019)

Edith Cavell was born on 4 December 1865 in Swardeston, a village near Norwich, where her father was the vicar for 45 years. She was the eldest of the four children of the Revd Frederick Cavell (1824-1910) and his wife Louisa Sophia Warming (1835-1918), and her maternal grandmother was Irish and she had two sisters and a brother.

She was educated at Norwich High School for Girls, and then went to boarding schools at Clevedon in Somerset, and Laurel Court in Peterborough.

She was recruited by Dr Antoine Depage in 1907 as the matron of a new nursing school in Brussels. She was visiting her widowed mother in Norfolk when World War I broke out. She returned to Brussels, where her clinic and nursing school were taken over by the Red Cross.

After the German occupation of Brussels in November 1914, Edith began sheltering British soldiers, helping them to escape to the neutral Netherlands, and hiding wounded British and French soldiers and Belgian and French civilians of military age.

She was arrested on 3 August 1915, charged with harbouring allied soldiers and war treason, despite not being a German national, and was sentenced to death. The First Geneva Convention guaranteed the protection of medical personnel, but this was forfeit if used as cover for belligerent action. At her trial, she made no attempt to defend herself.

The British government said it could do nothing to help her. But Hugh S Gibson, First Secretary of the US legation at Brussels, made clear to the German government that executing her would further harm Germany’s already damaged reputation. He reminded the Germans of the burning of Louvain and the sinking of the Lusitania.

The sentence of death by firing squad was confirmed at 4.30 pm on 11th October 1915, to be carried out before dawn the next day. Her final words to the German Lutheran prison chaplain, the Revd Paul Le Seur, were, ‘Ask Father Gahan to tell my loved ones later on that my soul, as I believe, is safe, and that I am glad to die for my country.’

Pastor Le Soeur realised that Edith could not receive spiritual help from someone in a German uniform. He hurriedly called for Horace Gahan who was not at home, but eventually the message reached him to meet the chaplain at his lodgings. Learning of Edith’s fate was a very shocking moment for him.

Gahan arrived at Saint Gilles Prison that evening after 8.30 p.m. with a pass and went to Edith’s cell. There he found her calm and resigned. He recalled her words, ‘I have no fear or shrinking; I have seen death so often it is not strange, or fearful to me!’

They shared Holy Communion together and he stayed for an hour. She spoke kindly of her treatment in prison and said, ‘But this I would say, standing as I do in view of God and eternity, I realise that patriotism is not enough. I must have no hatred or bitterness towards anyone.’

The meeting ended after they softly recited the hymn Abide with Me together. On leaving, he said ‘God Bless’; she smiled and replied tenderly, ‘We shall meet again.’

Sixteen men, forming two firing squads, carried out the death sentence on her and four Belgian men in Schaerbeek at 7 a.m. on 12 October 1915. News reports after her execution were found to be only true in part. Even the American Journal of Nursing repeated the fictional account of her execution in which she fainted and fell because of her refusal to wear a blindfold in front of the firing squad. Allegedly, while she lay unconscious, the German commanding officer shot her dead with a revolver.

Pastor Le Seur, the German army chaplain, recalled at the time of her execution, ‘I do not believe that Miss Cavell wanted to be a martyr ... but she was ready to die for her country ... Miss Cavell was a very brave woman and a faithful Christian.’

Immediately after her execution, Horace Gahan wrote an important and moving account of their meeting. It was sent through the US Legation to the Foreign Office in London, where it was released. Her story was used in war-time propaganda as an example of German barbarism and moral depravity.

Edith Cavell became the most prominent British female casualty of World War I, and many memorials were created around the world to remember her.

She was also honoured in Peterborough with the naming of the Cavell car park, one of four car parks at the Queensgate shopping centre. During the refurbishment of Queensgate in 2011, there were plans to drop the names of all four car parks and refer only to them by colour, with the Cavell car park becoming the Blue car park. But the plans stirred in a public backlash and the names have been retained.

As for the Revd Horace Sterling Townsend Gahan (1870-1959), he continued to live in Brussels for a few years after World War I, and there he was sometimes known affectionately as ‘Father Pat’ because of his Irish origins.

Gahan was born in Lurganboy in the parish of Donegal on 11 November 1870, a son of Frederick Beresford Gahan, a civil engineer, and his wife, Katherine Janes (née Townsend). He was ordained deacon by the Bishop of Worcester (1894) and priest by the Bishop of Coventry (1895), and worked in parishes in the Church of England until 1905, when he returned to Ireland.

After a brief time in the Diocese of Rochester, Horace Gahan moved to Brussels as the Anglican chaplain of Christ Church, just as World War I was about to break out. He returned to England in 1923 as the rector of a parish in Leicester, and died 60 years ago in February 1959.

Edith Louisa Cavell was 49 at the time of her execution. The Church of England commemorates her in the Calendar of Saints on 12 October. 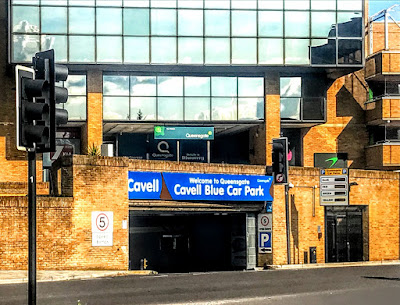