When window shopping
is simply not enough
on Charing Cross Road 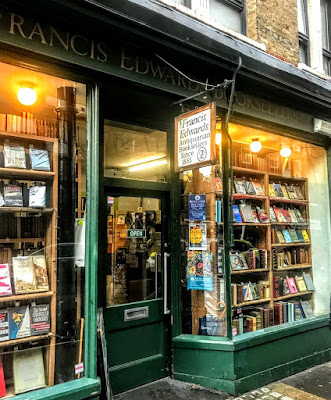 Enticed and invited by the bookshops in London this week (Photograph: Patrick Comerford, 2019)

I was staying earlier this week in the Saint Giles Hotel on Bedford Avenue in Bloomsbury, near the junction of Tottenham Court Road and Oxford Street, and around the corner from the British Museum.

This is the heart of literary London, and within a few minutes’ walking distance – if not less there are blue plaques and monuments remembering great literary figures who lived and worked in this part of London in the 19th and 20th centuries.

An unexpected plaque in Great Russell Street marks the place where Charles Kitterbell lived, as related by Charles Dickens in sketches by Boz, ‘The Bloomsbury Christening.’ 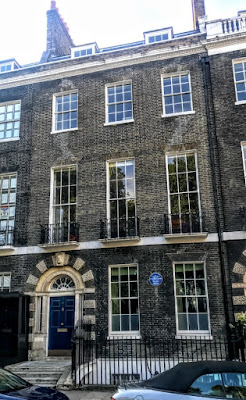 On the south side of Bedford Square, a blue plaque at No 41 recalls that Sir Anthony Hope Hawkins (1863-1933) lived there in 1903-1917. As Anthony Hope, he was the author of The Prisoner of Zenda … and there was a distant family connection there too, for his father was the Revd Edwards Comerford Hawkins (1827-1906) of Saint Bride’s Church, Fleet Street. 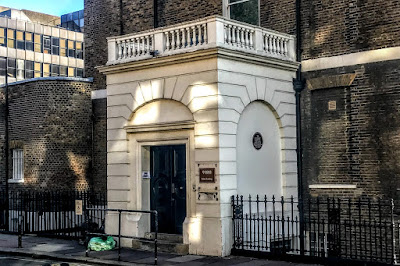 TS Eliot worked with Faber and Faber at the corner of Russell Square for 40 years (Photograph: Patrick Comerford, 2019)

At the north-west corner of Russell Square, close to the University of London and the School of Oriental and African Studies, TS Eliot worked for Faber and Faber for 40 years from 1925 to 1965. The Faber Building is now part of SOAS.

But an additional pleasure earlier this week, despite the rain, was window shopping in the bookshops as I walked along Charing Cross Road.

The American writer Helene Hanff immortalised this street in 1970 with 84 Charing Cross Road, which tells of her 20-year correspondence with Frank Doel, a buyer at the antiquarian booksellers Marks & Co that began in 1949.

But long before that book, Charing Cross Road has had an interesting collection of bookshops and second-hand bookshops. Decades ago, the street was part and parcel of London’s literary scene and the book trade.

Famous bookshops on the street include Foyles at No 107, which first opened its doors in 1907.

Legends say that in the 1950s, writers like Dylan Thomas and Auberon Waugh would emerge from basement clubs and hidden drinking places in Soho and stagger from shop to shop, scanning the heaving shelves. 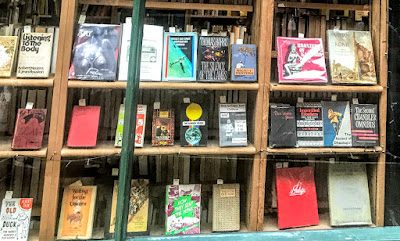 Quinto has been selling second-hand and rare books for decades. Its labyrinthine Charing Cross Road branch moved up the street in 2010 from No 48A to No 72, and is in the basement of Francis Edwards, their rare and antiquarian booksellers dating back to 1855.

Francis Edwards has its best-known outlet in Hay-on-Wye, the ‘Town of Books.’ Quinto is in the basement at Charing Cross Road, and sells all kinds of second-hand books. They completely refresh their stock for the first Tuesday of each month so there is always something new to discover. They also buy books from people with large collections to sell, but also offer to supply books in quantity for use as props or interior decoration.

Part of this month’s stock, for example, comes from the library of Anthony Lejeune, the writer, editor and literary critic who died last year at the age of 89. Lejeune had a great taste for books, from first editions Wodehouse and Edgar Rice Burroughs to vintage crime and horror stories.

In addition to Lejeune’s library, they have a few other large buys of literature and the performing arts: books about music from the rock-n-roll and football writer Paolo Hewitt, as well as large sections on classical music and opera.

Marks and Co is long gone, but Charing Cross Road still has that special atmosphere beloved of every booklover. I spent some time window shopping at Quinto and Francis Edwards on that rainy afternoon earlier this week, and it took great determination, personal resolve and self-discipline to move on and return to my hotel. 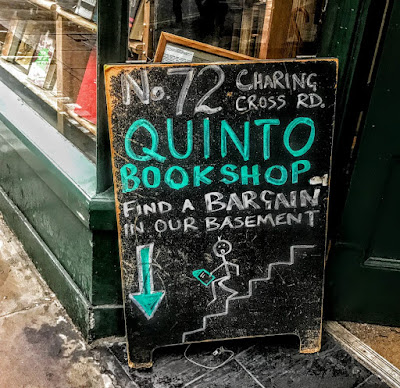 More on offer than can be seen in the window (Photograph: Patrick Comerford, 2019)