An early morning trek
to see the flamingos
on Korission Lagoon 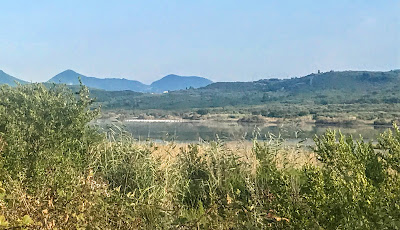 Early morning by the shores of Korission Lagoon near Agios Georgios in south-west Corfu, with a line of flamingos in the distance (Photograph: Patrick Comerford, 2019)

I got up early in the morning yesterday, to avoid the heat of the sun later in the day, and walked the 40-minutestrek to Korission Lagoon, a coastal lagoon just 3 or 4 km from Agios Georgios, where I am staying in this part of south-west Corfu.

The lagoon is separated from the Ionian Sea by the beach at Issos and Chalikouna. It has a surface area of 427 ha and drains into the sea through a channel that divides the beach in half.

Korission Lagoon and the surrounding areas are protected by the Natura 2000 Treaty. The protected area includes the nearby coastal areas, an unusual forest of prickly juniper Juniperus phoenicea, which is known as cedar, in addition to many sand dunes that rise to heights above 15 metres.

There are also small reed beds and groves of tamarisk, white water lilies (Nymphaea alba) and 14 different species of orchid in the dunes.

Over 126 species of birds have been recorded in the lagoon, including great cormorants, Eurasian wigeons, great egrets and greater flamingo. A white line of flamingos lined the opposite shore as I watched them early on Saturday morning [31 August 2019], but they were too far away to catch any details on the camera of my iPhone. 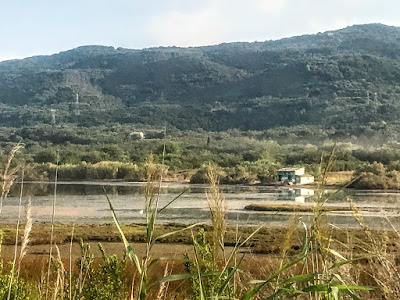 Early morning at the shore of the lagoon (Photograph: Patrick Comerford, 2019)

I grew up not knowing the names of trees or birds, small creatures or plants. But I understand there are also many species of butterfly at the lagoon, as well as the Jersey tiger moth (Euplagia quadripunctaria).

The Corfu dwarf goby is endemic to the lagoon and its surrounding springs. Other fish species found in the waters of the lagoon include the Mediterranean killifish (Aphanius fasciatus) and the Epiros minnow (Pelasgus thesproticus).

Korission Lagoon and the area around form an area that is archaeologically significant too. Geologists have found a tool said to be between 950,000 and 750,000 years old, the oldest known prehistoric artefact discovered in Greece.

Another find is said to be a large part of the right lower jaw of a hippopotamus. Other small bone fragments were found near the outflow of the lagoon. In all, 160 stone artefacts and 61 bone fragments have been found in the area around Korission Lagoon. These finds point to the need for further archaeological explorations of the area and the needs to protect it.

Before we left, we found a small taverna in a secluded spot that we thought of returning to some evening. As we walked back to Agios Georgios, the run was rising higher and the temperatures were rising too. But it was not too late to stop and enjoy breakfast close to the beach. 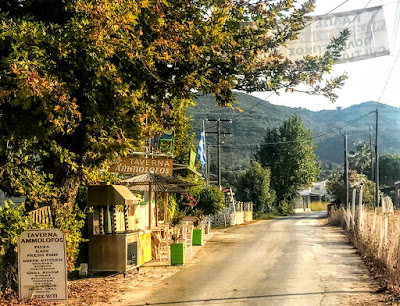