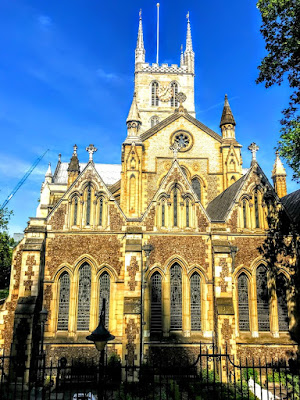 Southwark Cathedral on the south bank of the River Thames has been the cathedral of Church of England Diocese of Southwark since 1905 (Photograph: Patrick Comerford 2019)

Although Westminster Abbey is a ‘Royal Peculiar’ rather than a cathedral, all three are seen by many as the cathedrals of London.

However, London has two other cathedrals that are often missed, even by regular visitors. Southwark, on the south bank of the River Thames has two cathedrals, one Anglican and one Roman Catholic.

Southwark Cathedral or the Cathedral and Collegiate Church of Saint Saviour and Saint Mary Overie, is on the south bank of the river, close to London Bridge. It has been the cathedral of Church of England Diocese of Southwark since 1905, but there has been a church on this site for more than 1,000 years. 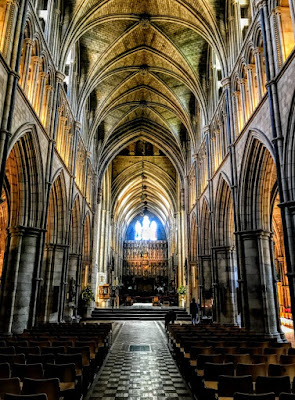 Southwark Cathedral, built between 1220 and 1420, is the first Gothic church in London (Photograph: Patrick Comerford 2019)

Local tradition says it was founded as a nunnery around the year 606 by a young woman named Mary, on the profits of a ferry across the Thames. Later it was converted into a college of priests by ‘a noble lady’ named Swithen. In time, people s tried to identify Swithen with Saint Swithun, Bishop of Winchester, who died in 863.

However, the earliest reference to the place is in the Domesday Book in 1086, when the minster at Southwark was controlled by William the Conqueror’s half-brother, Bishop Odo of Bayeux.

Southwark Minster became an Augustinian priory in 1106, under the patronage of the Bishops of Winchester, who had a London seat at nearby Winchester Palace in 1149. The Priory was dedicated to the Virgin Mary or Saint Mary, but it had the additional designation of ‘Overie’ or ‘over the river’ to distinguish it from other churches with the same name.

The cathedral retains the basic form of the Gothic structure built between 1220 and 1420, making it the first Gothic church in London.

The earlier church was severely damaged by fire in 1212, and was rebuilt in the 13th century. The rebuilt church was cruciform in plan, with an aisled nave of six bays, a crossing tower, transepts, and a five-bay choir. Beyond the choir stood a lower retro-choir or Lady Chapel, which was a group of four chapels with separate gabled roofs.

A chapel dedicated to Saint Mary Magdalen was uses by local parishioners. Another, later chapel became known as the Bishop’s Chapel because it was the burial place of Lancelot Andrewes. 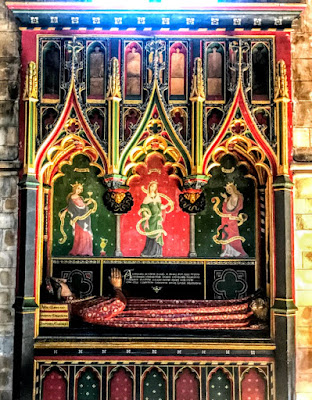 The tomb of the poet John Gower (1330-1420) … a friend and contemporary of Geoffrey Chaucer (Photograph: Patrick Comerford 2019)

The church was damaged by another fire in the 1390s. The Bishop of Winchester, Henry Beaufort, helped rebuild the south transept and complete the tower around 1420.

The poet John Gower (1330-1420) is buried in the cathedral. He was a friend and contemporary of Geoffrey Chaucer, and the Chaucer Window depicts 14th century pilgrims found in his Canterbury Tales.

A side aisle in Southwark Cathedral … at the Reformation, the priory church became a parish church (Photograph: Patrick Comerford 2019)

From Priory to Parish Church

The priory was dissolved at the Tudor Reformation, and in 1540 Saint Mary Overie became a parish church with the new name of Saint Saviour.

Because Saint Saviour’s was close to the Globe Theatre, it had close connections with the great Elizabethan dramatists. A large stained-glass window dedicated to William Shakespeare depicts scenes from his plays, and an alabaster statue at the base of the window shows Shakespeare reclining, holding a quill.

His brother, Edmund Shakespeare, was buried there in 1607, and two dramatists, John Fletcher and Philip Massinger, were buried in the church. 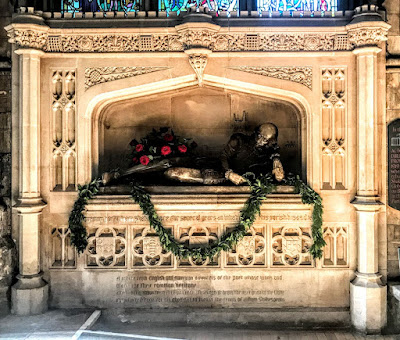 An alabaster statue of a reclining William Shakespeare, with a quill in his hand (Photograph: Patrick Comerford 2019)

The connection with the Bishops of Winchester continued after the Reformation. Lancelot Andrewes, Bishop of Winchester, and one of the translators of the Authorised Version of the Bible, was buried in the ‘Bishop’s Chapel’ in 1626. After the chapel was destroyed in 1830, his tomb was moved to a new position behind the high altar. 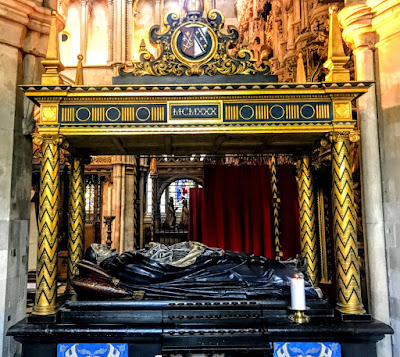 The tomb of Lancelot Andrews beside the High Altar (Photograph: Patrick Comerford 2019)

The fabric of the church had fallen into disrepair by the early 19th century, and all the medieval furnishings were gone.

The tower and choir were restored by George Gwilt in 1818-1830, who sought to return the church to 13th-century appearance. He removed early 16th-century windows. The transepts were restored by Robert Wallace, who removed the Bishop’s Chapel and parochial chapel.

The vestry decided to remove the nave roof in 1831, leaving the interior open to the weather, and services were held in the choir and transepts. The roofless nave was demolished in 1839, and a new nave was built to a design by Henry Rose. 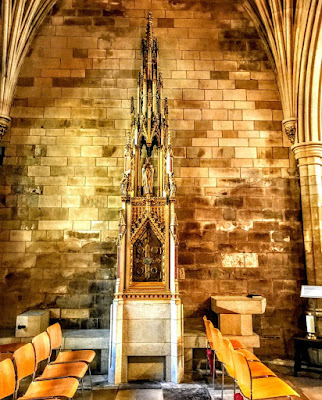 The new nave was criticised by Augustus Pugin (1812-1852), the leading architect of the Gothic Revival who said, ‘It is bad enough to see such an erection spring up at all, but when a venerable building is demolished to make way for it, the case is quite intolerable.’

The Harvard Chapel the north transept commemorates John Harvard, who was born in the parish and was baptised in the church on 29 November 1607. The tabernacle in the Harvard Chapel was designed by Pugin.

The nave was once again rebuilt in 1890-1897 by Sir Arthur Blomfield, who tried to recreate its 13th-century predecessor.

The church remained in the Diocese of Winchester until 1877, when Saint Saviour’s and other parishes in South London were transferred to the Diocese of Rochester. The Diocese of Southwark was formed in 1905, with Edward Stuart Talbot (1844-1934) as the first Bishop of Southwark, and the Collegiate Church of Saint Saviour was as the new cathedral. Bishop Talbot is also buried beside the High Altar. 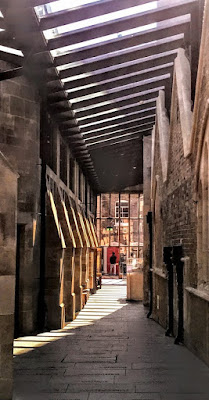 The cathedral and the surrounding area were heavily damaged by German bombing during World War II, and shrapnel damage is still visible on the outside of the building.

Nelson Mandela opened Lancelot’s Link, a new north cloister, in 2001 on the site of the old monastic cloister, with a refectory, shop, conference centre, education centre and museum. 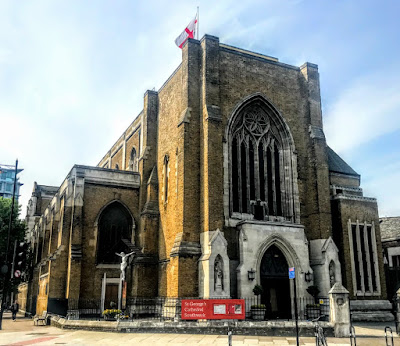 Saint George’s Cathedral, Southwark, is the cathedral of the Roman Catholic Archdiocese of Southwark.

Father Thomas Doyle (1793-1879), the son of Irish immigrants, first came to Saint George’s Chapel in Southwark in 1820. He acquired the site of the future Saint George’s, then the Royal Belgian Chapel, and bought part of Saint George’s Fields, a site associated with the anti-Catholic Gordon riots in 1780. The local Roman Catholic community was served by a small chapel, but the arrival of large numbers of Irish immigrants made a larger church a pressing need.

The cathedral was designed by Pugin, who was critical of Henry Rose’s work at this time in Saint Saviour’s, later the other Southwark Cathedral. The funds available did not match Pugin’s first ambitious plans, however, and he was forced to compromise his design. The money for the upper part of the tower and a spire was never found. 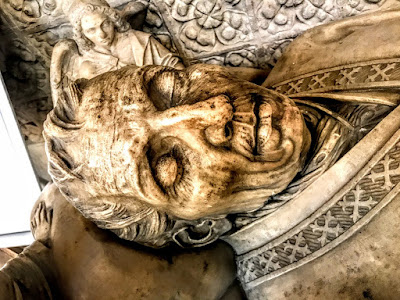 Thomas Doyle had the vision that inspired Saint George’s … his memorial is on the north wall of the cathedral (Photograph: Patrick Comerford 2019)

When it was built, Saint George’s was seen as the most important Roman Catholic Church in England. It could seat about 3,000 people, and the building was 240 ft long and 72 ft wide.

The church was solemnly opened on 4 July 1848 by Bishop Nicholas Wiseman, later Cardinal Nicholas Wiseman, Archbishop of Westminster. Pugin was the first person to be married in Saint George’s, when he married his third wife Jane Knill there on 10 August 1848.

Two years later, when Pope Pius IX restored the Roman Catholic hierarchy in England and Wales in 1850, Saint George’s was chosen as the cathedral of the new Diocese of Southwark, which was to cover the whole of Southern England. 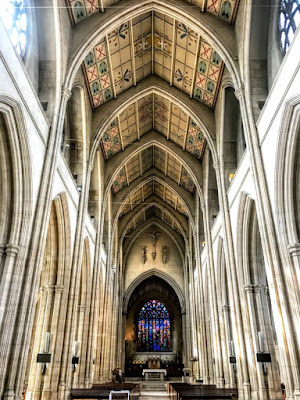 Inside Saint George’s Cathedral … chosen as the cathedral of the new Diocese of Southwark in 1850 (Photograph: Patrick Comerford, 2019)

Saint George’s was one of the first four Roman Catholic churches in England and Wales – and the first in London – to become a cathedral since the English Reformation. Thomas Doyle, who became the Provost of Saint George’s, died in 1879.

For half a century, Saint George’s remained the centre of Roman Catholic life in London until Westminster Cathedral opened in 1903.

Saint George’s was the venue for the funeral Mass of the nationalist Lord Mayor of Cork, Terence MacSwiney, in October 1920 after he died on hunger strike in Brixton Prison. 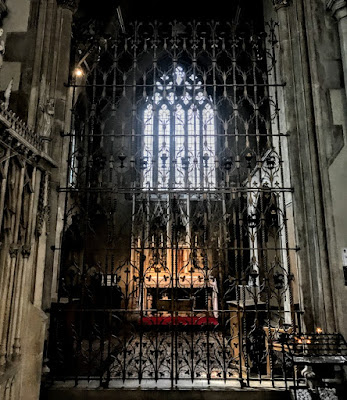 A German bomb hit the cathedral on the night of 16 April 1941, starting a fire that destroyed the wooden roof and much of the cathedral. An adjoining hall became the pro-cathedral, the architect Romilly Bernard Craze (1892-1974) was commissioned to rebuild the cathedral.

Work began in 1953, and in the new cathedral, Craze tried to blend an Arts and Crafts and Gothic Revival styles with surviving elements of the pre-war building. He used different types of Gothic used to suggest age, as in ancient cathedrals built over different time periods. The Day Chapel (1963) has a Tudor-derived pattern, while the Baptistry (1966) was inspired by the Perpendicular.

The addition of the clerestory introduced light, air and a grandeur that were previously lacking. But once again, there was no money for the upper part of the tower and a spire.

The rebuilt cathedral was consecrated on 4 July 1958, and solemnly opened by Bishop Cyril Cowderoy. When the Diocese of Southwark became a metropolitan see in 1965, Bishop Cowderoy became the first Archbishop of Southwark. 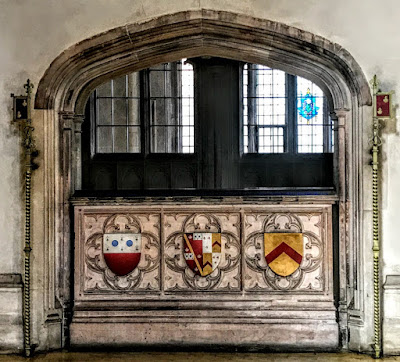 The Petre Chantry (1848) by AWN Pugin is a perfect Gothic gem in the Perpendicular style (Photograph: Patrick Comerford 2019)

The Petre Chantry commemorates Edward Petre (1794-1848) and his wife, Laura Stafford-Jerningham (1811-1886), who later became a nun. The Knill Chantry (1857), by Pugin’s son, Edward Pugin, commemorates the family of Janes Pugin, including her cousin, Sir Stuart Knill, who became Lord Mayor of London. 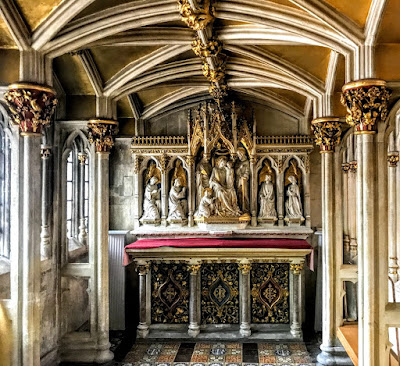 The Knill Chantry (1857) by Edward Pugin is dedicated to the family of Pugin’s third wife (Photograph: Patrick Comerford 2019)

The Lady Chapel holds a small 18th century Flemish statue of the Virgin and Child known as ‘Our Lady of Saint George’s.’ The Baptistry, the newest part of the cathedral, has a window by the Harry Clarke Studios depicting the Resurrection.

The Sanctuary was re-ordered in 1989 by the architect Austin Winkley to emphasise the focal points of the liturgy. The East Window depicts the crucifixion and saints in the history of the Church in England and Wales. The glass is by the Harry Clarke Studios, but the stone tracery is Pugin’s original. 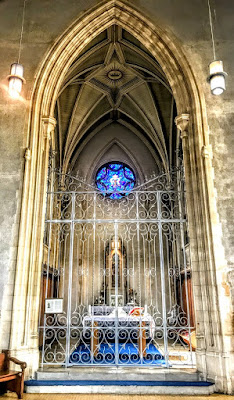 The Lady Chapel was completed in 1963 (Photograph: Patrick Comerford 2019)

Archbishop John Wilson, a former auxiliary bishop of Westminster, was installed as Archbishop of Southwark earlier this summer, in succession to Archbishop Peter Smith.

These two cathedrals in Southwark have a close working relationship. They are a few minutes’ walk from South Bank and the Thames, Westminster Bridge, the London Eye, and landmarks including Saint Thomas’ Hospital and Waterloo Station. 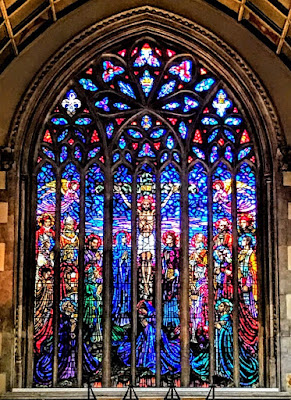 The East Window by the Harry Clarke studios depicts the crucifixion and saints … the stone tracery is Pugin’s original (Photograph: Patrick Comerford 2019)

Canon Patrick Comerford blogs at www.patrickcomerford.com . This feature was first published in September 2019 in the Church Review, the Dublin and Glendalough diocesan magazine