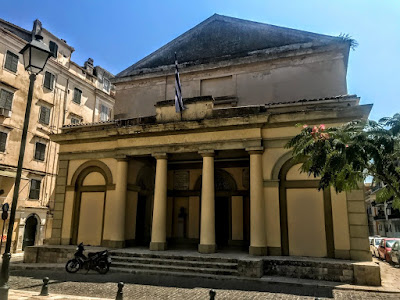 When I am in Greece, normally attend the local Greek Orthodox Church on a Sunday, and Athens is the only part of Greece where I have intentionally sought out an Anglican church.

However, Corfu has its own Anglican church, Holy Trinity Church, at 21 L. Mavili Street, beside the former House of the Ionian Parliament, which served for many decades as the Anglican church in the city.

There has been an Anglican presence in Corfu since 1814 Corfu, when Corfu and the other Ionian Islands became a British Protectorate.

The High Commissioner, the administrators, and the soldiers and sailors based in Corfu, required a place of worship, and a chapel was built in the Doric style in the Old Fortress and was named Saint George.

Saint George’s remained the garrison church until 1864, when Corfu and the other Ionian Islands were incorporated into the modern Greek state. The Greek parliament in Athens wanted to turn the old fortress into a military base, and Saint George’s became an Orthodox church. Indeed, this was the church where Prince Philip, later the Duke of Edinburgh, was baptised according to the rites of the Greek Orthodox Church in 1921. 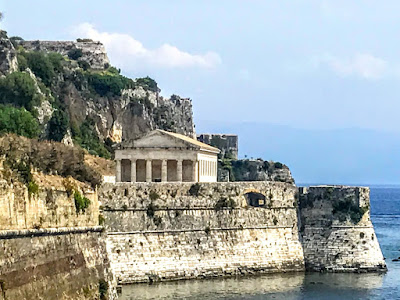 Meanwhile, it was accepted that the British community in Corfu needed an alternative place of worship.

This conditional gift was ratified in Greek law by an Act of Parliament in 1869, and the building was given to the ‘British community of Kerkyra (Corfu) of the Anglican faith so long as it might serve as a house of worship of the said persuasion.’

The deed of consecration was signed in 1870. The Ionian Parliament became Holy Trinity Church and the premises to the rear became the parsonage or residence of the Anglican chaplain.

Holy Trinity Church was in a unique position because it belonged not to the British Government nor any church body, but solely and entirely to the Anglican community in Corfu.

The church flourished from 1869, with a permanent resident chaplain until 1940, and for 71 years the church served the island’s many British residents.

With the outbreak of World War II, most British residents left Corfu, and the Commonwealth and Continental Church Society (now ICS) was appointed trustee of the church.

The church was bombed and gutted during World War II, leaving only parts of the outside walls. Although the parsonage to the rear suffered considerable exterior damage from the bombs, it was used to provide shelter for the Maltese community, whose presence prevented pilfering during the war.

They carried out emergency repairs and salvaged what they could from the derelict church. Some of the Maltese were members of the Britannia Association, which held their meetings there regularly until the 1980s.

However, the British community had still not returned to Corfu by 1950, the Mayor of Corfu took advantage of this situation and asked for the derelict church to be handed over to the Municipality of Corfu in order to restore it. Although this was not legal, the then Bishop of Gibraltar and the British Embassy in Athens consented, and the restoration of the building was completed in 1962. 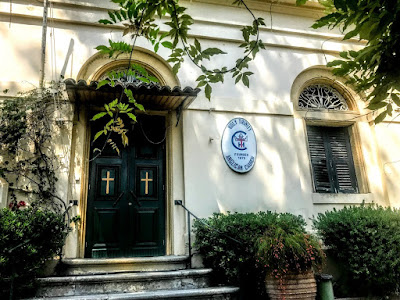 The residence at the back of the former church was recovered for Anglican worship and reopened in 1971 (Photograph: Patrick Comerford, 2019)

Later, through negotiations, the residence part of the building was retained, repaired and served many uses as the British Vice Consulate, a community centre for the Roman Catholic Maltese, a place of worship for Anglicans and storage rooms for numerous packing cases belonging to the British Council.

While he was the British Vice Consul, Major John Forte set about bringing some order to this situation. He began getting rid of the packing cases, and posted a notice that Holy Trinity was open daily during the week for public worship from 9 until 1. Chaplain’s visits at the time were infrequent, but by the end of 1970 ICS decided to provide ministry on a more permanent basis.

The consulate had to move and the living quarters became a home for a permanent chaplain. The downstairs rooms that had once been servant’s quarters became living accommodation for seasonal chaplains.

On Easter Day 1971, Holy Trinity Church Corfu reopened on a permanent basis for the first time in 31 years. Major Forte became the churchwarden and remained until 1975. 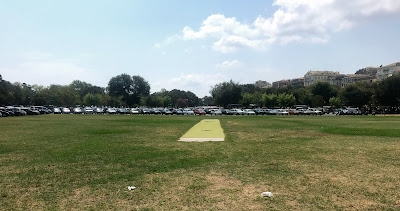 Major John Forte is known for reviving the game of cricket in Corfu (Photograph: Patrick Comerford, 2019)

Major Forte, who died in 2012, is also known for reviving the game of cricket in Corfu after World War II and for helping to prevent L Ron Hubbard, the founder of Scientology, from setting up a university on Corfu in 1968.

Margaret Woodley, who succeeded Major Forte as churchwarden in 1975, was made MBE in 1999 ‘for services to Holy Trinity Corfu’. She died in London in 2013.

Today, Holy Trinity has a vital congregation that continues to reach out to residents and visitors alike in Corfu. 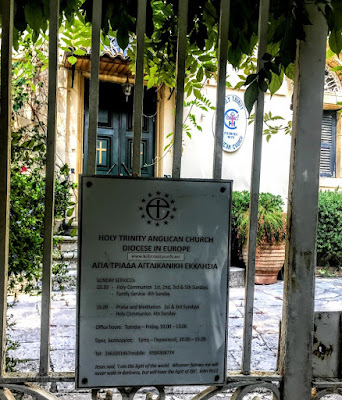