Franco’s funeral and
refusing to whitewash
his racism and oppression 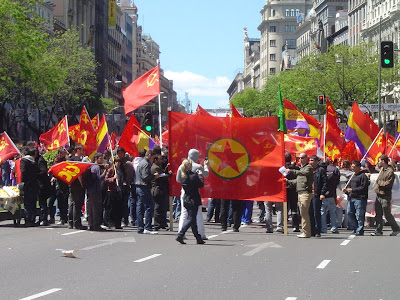 Madrid was a riot of red flags and banners, interspersed with a sprinkling of black-and-red anarchist banners and a good measure of old Spanish republican flags of red, yellow and purple on May Day ten years ago (Photograph: Patrick Comeford)

As I watched the news reports over these two days on the reburial of Franco, memories came back of waiting up on many long nights as a young journalist in The Irish Times, waiting for Franco to die so the city editions could run his obituary.

But the dictator died on 20 November 1975, on a night that I was off work. The same happened to me three months earlier when Eamon de Valera died on 29 August 1975, once again on a night when I was off after sitting through many late shifts.

I had joined the staff of The Irish Times from the Wexford People less than 12 months earlier the previous year. Who was I to complain at the time that after two consecutive runs of long, late-night shifts I never got to shout the old hackneyed phrase: ‘Hold the Front Page’?

And over these two days, memories came back too of spending May Day in Madrid ten years ago.

I had long avoided visiting Spain. At first, my excuse was the Franco regime and the lack of human rights. Later, in my own stupid snobbery, I pretended I was being deterred by images and prejudices created by popular package holidays and high-rise beach resorts.

Eventually, Ryanair persuaded me I was wrong, and I spent the May bank holiday weekend in Madrid in 2009. I quickly realised the city is one of the architectural capitals of Europe with some of the finest art galleries and museums, including the Prado, with its collections of Goya and Velazquez, the Centro de Arte Reina Sofía, which houses Picasso’s Guernica, and the Thyssen Bornemisza, with major works by Titian, Goya, Picasso and Rubens.

I set off early one morning to see some of those magnificent sights that I had seen from the outside from the top of the red bus the previous day. But I had forgotten it was May Day, and – of course – after the decades of fascism and oppression Spain had endured under Franco, May Day is celebrated with style in Madrid, and the workers have a day off.

From Plaza de Cibeles to Sol, Calle de Alcala was a riot of red flags and banners that May Day, interspersed with a sprinkling of black-and-red anarchist banners and with a good measure of old Spanish republican flags of red, yellow and purple.

If the right-wing can be triumphal in the Catedral de la Almudena, then at least on May Day the streets of Madrid belong to the left and to the workers. In Plaza de Cibeles, even Cybele and her chariot were bedecked in red and republican colours.

It is disturbing how politicians, journalists and amateur historians have tried to rewrite and sanitise Franco’s story since he died in 1975. The ‘fake history’ stories include a claim that Franco saved more Jews from the Holocaust than any other single person.

Franco may have had some Jewish ancestry on both his father’s and his mother’s sides, but no-one knows for sure … and even he may not have known. The name Franco is particularly associated with Jewish families in Spain before the Inquisition, and rumours of Franco’s Jewish ancestry were reported by Sir Robert Hodgson, a British diplomat, and repeated by Sir Samuel Hoare, the British ambassador in Madrid during World War II. The Nazis ordered an investigation, but this was inconclusive.

However, we know that Franco generally spoke in vile terms about Jews and openly expressed his antisemitic prejudices.

But we know that Franco generally spoke in vile terms about Jews and openly expressed his antisemitic prejudices.

At his victory parade in May 1939, Franco vowed to remain alert to the ‘Jewish spirit which permitted the alliance of big capital with Marxism.’ A few months later, he severely criticised Britain and France and justified the persecution of what he referred to as those races marked by the stigma of their greed and self-interest.’

Later, the Franco regime claimed there was an international conspiracy of Jews and Freemasons against Spain, the contubernio judeo-masonico.

Franco met Hitler on 23 October 1940 in Hendaye, near the Franco-Spanish border. Franco’s demands included Gibraltar and parts of French north Africa, but Hitler is reported to have furiously declared that he ‘would rather have three or four teeth pulled out’ than spend more time with Franco.

Throughout 1940 and 1941, Spain issued strict orders against allowing refugees to enter its territory. Despite this, about 20,000 to 30,000 Jews entered Spain. But they passed on through Portugal to Britain and the US. Many other Jews were arrested by the Spanish authorities who intended to return them to France. This would have meant certain death for them.

On 5 May 1941, Franco’s Dirección General de Seguridad ordered each civil governor to compile a list of ‘all the national and foreign Jews living in the province … showing their personal and political leanings, means of living, commercial activities, degree of danger and security category.’

Provincial governors were ordered to look out especially for Sephardic Jews, descendants of those expelled from Spain in 1492, because their Ladino language and Hispanic background helped them fit into Spanish society. ‘Their adaptation to our environment and their similar temperament allow them to hide their origins more easily,’ said the order issued in May 1941.

These lists of 6,000 members of ‘this notorious race’ helped to compile the Archivos Judaicos, which Franco’s regime maintained at least until 1944. El Pais claimed in 2010 that, as Spain negotiated its possible entry into the war on the side of the Axis powers, the list was handed to Heinrich Himmler.

Among the Sephardim, the descendants of Jews expelled from Spain by the Inquisition in the late 15th century, at least 550 Sephardim in Thessaloniki in Greece had Spanish papers.

In an example of singular bravery, the Spanish consul general in Athens, Sebastian Romero Radigales, mounted an heroic effort to save them, managing to move some to the relative safety of the Italian-controlled zone, and – despite their deportation to Bergen-Belsen – ensuring another 365 were brought to Spain by train in February 1944. However, Franco insisted the Sephardim could move through Spain but not remain there.

In German-occupied Hungary in March 1944, two Spanish diplomats in Budapest, Angel Sanz Briz and Giorgio Perlasca, issued passports, letters of protection and placed Jews in rented buildings under the Spanish flag. These two men saved the lives of around 5,200 Hungarian Jews. Sanz Briz was later honoured at Yad Vashem.

I am reminded this week too of the story told by Ronnie Drew in Sez He and by many others of how Brendan Behan decided to go to Spain on holidays while it was still struggling Franco’s brutal regime.

When he arrived at Madrid Airport, Behan found the police had obviously been advised about his political views and were waiting for him at the passport checkpoint.

‘What is the purpose of your visit to Spain, Mr Behan?’

‘I have come to attend General Franco’s funeral.’

‘But the Generalissimo is not yet dead.’

As I strolled in the atmospheric streets south of Plaza Mayor that May Day ten years ago, elderly couples proudly displayed lapel pins with the flag of Republican Spain. They had endured decades of suffering and oppression and cruelty throughout the Franco years, and now they were having their day in the sun. Those who survive must be relieved that Franco has been removed this week from his place in the sun in the Valley of the Fallen, built built by the forced labour of political prisoners. 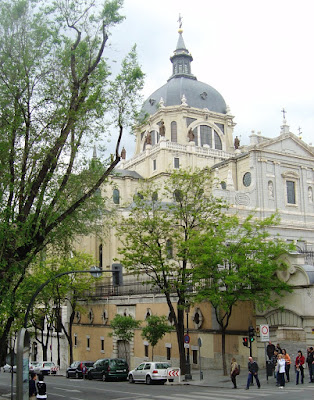