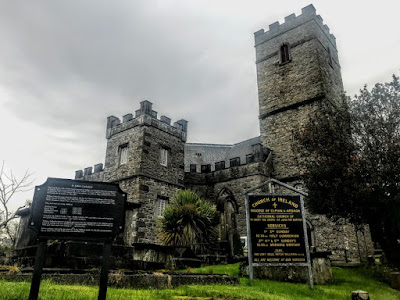 The Cathedral of Saint Mary the Virgin and Saint John the Baptist … the Church of Ireland Cathedral in Sligo since 1961 (Photograph: Patrick Comerford, 2019)

I visited the cathedral last weekend while I was attending a family wedding in the neighbouring Roman Catholic Cathedral of the Immaculate Conception.

Saint John’s Cathedral on John Street is almost certainly built on the site of a mediaeval hospital and parish church, founded in the 13th or early 14th century and dedicated to the Holy Trinity. Some of this 13th century work is likely to be incorporated in the west tower of the present cathedral.

A royal visitation of Sligo in the early 17th century reported the church was ‘recently repaired.’ However, during the armed conflicts later that century, the church was used as the military headquarters of insurgent forces. 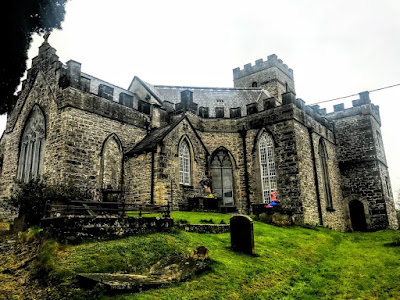 When the German-born architect Richard Cassel (1690-1751), came to Sligo in 1730 to design Hazelwood House for Colonel Owen Wynne, he was also commissioned by the new Rector of Sligo, the Revd Eubele Ormsby, to rebuild Saint John’s Church.

Cassels was considered one of the greatest archiects working in Ireland at the time. He was responsible for designing of many prestigious buildings in Ireland at the time, including Leinster House, Dublin; the Dining Hall in Trinity College, Dublin; Powerscourt House, Co Wicklow; Russborough House, near Blessington, Co Wicklow; Carton House, Co Kildare; Westport House, Co Mayo; and the Rotunda Hospital, Dublin. But he designed only three churches in Ireland: Knockbreda Parish Church, Belfast, the now-demolished old Parish Church of Castlebar, Co Mayo, and Saint John’s Church, Sligo.

The mediaeval church in Sligo was demolished, and in his designs for a new Saint John’s Church Cassel was greatly influenced by the basilica pattern in early Roman architecture. 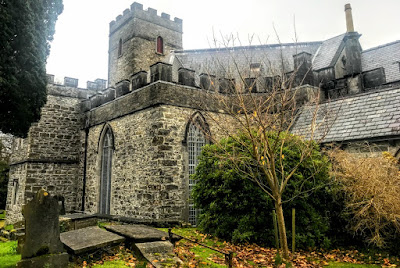 Saint John’s Church was remodelled in a Gothic style in the 19th century (Photograph: Patrick Comerford, 2019)

In subsequent building modifications in 1812 and 1883, the external appearance was substantially altered. The original Romanesque windows, with their round arches, were replaced, battlements and small towers were added, and the chancel was extended.

Some of the former Romanesque windows may still be seen in the west tower, but the church looks more like a fantasy Gothic castle. 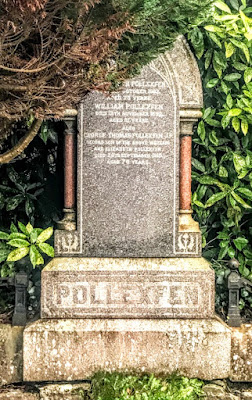 This was the parish church attended by William and Elizabeth Pollexfen, grandparents of the poet William Butler Yeats (1865-1939) and the painter Jack B Yeats (1871-1957). William Pollexfen was a well-known shipowner who also ran mills in Sligo and Ballisodare, and the family lived nearby in Merville.

Saint Mary’s Cathedral in the village of Elphin, south Co Roscommon, suffered severe storm damage in February 1957. A bill passed in the General Synod in 1958 moved the seat of Dioceses of Elphin and Ardagh to Saint John’s Church, Sligo, and the wrecked cathedral in Elphin was abandoned by the Church of Ireland in 1961.

Saint John’s Church, Sligo, became the Cathedral of Saint Mary the Virgin and Saint John the Baptist on 25 October 1961. The former choir stalls were removed to make way for a new bishop’s throne and chapter stalls, the only indication of the building’s status as a cathedral.

An exhibition board outlining the history of the connection between Saint John’s and Bram Stoker’s mother, Charlotte Thornley, and her family, was unveiled in the cathedral by Dacre Stoker, the great-nephew of Bram Stoker, last month [23 October]. 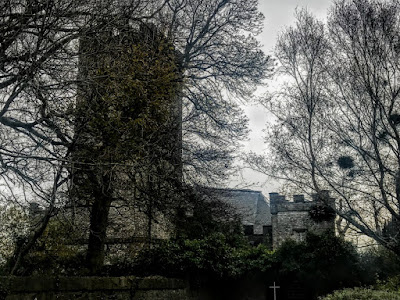 Saint John’s Cathedral seen from the grounds of its neighbour, the Roman Catholic Cathedral of the Immaculate Conception (Photograph: Patrick Comerford, 2019)