Back on the Pugin trail in
the FitzGeralds’ heartland 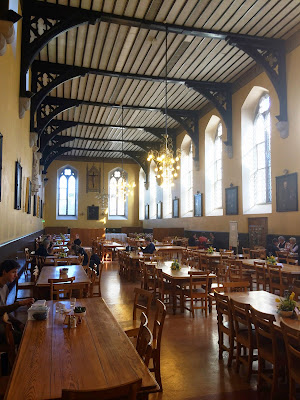 It has been a bright, sunny day all day, with warm sunlight streaming into my study all morning. I decided to finish work after an early lunch and to go to Maynooth where I have long wanted to photograph the Pugin Hall since its restoration.

Yes, I was back on the Pugin trail, after a brief rest from my exploration of AWN Pugin’s great legacy of gothic revival architecture. It is a project that has taken me to cathedrals, churches, chapels, convents and private houses throughout Ireland from Wexford and Waterford to Kerry and Limerick, Kildare and Dublin, and to a variety of places in England, including Cambridge, Oxford, London and Birmingham, and throughout Staffordshire. 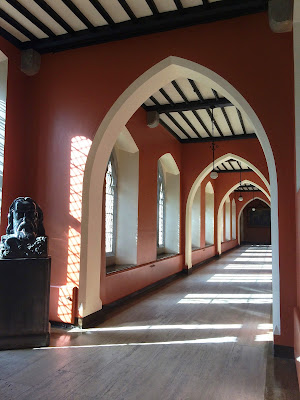 Pugin Hall now serves as the self-service canteen for staff and students of Maynooth University and is located in Saint Patrick’s House on the South Campus. But it was designed by Pugin as the refectory for Maynooth College and was built between 1845 and 1852.

It was restored in 1992 and is often said to be Pugin’s finest hall. 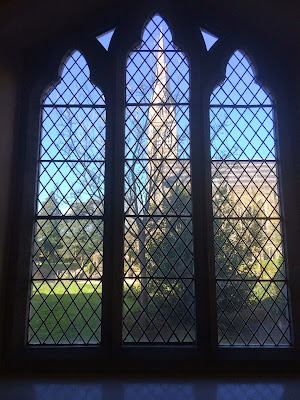 The Victorian corridors and squares of Maynooth, designed by Pugin and James Joseph McCarthy, equal any quad in Oxford or court in Cambridge.

Sadly, the main college chapel, completed by McCarthy, was locked this afternoon, and Maynooth Castle, once a bastion of the FitzGerald family, and Saint Mary’s Church, where many of the Earls of Kildare and Dukes of Leinster are buried, were both closed. 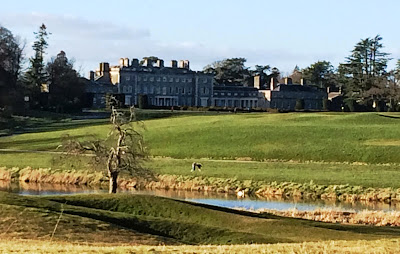 Carton House … one of the great houses of the FitzGerald family, Dukes of Leinster and Earls of Kildare (Photograph: Patrick Comerford, 2015)

On the eastern edges of Maynooth, we drove into Carton estate to visit Carton House, once the home of the Dukes of Leinster and one of the most elegant stately homes on these islands.

Queen Victoria knew Carton well, Grace Kelly and Prince Rainier spent a holiday there, and Peter Sellers and Marianne Faithfull lived there for years. The 1st Duke of Leinster chose it for his country seat in 1739, and it stayed in the FitzGerald family until the mid-20th century.

Carton House is the finest example in Ireland of a Georgian-created parkland landscape. Now it is luxury hotel standing in a walled estate of 4.5 sq km (1,100 acres), stretching across two counties, Kildare and Meath, with two world-class championship 18-hole golf courses, yet it is only 23 km from Dublin’s city centre and 30 minutes from Dublin Airport.

The lands at Carton were part of the Maynooth estate of the FitzGerald family from 1176. They became Earls of Kildare in 1315 and for almost 800 years were one of the most influential political families in Ireland.

The FitzGerald family were the virtual rulers of Ireland from 1477 until 1513 and the rebellion of “Silken” Thomas, who was executed in 1537 with his five uncles for rebellion. 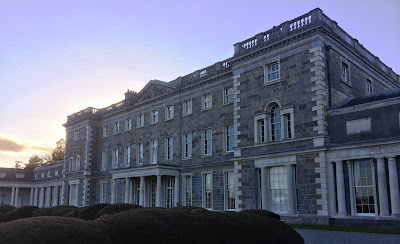 Carton House was designed by Richard Castles in the 1730s and remodelled by Richard Morrison a century later (Photograph: Patrick Comerford, 2015)

The first record of a house at Carton was in the 17th century when William Talbot, Recorder of Dublin, leased the lands from the 14th Earl of Kildare and is thought to have built a house. Richard Talbot, 1st Earl of Tyrconnell, is said to have built Tyrconnell Tower as his mausoleum. Its official name is The Prospect Tower.

After the defeat of the Jacobites at the Battle of the Boyne, the Talbot interests in the Carton estate were forfeited to the crown in 1691 and in 1703 sold to Major-General Richard Ingoldsby, Master General of the Ordnance.

In 1739, the lease was sold back to Robert FitzGerald, 19th Earl of Kildare, who employed Richard Castles (originally Cassels) to build the present Carton House. This was the same year the FitzGerald family bought Frescati House.

At the time, it cost £26,000 to build Carton House. Castles also designed some of the other great Irish houses, including Summerhill House, Co Meath, Westport House, Co Mayo, and Powerscourt House, Co Wicklow, and in 1745 he built Leinster House as the Dublin town house for the FitzGeralds.

In 1747, James FitzGerald, 20th Earl of Kildare (and from 1766 1st Duke of Leinster) married Lady Emily Lennox, daughter of the Duke of Richmond. She was a great-granddaughter of King Charles II and a sister of Lady Louisa Conolly of neighbouring Castletown House, near Celbridge. The story of the life and times of these two sisters has been told by Stella Tillyard in her book and BBC mini-series, The Aristocrats.

Lady Emily played an important role in the development of the house and estate as it is today. She designed the Chinese room, which would later be a bedroom for Queen Victoria, and decorated the Shell Cottage on the estate with a collection of shells from around the world.

Lady Emily was the mother of 23 children, including Lord Edward FitzGerald, one of the leaders of the1798 rebellion.

Carton remained unaltered until 1815, when the 3rd Duke of Leinster decided to sell Leinster House to the Royal Dublin Society and make Carton House his principal residence. Richard Morrison, who was commissioned to enlarge and remodel the house, moved the entrance to the house to the north side and replaced the curved colonnades with straight connecting links to obtain additional rooms, including the dining room. 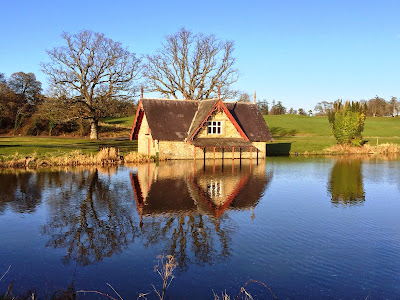 Queen Victoria stayed twice at Carton, and the lake was created especially for her before her second visit. The Boat House on the banks of the Rye River by the bridge on the drive up to Carton House, is said to have been built for her second visit. The FitzGeralds were told that Queen Victoria had a dream that she was rowing on the lake at Carton House. But Carton had no lake, and so the lake, the boathouse and a special boat were commissioned for her visit.

Carton remained in the FitzGerald family until the early 1920s when the future 7th Duke of Leinster sold his lifetime interest in the possible reversionary rights to a moneylender, Sir Harry Mallaby-Deeley to pay off gambling debts of £67,500.

At the time, Lord Edward FitzGerald was third in line to the family titles and did not expect to succeed. However, one brother had died in World War I, another died of a brain tumour, and when Edward succeeded in 1922, Carton was lost by the FitzGeralds.

In 1936, the Duke of Leinster testified at a bankruptcy hearing that he had travelled to the US in 1928 to find an heiress to marry. On his trip, he “entertained lavishly on borrowed money in efforts to find an American wife who would pay off his debts.” Although wo heiresses appeared to be interested, each woman turned down the opportunity to become the Duchess of Leinster. 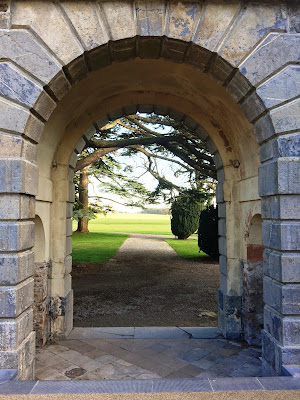 Looking out onto the parkland at Carton House from the courtyard (Photograph: Patrick Comerford, 2015)

Unable to repay his debts, the duke spent the final years of his life living in a small bedsit in Pimlico. He died by suicide in 1976 by taking an overdose of pentobarbital.

Gerald FitzGerald (1914-2004) was the only child of the7th Duke of Leinster and his first wife, May Juanita Etheridge, a chorus girl. His parents separated in 1922 and were divorced eight years later, the future duke spent most of his childhood with his great-aunt, Lady Adelaide FitzGerald, in Johnstown Castle, Co Wexford, before being sent to Eton.

He was a major in the 5th Royal Inniskilling Dragoon Guards during World War II, and was wounded during the Normandy landings. After the war, he tried to farm the family estate at Kilkea Castle, Co Kildare, but in the early 1960s he moved to Oxfordshire and worked in the aviation industry.

When his father died, he was prevented momentarily from using his title when a California artist, Leonard FitzGerald, claimed to be the son of his father’s elder brother, Lord Desmond FitzGerald, who died in 1916. Again, in 1999, he failed to prevent a half-brother being recognised by both Debrett’s Peerage and Burke’s Peerage. Adrian FitzGerald was the illegitimate son of the 7th Duke.

Today, the FitzGerald family titles are held by Maurice FitzGerald, a landscape artist who was born in 1948 and succeeded as 9th Duke of Leinster in 2004.

Meanwhile, Ronald Nall-Cain, 2nd Baron Brocket, who lived at Brocket Hall in Hertfordshire, bought Carton House in 1949. In 1977 his son, David Nall-Cain, who had moved to the Isle of Man, sold Carton House to the Mallaghan family.

The Irish government turned down opportunities to buy Carton House in the 1980s and again in the 1990s, and in 2000 Carton was redeveloped as a golf resort and hotel. 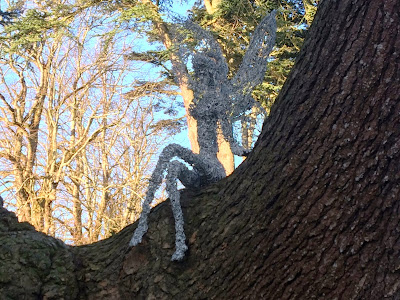 A fairy sculpture in a tree in the grounds of Carton House (Photograph: Patrick Comerford, 2015)

Posted by Patrick Comerford at 23:40

I found your writing on Carton House, Maynooth, particularly interesting but found a few discrepancies! You mentioned that Queen Victoria stayed at Carton TWICE - in fact this is not true. She NEVER stayed at Carton, in spite of what you might read! In 1849, she paid a 3 hour visit (arriving at 1pm) to this wonderful house of the Duke of Leinster and while the Chinese Bedroom was put aside, complete with tester bed, in case she might require a rest, she DIDN'T stay overnight. She left Carton at 4pm to return to the Viceregal Lodge in the Phoenix Park, Dublin where the royal party were staying. The story of the Lake being created for her, as 'depicted' in her dream is,I'm afraid, another Fairy-tale - a good story for tourists! lol. You will find mention of her visiting in 1897, or thereabouts, but we all know she did NOT visit Ireland that year - she came to these shores 4 times in all - 1849, 1853,1861 and 1900.I have researched this matter thoroughly from primary sources, including the newspapers of the time.

Thank you for taking the time to post this PTL.

It's good to separate truth from myth and to get the facts straightened out.