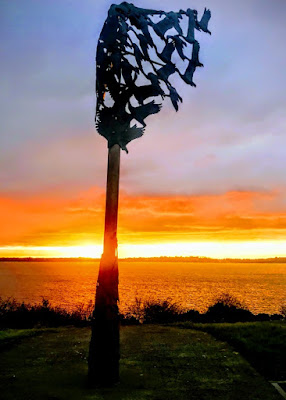 ‘The Children of Lir’ (1993) Linda Brunker on the shores of Lough Owel, near Mullingar, Co Westmeath (Photograph: Patrick Comerford, 2019)

On the way back from Sligo early last week, I stopped to see a number of lakeside and riverside sculptures that tell stories from Irish legends and history, including ‘The Gaelic Chieftain’ by Maurice Harron, near Boyle, Co Roscommon, and Will Fogarty’s sculpture of Saint Eidin in the Linear Park by the banks of the River Shannon in Carrick-on-Shannon.

Linda Brunker’s bronze sculpture, ‘The Children of Lir,’ overlooks Lough Owel, outside Mullingar, Co Westmeath. It was commissioned by Westmeath County Council in 1993.

She has received many public commissions through Ireland and in Brussels, London and the US, and her work is in private collections in Ireland, Europe, Japan and the US.

Her work has been recognised with numerous awards and presentation pieces.

She lived at Laguna Beach, California, and Melrose, West Hollywood, before moving to Toulouse some years ago. 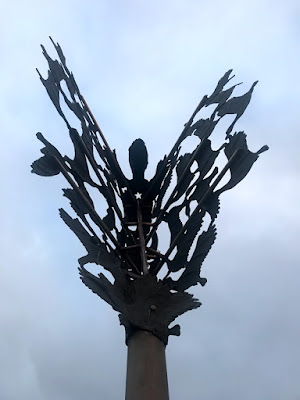 Lir was a chieftain of the Tuatha de Danann tribe. On the death of Daghda, their king, a convention of chiefs elected his son, Bodhbh Dearg (Bov the Red), to succeed him. This decision offended Lir who felt he had a greater claim to the kingship.

Shortly after, Lir’s wife died and in a gesture of friendship, Bodhbh Dearg, who had three beautiful foster-daughters, offered Lir the choice of his daughters as wife. Lir chose Aobh, the eldest who gave birth to four beautiful children: Fionnuala, Aodh, Fiachra, and Conn. Tragedy struck when Aobh died. Lir was heartbroken and he too would have died but for the great love he had for his children.

After a time Bodhbh Dearg offered Lir Aoife, the sister of Aobh, as his wife, and Lir and Aoife were married.

Lir’s four children were famous for their beauty and were beloved by all the Tuatha De Danann. At the beginning, Aoife looked after the children with a mother’s love but evil touched her heart and she became insanely jealous of Lir’s love for his children.

One morning, when Lir was away hunting, Aoife took the children out in her chariot to visit their grandfather Bodhbh Dearg. She stopped at Lough Derravaragh and led the children to the water to bathe. As soon as they were on the lake, she struck them with a magic wand and changed them into four beautiful swans, decreeing that they should spend 300 years on Lough Derravaragh, 300 years on the Sea of Moyle or the North Channel, and 300 years on the Bay of Erris, Co Mayo.

Aoife left them their speech and gave them the power of singing in a way surpassing all earthly music. Legend has it that for this crime Bodhbh Dearg punished Aoife by transforming her into an air demon.

Throughout their 300 years on Lough Derravaragh, great crowds frequently camped on the shore to listen to the singing of the swans. Later, on the Sea of Moyle, and finally, on the Bay of Erris, the four swan-children went through great sufferings.

During their final days on the Bay of Erris, they learnt of Saint Patrick, who had come to Ireland to spread the Christian faith. As Saint Caemhoch, one of Saint Patrick’s disciples prayed with them, their feathers fell away and they were restored to their human form. They were now three old feeble men and an old woman. Saint Caemhoch baptised them before they died. They were buried together in the one grave as they wished. 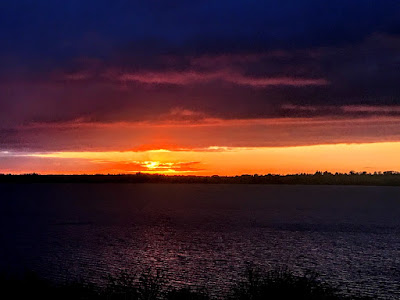 Beautiful write-up on the bronze sculpture by the Irish Sculptor Linda Brunker at Lough Owel, thank you! I'm currently writing an essay on the same subject and would like to add that the true name of this piece is 'Lake Angel'. Although the artist acknowledges the loose association with the Legend of the Children of Lir due to the location, the sculpture was designed to resemble a flock of geese, celebrating the female form. However, us locals have also claimed it as the Children of Lir... Thanks Again! Regina

Should it not be facing the other way? With the birds coming to land in the lake?