Saintly sculpture by
a riverside walk in
Carrick-on-Shannon 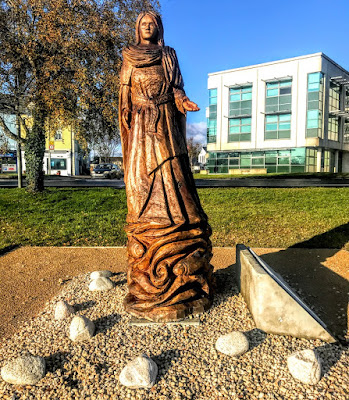 Will Fogarty’s sculpture of Saint Eidin in the Linear Park by the banks of the River Shannon in Carrick-on-Shannon (Photograph: Patrick Comerford, 2019)

On the way back from Sligo at the beginning of last week, two of us stopped in Carrick-on-Shannon, which straddles the River Shannon on the borders of Co Leitrim and Co Roscommon, to enjoy a riverside walk in the Linear Park.

There too I was pleased to see the beautiful sculpture of Saint Eidin, a local seventh century saint, by the West Limerick sculptor Will Fogarty of Fear na Coillte Chainsaw Sculptures.

Will Fogarty carved this new statue on the site and it was unveiled in August 2018.

Saint Eidin’s feast day is 5 July. She founded her convent on the shore of Lough Eidin, now known as Drumharlow Lake, just two miles from Carrick-on-Shannon. She died sometime before 700 AD.

She is the patron saint of Tumna parish and is buried in the ruins of a small church just north of Carrick-on-Shannon. Tuaim mná is mentioned in the Annals of the Four Masters, and the names means ‘the tomb of the woman.’

In 1834, 11 purse gold balls believed to date back to 800 BC, were dug up near her convent ruins. Nine of the gold balls are on display in the National Museum of Ireland. The 11 bright stones at the foot of the statue are reminders of this find and of the prayer stones found at her tomb at Tumna. Fish by the feet of Will Fogarty’s sculpture of Saint Eidin by the banks of the River Shannon in Carrick-on-Shannon (Photograph: Patrick Comerford, 2019)

Will Fogarty’s other sculptures include three sculptures in the Forge Park beside the river walk in Tarbert, Co Kerry. He was commissioned by the Tarbert Development Association in 2014 to work on the tall stumps of three trees that had to be shortened after the storms of the New Year in 2014. He cut two faces from fables into two of the stumps and the Salmon of Knowledge from the Fianna myth into the third stump.

Will Fogarty also calls himself Fear na Coillte, in reference both to the wood spirits in his work and to myself. He lives in the foothills of the Ballyhouras in Co Limerick, surrounded by mountains and forests, and spends time walking in them with Wag, his Labrador. 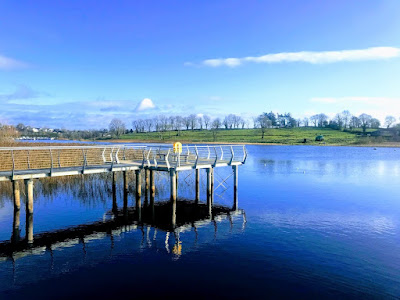 Walking by the River Shannon at the Linear Park in Carrick-on-Shannon (Photograph: Patrick Comerford, 2019)

Delightful photos and information re St Eidin Tumna / Drumharlow.
Sad to see damages to sculpture recently. Hope it will be protected. M.H.