There are no princesses at
Woking Palace today, and
no princes at Pizza Express 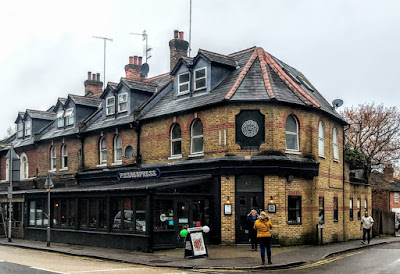 Pizza Express has become the most photographed premises in Woking (Photograph: Patrick Comerford, 2019)

Apart from having the most famous – or infamous – Pizza Express in England, Woking can boast it has the church with one of the oldest doors in England, along with the oldest purpose-built mosque in the country, and England’s first working crematorium.

This is a large town in north-west Surrey, on the south-west fringes of Greater London, about 24 minutes from Waterloo station. Woking town itself has a population of 62,796, but the total population is more than 105,000 in 2011.

Working claims to date back to the eighth century, when there was a monastery at a site known as Wochingas. It appears as Wochinges in the Domesday Book in 1086, when it was associated with Osbern FitzOsbern, Bishop of Exeter.

Woking Palace is a former manor house of the Royal Manor of Woking near Old Woking and dates back to 1272. The manor was acquired by royal grant in 1466 by Lady Margaret Beaufort, the mother of Henry VII, and her third of four husbands, Sir Henry Stafford.

Woking Manor House was converted into a palace by Henry VII in 1503 and was later remodelled by Henry VIII and Elizabeth I.

James I granted the estate to Sir Edward Zouch in 1620 who may well have allowed its remains to be plundered to build Hoe Bridge Place, his new mansion about a mile away. Zouch was one of the proprietors of the Plymouth Colony in America and the North Virginia Company.

Zouch was the keeper of Woking Park when he acquired Woking Palace in 1620 from a cash-strapped crown for an annual rent of £100 and the duty of serving the first dish to the king at a feast on Saint James’s Day. By the reign of Charles II (1660-1685), the palace appears to have been abandoned and virtually ruined.

Modern Woking grow up in the area to the south of the Basingstoke Canal when it opened in 1794, and it expanded rapidly after the railway lines from London to the south coast and the south-west reached here in 1838. As the town grew and expanded, Woking Crematorium at St John’s was established in 1878 and became Britain’s first crematorium. It was first tested on 17 March 1879, when the body of a horse was cremated.

Britain’s first purpose-built mosque, the Shah Jahan Mosque on Oriental Road, was built in 1889. It was commissioned by Shahjehan, Begum of Bhopal (1868-1901), one of the four female Muslim rulers of Bhopal between 1819 and 1926.

It has been described by the Pevsner Architectural Guides as ‘extraordinarily dignified.’ But perhaps I should say a little more in a posting later today about this mosque and the Irish peer who became one of its most famous members, and a little more about Lady Margaret Beaufort tomorrow.

Woking has elected Conservative MPs since the constituency was formed in 1950, and Jonathan Lord, who has been the MP since 2010, is standing for the Tories in Woking once again in next month’s general election.

Today there are no princes in Woking, Woking Palace lays in ruins, there is no sign at Pizza Express declaring ‘by appoint to HRH …’, and in this Tory heartland of Surrey I could see no signs that Britain is the middle of a deeply divisive election campaign. 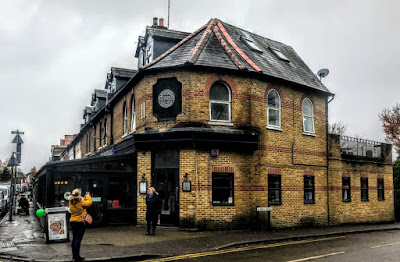 There are no commemorative plaques outside Pizza Express on Goldsworth Road in Woking (Photograph: Patrick Comerford, 2019)