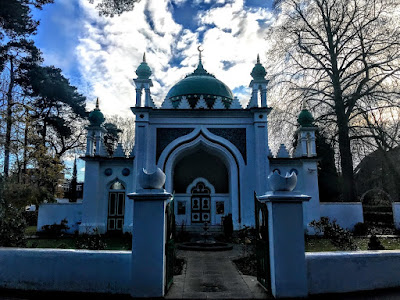 The Shah Jahan Mosque on Oriental Road, Woking … built in 1889, it is the first purpose-built mosque on these islands (Photograph: Patrick Comerford, 2019)

Back in the 1980s, there was an old joke among journalists that it was sure sign of folly to be the pretender to the throne of Albania; it was an even greater folly to go to Albania to claim that throne.

But did you ever hear of the Irish peer and engineer who lived in Woking, who went bankrupt almost a century ago and who was offered the throne of Albania, possibly on three occasions, in the 1920s?

Lord Headley was one of the most prominent early converts to Islam in England, generations before Muslims arrived in significant numbers from India and Pakistan, and was a leading member of the mosque in Woking.

The Shah Jahan Mosque on Oriental Road is a 10 or 15 minute walk from Saint Columba’s House, where I have been staying in Woking this week. It was built in 1889, and is now one of Woking’s great architectural treasures. But it is also known as Britain’s first purpose-built mosque.

The mosque was the inspiration of the orientalist Gottlieb Wilhelm Leitner (1840-1899). Leitner, who was born into a Jewish family in Budapest and died in Bonn, was a keen linguist and said to be fluent in 40 or 50 languages. At one time, he was prodigious interpreter for the British army during the Crimean War, reaching the rank of colonel at the age of 15.

He moved from Constantinople to London, and in the hope of becoming an Anglican priest and studied theology at King’s College, London. But he then then converted to Islam, and was instrumental in founding the University of Lahore and the Oriental College in Woking.

The mosque in Woking was built in the grounds of Leitner’s Oriental College, which gave its name to Oriental Road. It was funded mainly by Shahjehan, Begum of Bhopal (1868-1901), one of the four women to become the Muslim royal ruler of Bhopal between 1819 and 1926.

The mosque was designed by the architect William Isaac Chambers (1847-1924) in what was has been described as a ‘Persian-Saracenic Revival’ style and is built in Bath and Bargate stone. It has a dome, minarets, and a courtyard, and was described by the Pevsner Architectural Guides as ‘extraordinarily dignified.’

A prominent early members of the mosque in Woking was the Irish peer Rowland George Allanson Allanson-Winn (1855-1935), 5th Baron Headley, who was an early convert to Islam.

The title of Lord Headley, Baron Allanson and Winn, of Aghadoe in Co Kerry, dates back to 1797, when it was given to Sir George Allanson-Winn, a former Baron of the Court of the Exchequer and MP for Ripon, who married into the Blennerhassett family in Co Kerry. The third Lord Headley sat in the House of Lords as an Irish Representative Peer in 1868-1877, as did his son, the fourth Lord Headley (1883-1913). He was succeeded by his cousin, Rowland Allanson-Winn, as 5th Baron Headley.

Lord Headley was an Irish peer, took his title from Aghadoe, near Killarney, Co Kerry, and was once a Justice of the Peace for Co Kerry. He was born in London, and was educated at Westminster School and Trinity College Cambridge. He studied for the Bar at the Middle Temple, them switched to engineering and became a civil engineer.

For many years after qualifying as an engineer, he was engaged in foreshore protection work in Ireland and used the low groyne system and extending these groynes into deep water by means of chains, cables and concrete blocks. He superintended coastal defence works at Youghal, Co Cork, and Glenbeigh, Co Kerry, and carried out similar work on the coast to the north of Bray Harbour, Co Wicklow. He stood as the Conservative and Unionist candidate in South Kerry in 1892, but received only 86 votes. Later, from 1896, he worked on building roads in India, and in 1902 and 1903 he won the Silver Medals of the Institute of Civil Engineers of Ireland.

In 1906, the Arklow Harbour Commissioners appointed him the chief engineer for extending the south breakwater of the harbour, but his plans were abandoned the following year in favour of a different scheme proposed by John Purser Griffith.

He inherited his Irish peerage when his cousin Charles died in 1913, and with the title inherited the family estates in Co Kerry. His homes in Ireland were at Inseidin, Coliemore Road, Dalkey, and Glenbeigh, Killarney. In the year he inherited his family titles and estates in Ireland, he also converted to Islam on 16 November 1913, and adopted the Muslim name Shaikh Rahmatullah al-Farooq. He set up the British Muslim Society in 1914, was the author of several books on Islam, and twice made the Hajj to Mecca.

Albania became, at least nominally, a parliamentary democracy in 1924. But President Ahmed Bey Zogu proclaimed himself King of the Albanians as Zog I in 1928, and tried to establish a constitutional monarchy.

When Fascist Italy invaded Albania in 1939, Zog fled the country, and King Vittorio Emanuele of Italy was proclaimed the new King. After the collapse of Ever Hoxha’s regime, Zog’s son, Crown Prince Leka (1939-2011), was the pretender to the Albanian throne until he died in 2011.

Meanwhile, Lord Headley died on 22 June 1935, and was buried in Brookwood Cemetery, near Woking. The reportof his funeral in The Times noted that his cousin, the Revd WN Manning, ‘was unavoidably prevented from being present.’ The Headley title became extinct when his younger son, Charles Allanson-Winn (1902-1994), died in 1994. 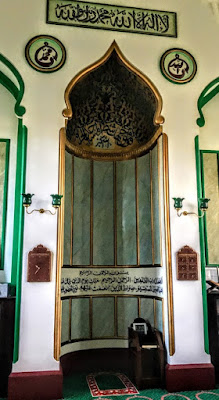