Bratislava: a new city in a new country
with a culture that is centuries old

Symbols of Slovakia in a souvenir shop in Bratislava … do you know your Slovakia from your Slovenia? (Photographs: Patrick Comerford)

It was my first-ever visit to Bratislava, and my first time to visit Slovakia.

Some months earlier, I had visited Gorizia or Gorica, a city straddling the borders of Italy and Slovenia. But I found myself wondering how many people know their Slovakia from their Slovenia. Bratislava Castle towers above the city and the banks of the River Danube (Photographs: Patrick Comerford)

Although Bratislava is centuries old, it has only been known by its present name for the past 100 years. Until 1919, it was mostly known in English by its German name, Pressburg, and sometimes by its Hungarian name, Pozsony.

The new name caused confusion a century ago, because Wrocław, now in west Poland, was long known in German as Breslau, in Czech as Vratislav and in Latin as Vratislavia, as its political status shifted between Poland, Bohemia, Hungary, the Austro-Hungarian empire, Prussia, Germany and Poland again.

Journalists were confused in 2018 when the Prime Ministers of Slovenia and Slovakia resigned in the same week. But the confusion between Slovakia and Slovenia has existed since the 1990s, when they became two of the newest countries in Europe. 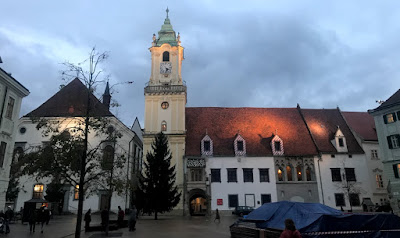 Slovakia and Slovenia have similar names, similar flags, and a similar history. Slovakia calls itself Slovenská Republika, while Slovenia is Republika Slovenija. One language is known to its speakers as Slovenčina, the other as Slovenščina, a letter rather than a word or a world of difference. To their residents, these countries are known as Slovensko and Slovenija; and among those residents, Slovenka in Slovak means a Slovak woman; Slovenka in Slovene means a Slovene woman.

The flags of these two countries are almost identical, with white, blue and red horizontal stripes and an heraldic shield displaying mountain peaks. The wrong flag is often flown at diplomatic gatherings, and the wrong anthem is often heard at sporting fixtures. 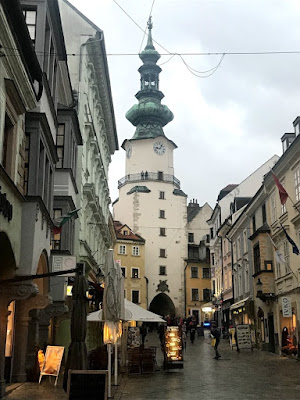 A city of culture

As an important cultural city in the Austro-Hungarian Empire, Bratislava attracted the great composers of the day, including Mozart, Beethoven, Liszt, Brahms and Rubinstein.

Today, the attractions of Bratislava include Saint Martin’s Cathedral, the Gothic churches, the palaces, castles and museums. With its antiquarian bookshops, street sculptures, squares, cafés and riverside walks along the banks of the Danube, Bratislava is a charming European capital, growing in popularity as a city-break destination.

There is archaeological evidence of Celtic settlements in the third century BC, and early Roman settlements too.

Bratislava has more than 50 churches, cathedrals, chapels and places of worship, including Saint Martin’s Cathedral. After Bratislava Castle, it is the second most visited place in the city.

The cathedral stands beneath the slopes of Bratislava Castle at the west edge of the old city centre, and its 85-metre spire dominates the skyline of the old town. Saint Martin’s Cathedral is the largest and one of the oldest churches in Bratislava, and it was the coronation church of the Kings of Hungary from 1563 to 1830. 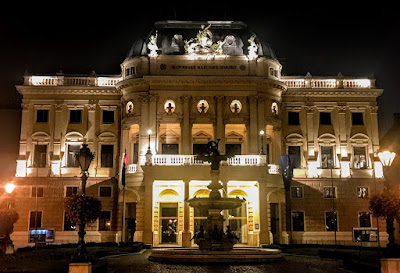 Long before the cathedral was built, the site had been the crossroads in the old town centre, with a market and perhaps also a chapel. At the time, the main centre of worship was a chapel in the castle that was rebuilt in the eight century and replaced in 1221 by a second dedicated to the Saviour. 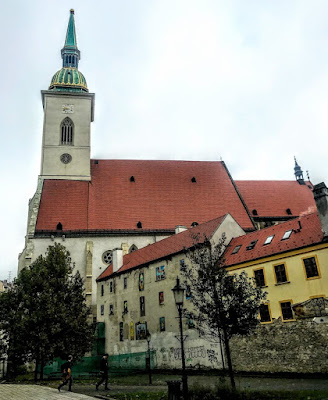 The old church could not meet the needs of a growing city, and a new, three-nave, Gothic cathedral was built in 1311 as part of the city walls, with its tower serving as a defensive bastion in the mediaeval fortifications.

Because of the geography of the site, a lack of funding and the Hussite Wars in the early 15th century, the cathedral was not completed until in 1452. 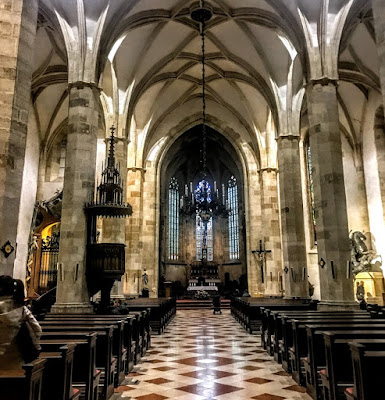 Inside Saint Martin’s … the cathedral was completed in 1452 (Photographs: Patrick Comerford)

For two or three centuries, from 1563 to 1830, Saint Martin’s was the coronation church for the Habsburg emperors as Kings of Hungary, after the Ottoman Turks captured Székesfehérvár. The Crown of Saint Stephen was placed on the head of Maximilian II, son of Emperor Ferdinand I of Habsburg, on 8 September 1563.

In all, 11 Habsburg kings and queens and eight of their consorts were crowned here, including the Empress Maria Theresa of Austria. This role is marked to this day by the 300 kg gilded replica of the Hungarian royal crown perched on top of the 85-metre tower. It weighs 150 kg, is over 1 m in diameter, and rests on a 1.2 m × 1.2 m gold-plated pillow and stands 1.64 m high. The pillow and crown contain a total of 8 kg of gold. 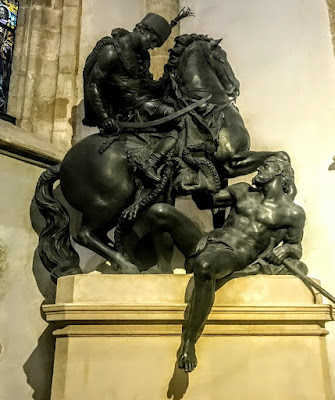 The statue of Saint Martin depicts him as a typical Hungarian hussar (Photographs: Patrick Comerford)

The first monumental work of central European sculpture made from lead can be found inside the cathedral. It depicts Saint Martin as a typical Hungarian hussar mounted on his horse, bending to a beggar and cutting his coat to share it with a poor beggar to protect him from the cold.

The catacombs and crypts beneath the cathedral contain the sepulchres of many significant historical figures, including Jozef Ignác Bajza, author of the first Slovak novel.

The cathedral and the neighbouring diocesan seminary are surrounded by cobbled side-streets, courtyards and steep steps. But the structure is threatened by the vibrations caused by heavy traffic on the access ramp to the nearby Nový Most bridge, known popularly as the ‘UFO bridge’. 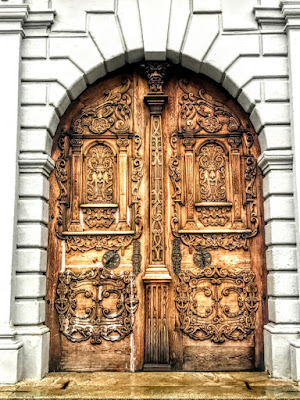 The intricate and handsome door of the Jesuit Church beside the Old Town Hall (Photographs: Patrick Comerford)

I was staying in the old city off Františkánska Street, originally a street leading up to Bratislava Castle. The Franciscan Church, dating from the 13th century, is the oldest surviving religious building in the Old Town. It is said it was built by King Ladislaus IV of Hungary after his victory over King Ottokar II of Bohemia in 1278, and it was dedicated by King Andrew III of Hungary in 1297. In this church, the Holy Roman Emperor Ferdinand I was elected King of Hungary in 1526. 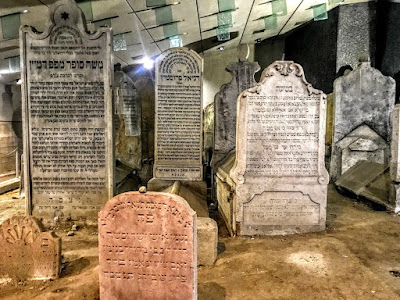 The Chatam Sofer Memorial and the grave of Bratislava’s most revered rabbi (Photographs: Patrick Comerford) 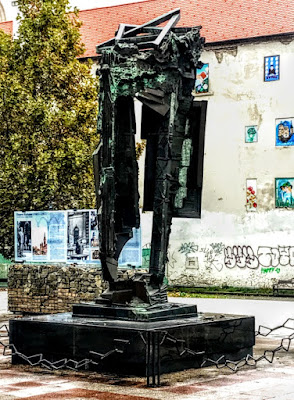 For centuries, Bratislava was an important centre of Jewish life. A royal decree in 1229 granted the Jewish minority equal rights. Several hundred Jews were living in Bratislava in the 14th century, with a synagogue, a cemetery, a mikveh and other public Jewish institutions.

In the first half of the 15th century, Jews were forced to live in a Jewish ghetto on Židovská Street (Jewish Street), known as Judengasse, beneath the castle. They were expelled and returned several times. 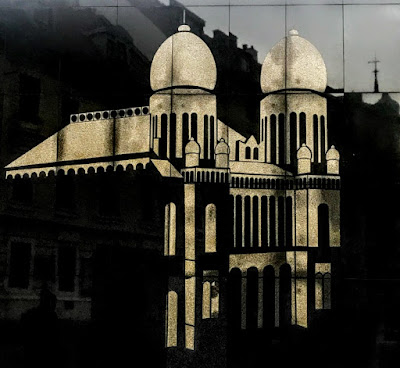 Beside a tunnel that runs under the castle, the Chatam Sofer Memorial commemorates the city’s most famous Jewish scholar, Rabbi Moses Sefer (1762-1839), also known as Chatam Sofer. Limerick’s last rabbi, Simon Gewurtz (1887-1944), was from Bratislava.

When the Slovak State was formed in March 1939, the pro-Nazi regime imposed discriminatory measures against the Jewish population. More than 15,000 Jews were living in Bratislava in 1940. The deportation of Jews from Slovakia began on 25 March 1942. German forces occupied Bratislava in September 1944 and most of the remaining 2,000 Jews in the city were sent to Auschwitz. 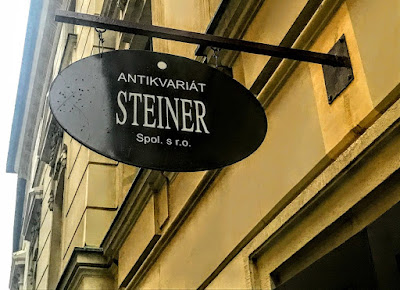 About 3,500 Jews from Bratislava survived World War II. Of the 30,000 Jews who remained in Slovakia, 90% emigrated in the following months and years, and the former Jewish district in Bratislava came to an end when the ‘UFO’ bridge was built in the 1960s. The Heydukova Street Synagogue is the last surviving synagogue in Bratslava.

The Holocaust Memorial on Rybné Square, beneath Saint Martin’s Cathedral, was erected in 1996 to commemorate the 105,000 Slovak Jewish victims of the Holocaust and the ‘Neolog’ synagogue that once stood in this square.

Čumil ‘the watcher’ or the ‘Man at Work’ is hardly bothered by his daily tasks (Photographs: Patrick Comerford)

If Bratislava’s castle and cathedral are its most visited sites, then its most photographed treasures are the sculptures and statues throughout the Old Town.

They include statues of people who pop up on street corners or behind park benches. Among them are poets, playing children, playful workers and Hans Christian Andersen, the children’s storyteller, who visited Bratislava in 1846.

Čumil ‘the watcher’ or the ‘Man at Work’ is the work of Viktor Hulik and seems to be climbing out of a hole at the corner of Rybárska Street and Panská Street. One rumour says he is a typical communist-era worker who is hardly bothered about his daily work. He has been loitering on this street corner since 1997.

‘Schone Naci’ or ‘Handsome Ignatius’ greets people on the corner of Sedlárska Street. Unlike other statues cast in bronze, this statue by Juraj Melis is the only one in the old town that is in silver.

The statue is named after Ignác Lamár, who lived in Pressburg, the former name of Bratislava, at the turn of the 19th and 20th centuries. Although he appears handsome and jolly, one story says his fiancée was deported to a Nazi concentration camp during the Holocaust and never returned. He never recovered psychologically from the trauma and spent his remaining days wandering the streets in a top hat and tails, smiling at everyone. 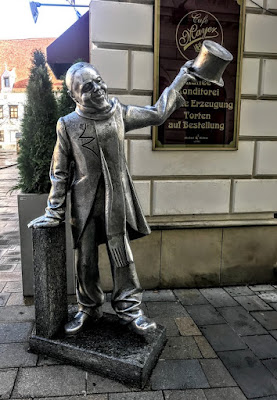 I wonder whether Donald Trump is ever confused. Melania Trump was born in Slovenia, while Ivana Trump was born in what was then Czechoslovakia. There is more than a wall that separates the two; indeed, they are separated by a whole country, Hungary.

Certainly, by the end of my visit to Bratislava, I could no longer understand how anyone could confuse Slovakia and Slovenia. 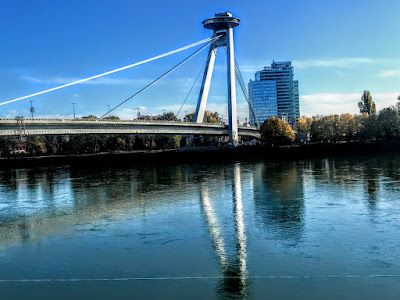