In search of Comerford
family links between
Cork and Lisbon 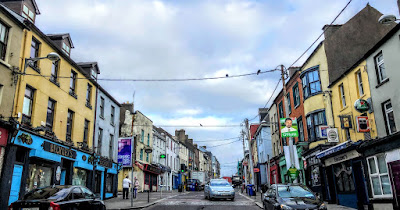 I am in Cork since yesterday, staying overnight in the WatersEdge Hotel in Cobh. This visit has given me an opportunity for first-time visits to the Roman Catholic Cathedrals in both Cork and Cobh, some more churches, and the sites of three or four former synagogues in Cork City.

For a long time, I have been keeping an up-to-date file on my Comerford Genealogy blog a page one branch of the Comerford family in Cork, who were wine and grain merchants in the late 18th and early 19th centuries.

This branch of the family came from Wexford originally, and they had many interesting family connections, including marriages with members of the Hennessy family of Cognac fame, and the Comerford Casey family and Comerford Hawkins, whose descendants included a Vicar of Saint Bride’s Church on Fleet Street, London, and Anthony Hope Hawkins, author of the swashbuckling novel, The Prisoner of Zenda.

The development of the Butter Market in Cork in the 18th century led to the foundation of the Committee of Butter Merchants, and this growing trade resulted in Mallow Lane being developed as Shandon Street and becoming an important international trading centre and a focal point in the city.

However, there was a visible diversity in standards of living in the area, with wealthy retailers living directly on the street, and many tenement halls on the numerous adjoining streets.

I recently came across a 250-year-old newspaper report from 30 July 1770, that reported how an accidental fire broke out the previous morning out in the bake-house and stores of Peter Comerford of Mallow Lane. His premises ‘were consumed, together with a large quantity of wheat and flour.’

The report continues sadly: ‘To aggravate the misfortune of this unhappy family, (whose loss barely by this fire is £250), the house was on Friday night broke open and robbed of plate and other articles. By this misfortune a family in decency and credit, is in three days time reduced to very indigent circumstances.’ 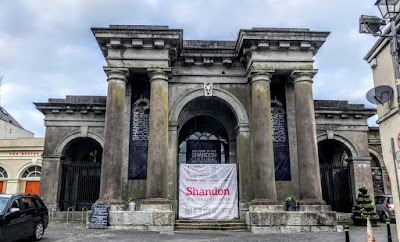 The Buuter Market near Shandon Church in Cork … its development in the 18th century and a growing trade resulted in Mallow Lane being developed as Shandon Street (Photograph: Patrick Comerford, 2020)

Then, an exchange of correspondence over the past few days with Rachel Pereira made me wonder whether this was the same Peter Comerford, an Anglican, who ended up in Lisbon within a few years, living in the Portuguese capital with his wife Winifred and their two daughters, Mary and Elizabeth.

Together, Rachel and I have drafted a family tree, built on her researches in parish records in Lisbon. They show how these two Cork-born Comerford daughters were baptised into the Roman Catholic church as adults in 1776 – at the time, there was no ecumenical recognition of baptisms – and how they married into prosperous Italian families that had moved to Lisbon around the same time.

Their descendants moved across Europe, and some moved to Brazil and on to the United States. It could be exciting to complete the family tree for this family, which is beginning to look something like this:

Peter Comerford of Cork and Winifred Dixon, known in Lisbon as Bonefacia or Bonifacia Dixan (Dixon or Dickson) were the parents of:

1, Maria Comerford, baptised as an adult on 26 May 1776, in the Parish Church of Sao Pedro de Alcantara, Lisbon. She married Pedro António Barata, on 29 October 1778. He was the son of Marco Antonio Barata and Anna Christina Barata, and was baptised in the parish Church of Santa Euzebio in Turin, Italy. Later, he was one of only three makers of fans in Lisbon, and one of the official fan makers of the Queen of Portugal.

Although some of their children continued to live in Portugal, Isabel and Giuseppe (Jose) later moved to Rio de Janeiro in Brazil and died there. Isabel died in Petrópolis, Rio de Janeiro, in 1862.

They were the parents of 10 children, including:

The parish records in Lisbon note that Peter and Winfred Comerford, as Pedro Commefort and Winefreda Bonifacia Dixon, were both Protestants from Cork. Either Peter and Winifred or their daughters were godparents at the baptisms of Nuno da Silva Telles, the Count of Aveiras and of the Countess of Ribeira Grande.

The next step is to identify which of the Peter Comerfords in Cork this Peter Comerford is and to identify his wife Winifred. I have yet to track down their marriage in Cork, and the original baptisms and Mary and Elizabeth in the Church of Ireland.

So, another branch on the very large and spreading family tree brings forth new shoots. 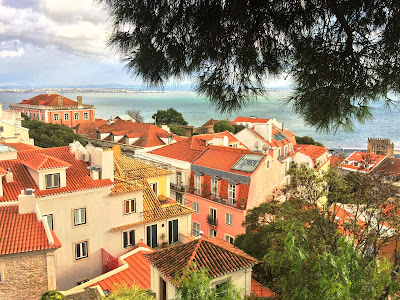 Looking across Lisbon from the ramparts of the Castle of São Jorge (Photograph: Patrick Comerford)