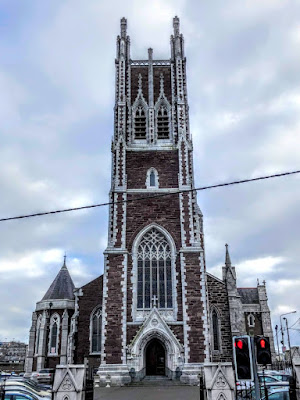 The ‘North Cathedral’ at the top of Shandon Street, Cork … the Roman Catholic cathedral of the Diocese of Cork and Ross (Photograph: Patrick Comerford, 2020)

The cathedral is at the top of Shandon Street and close to Saint Anne’s, the Church of Ireland parish church known for its bells.

The cathedral parish includes the areas of Blarney Street, Shandon and parts of Blackpool, and the baptismal records date from 1731. 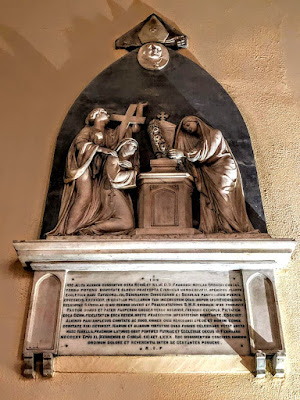 The cathedral was built when Francis Moylan was Bishop of Cork and Ross at the turn of the 18th and 19th centuries. Building work began in 1799 on the site of a former church built in the 1730s. The cathedral was dedicated on 22 August 1808 by Archbishop Thomas Bray of Cashel. In his sermon, the coadjutor bishop, Florence McCarthy, spoke of the necessity of social worship, and referred to reason, scripture, and tradition.

Bishop McCarthy died of typhoid in 1810, contracted while he was visiting a sick parishioner.

The early cathedral was extensively damaged by fire in act of arson in 1820, and only the shell of the building remained. 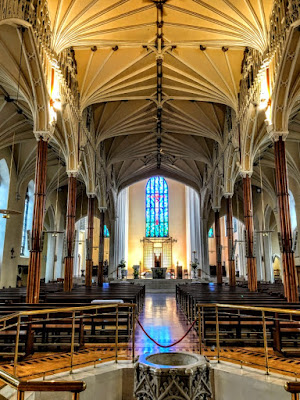 George Richard Pain and his elder brother James Pain (1779-1877), who was instrumental in introducing the Gothic Revival to Limerick and the surrounding counties, were both pupils of the great Regency architect John Nash (1752-1835).

Pain extended the cathedral by enlarging the sanctuary and creating a chancel arch, and the cathedral reopened in 1828. The cathedral is designed in early Neo-Gothic Revivalist style, and combines sandstone with limestone dressings. 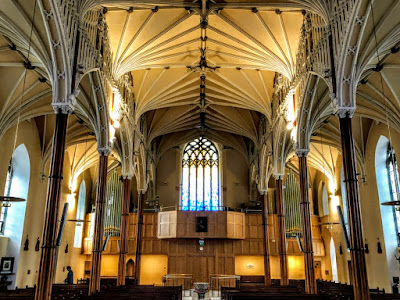 Bishop Murphy also commissioned John Hogan, then an apprentice sculptor, to execute the reredos behind the High Altar. It included 27 statues, carved in pine, of apostles and saints. These are now positioned in decorative plasterwork over the nave. 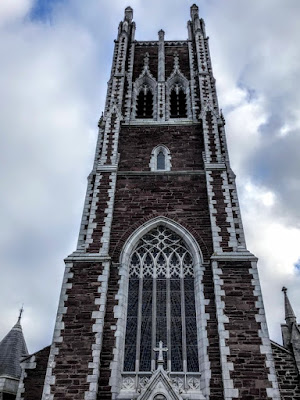 The West Tower, over the main door, was the vision of by Canon Daniel Foley in the 1860s and was designed by Sir John Benson, who also designed the Great West Door.

The architect Sir John Benson (1812-1874) was born in Collooney, Co Sligo. At the age of 21, he was sent by Edward Joshua Cooper of Markree Castle, to ‘a technical school in Dublin,’ presumably the Royal Dublin Society's School of Architectural Drawing. His early work included the restoration of Markree Castle, Collooney.

Benson worked as Cork county surveyor and was involved in the relief work during the famine in 1847. In 1848 he was appointed of consulting engineer to the Cork Harbour Board and improved the navigation of the river. He was the architect for the 1852 Irish Industrial Exhibition and won the competition to design the Exhibition Building for the Great Industrial Exhibition (1853) in Dublin. He was knighted for his work at the 1853 exhibition.

He was engineer and architect for the Cork and Macroom Direct Railway and the Rathkeale and Newcastle Railway. He also supervised the refurbishment of the Theatre Royal, Cork in the 1860s.

The tower of Saint Anne’s, Shandon, seen from the west door of the cathedral (Photograph: Patrick Comerford, 2020)

Benson’s other works in Cork include the Firkin Crane building (1855), a unique rotunda that formed part of the original Butter Exchange and now houses the Butter Museum; the Athenaeum or Opera House (1855); and Saint Patrick's Bridge (1861).

Benson’s tower at the cathedral, added in 1869, is 152 ft high, 10 ft higher than the steeple of nearby Saint Anne’s Church, Shandon. 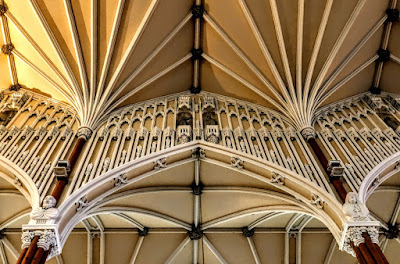 The original altar was fashioned in wood by Italian craftsmen in Lisbon. The bells were cast in 1870 by John Murphy of Dublin, and were originally hung for change-ringing. However, they are now considered ‘unringable.’

Ideas and plans for extending and renovating the cathedral were discussed as far back as 1931 in an annual blotter book published by the cathedral parish office while Daniel Cohalan was bishop.

By the 1960s, Bishop Cornelius Lucey wanted to fulfil the dream of Bishop Francis Moylan’s dream to complete the cathedral.

The architects employed were Boyd Barrett and Associates were commissioned as architects, the sanctuary was extended, a sanctuary tower added, and the internal layout reorganised.

These works in 1964-1968 included a 70 ft extension to the cathedral, a new Sanctuary Tower (80 ft) was built to compliment the West Tower, and the sanctuary was rearranged. 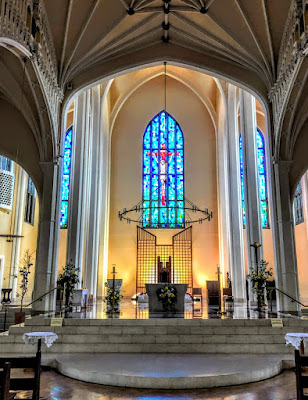 Richard Hurley’s vision drew the sanctuary into the body of the cathedral and gathers the people around three sides of the altar (Photograph: Patrick Comerford, 2020)

However, despite this work, the Neo-Gothic originals and the later extensions lacked harmony until the reordering and renovation carried out in 1994-1996. Through the vision of the architect Richard Hurley, the tower and sanctuary were renovated and refurbished, the high altar, altar rails and side altars were removed, and the Sanctuary was drawn into the body of the cathedral so that it gathers the people around three sides of the altar.

The entire fabric of the building was repaired and restored, the roof was re-slated, the Gothic ceiling was repaired, and the external stonework was repointed. The final public function of the late Bishop Michael Murphy was to rededicate the cathedral on Saint Michael’s Day, 29 September 1996; he died in October 1996.

The cathedral celebrated its bicentenary in September 2008. A visitor centre was established underneath the sanctuary of the cathedral in 2017, with tours of the Cork Folklore Project’s exhibition and work. 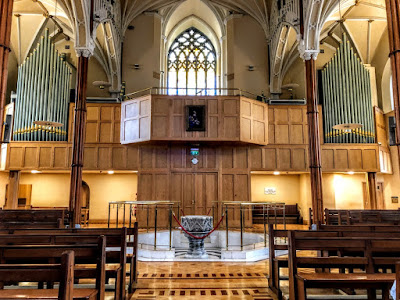 The baptismal font at the west door of the cathedral (Photograph: Patrick Comerford, 2020)