The restoration of Coole House,
a former Crowley home in Millstreet 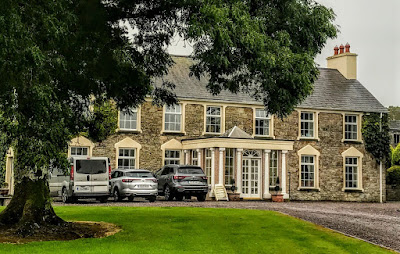 While I was visiting many places associated with my grandparents’ families in Millstreet, Co Cork – including the mill that gave Millstreet its name, the graveyard at Drishane Castle, my grandparents’ home, shop and pub on the Square, my great-grandparents’ house and pub on the Main Street, and the shop and house where an uncle, aunt and cousins had lived and worked – I was also brought to visit Coole House, one of the main houses associated with my grandmother’s branch of the Crowley family.

Coole House is in Coolmore, on the south side of L1120, about 3 km north-east of Millstreet, just east of Drishane Castle and a short walk north to the banks of the River Blackwater.

Later, Coole House was the residence of Herbert Baldwin O’Donnell (1783-1856), the land agent of Captain Henry Wallis of Drishane Castle, one of the principal land owners in the Millstreet area.

Herbert O’Donnell’s father, John O’Donnell of Egmont, was a barrister. Egmont is about 27 km north-east of Millstreet, in an area that was also home to the Perceval family, Earls of Egmont.

Herbert O’Donnell was born in 1783. By 1837, he was living at Coole House, according to Samuel Lewis’s Topographical Dictionary of Ireland. As well as being the land agent of the Wallis family of Drishane Castle, he was also a Justice of the Peace for Co Cork, farmed 300 acres.

For about 15 years, he was also a churchwarden at Saint Anna’s Church, Millstreet. In the mid-1840s, he gave evidence to the Devon Commission on the land issue and put forward recommendations for its solution.

Herbert O’Donnell died on 2 September 1856 at the age of 73 and his wife Sarah died in 1860 at the age of 69. They are buried in the graveyard beside Drishane Castle.

Their eldest son, John O’Donnell, married Mary Jane Cantrell in Guernsey in 1844. They returned to live in Millstreet, and he died on 16 March 1860 aged 47. John, Mary and their 15-year-old son, also John, are buried with John’s parents in Drishane.

The second son, Herbert Eyre O’Donnell, was born in 1818. He trained at the King’s Inns in Dublin and was called to the bar in 1836, later practicing as a barrister in Co Cork and Dublin. Herbert married Anastasia Constantina Woollett, the daughter of a London coal merchant, in Cobh, Co Cork in 1845.

They emigrated to Victoria, Australia, on the Queen of the Mersey in 1866 with their so Herbert O’Donnell, then aged 18. In the early 1870s, he was practicing as a solicitor in Wangaratta. and in 1871 he applied to be admitted to the Queensland Bar. Herbert Eyre O’Donnell returned home soon after and died in Cork on 3 February 1873.

The youngest son, Nicholas Michael O’Donnell, inherited Coole House from his father in 1856. He was active in community life in Millstreet and in 1862 he was Vice-Chairman of the Board of Guardians for the Millstreet Union, the equivalent of the local council.

In 1864, Nicholas bought the mill in Millstreet that gave its name to Millstreet and that was later bought by my great-uncle, Andrew O’Regan, a brother-in-law of my grandmother, Maria (Crowley) Murphy.

A year later after he bought the mill, Nicholas O’Donnell married Jane Chesney in Blarney on 26 February 1865. Jane Chesney was a daughter of General Francis Rawdon Chesney (1789-1872).

General Chesney was from Annalong, Co Down, and is remembered for exploring the Euphrates Valley to the Persian Gulf, his accounts of Constantinople, Syria and Egypt, and his report in 1830 on the feasibility of opening a Suez Canal as an alternative to the overland trade route to India and the sea route around the Cape. His report inspired the French diplomat Ferdinand de Lesseps who developed the canal. When the Suez Canal opened in 1869, linking the Mediterranean and the Red Sea, Lesseps greeted Chesney in Paris as the ‘father’ of the canal.

Later, in 1884, as head of the Franco-American Union, Ferdinand de Lesseps formally presented the statue to the United States, saying, ‘let us hope that it will add, by its moral value, to the memories and sympathies that it is intended to perpetuate.’

Meanwhile, the mill in Millstreet seems to have ruined Nicholas O’Donnell financially. In 1870, a year after Suez Canal opened, Nicholas O’Donnell, describing himself as a miller, filed for bankruptcy. He died before 1876, but his wife continued to live at Coole House until she died at Coolemore on 3 July 1903 at the age of 79. She is buried in the old churchyard beside Saint Patrick’s Roman Catholic Church in Millstreet.

Mary McCarthy (1839-1920), nee Bingham, who was born in Kilkeel, Co Down, is said to have inherited Coole House in Millstreet, from her employer Jane O’Donnell. 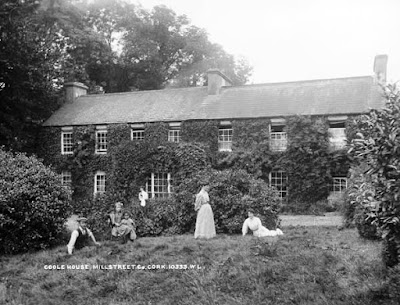 Coole House, with the Perry family, in 1910 (Photograph: The Larence Collection/National Library of Ireland)

But by 1910, when Coole House was photographed for the William Lawrence Collection, the house was owned by the Perry family. The photographs show Coole House as a long, two-storey Georgian house, with a seven-bay front.

Sarah (Perry) Malcolm is standing by a window in the centre of the old black and white photograph of Coole House. Lying to the right is Sarah’s sister, Mary (‘Minnie’) Louisa (Perry) McCulla, to the left is Harry Perry, who has been mistaken for the gardener in some comments on the photograph; above him on the knee of a maidservant is Sarah’s child, Ernest Ray Malcolm; and another, unidentified woman is in the background.

Sarah Perry had emigrated to America, where she married, and then moved to Vancouver in Canada. She had returned in Millstreet when the photograph was taken. Ernest Sarah is by the window, and her. Ernest Malcolm later returned in 1990 and visited Millstreet Museum.

Some years after the photograph was taken, Coole House was bought by one of my great-uncles, Cornelius Denis Crowley (1879-1972), a brother of my grandmother, Maria (Crowley) Murphy (1882-1957) of Millstreet, Co Cork.

For many years, Con Crowley was a director of the Roscrea Meat Company with his brother Jeremiah D Crowley of Wallstown Castle, Castletownroche, Co Cork – the other directors included Robert Briscoe TD and G Fasenfeld.

Con Crowley was anxious to be remembered in Millstreet, and in 1944 he erected two windows as memorials to his parents, Denis and Maria Crowley, in Saint Patrick’s Church, Millstreet. The inscription at the foot of the Oliver Plunket window reads: ‘Erected to the memory of Denis and Margaret Crowley of Millstreet by their son Cornelius. 1944.’

After World War II, Con Crowley also lived at of Finnstown House, Lucan, Co Dublin. The Crowley family continued to own Coole House, but it by the 1960s it was derelict, and my cousins in Millstreet remember climbing into the house to play in it and wander through it. The describe its marble floors and its fading elegance.

When Con Crowley died in 1972 he was buried in Millstreet in the graveyard beside Drishane Castle, alongside his wife Hannah, who died in 1969. Coole House remained vacant for many years and was derelict by the early 1990s, when it was bought by the Duggan family, who carried out extensive renovations. The Duggan family bought Drishane Castle about the same time, and have been active in attracting major international equestrian events and the Eurovision Song Contest to Millstreet.

Today, Coole House is owned by Martina Hickey (née Duggan) and her husband. They have completely refurbished the house, so that it is once again an attractive country house and a family home.

The grave of Cornelius and Hannah Crowley in Drishane, with the grave of my grandmother and great-grandparents in the background (Photograph: Patrick Comerford, 2017)