The synagogues of Cork: 1,
a lost Sephardic synagogue 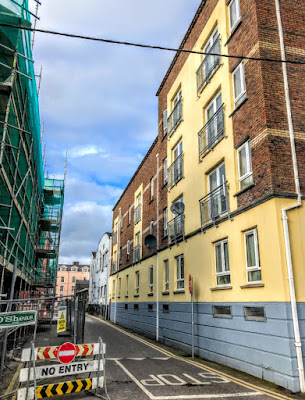 The site of the Sephardic cemetery in Cork was discovered in Kemp Street, on the south-east corner of White Street, to the rear of the Cork Hebrew Congregation’s synagogue in South Terrace, which closed in 2016 (Photograph: Patrick Comerford, 2020)

During my visit to Cork last week, I went in search of some Jewish history in the city, including the remains or sites of synagogues and a lost Jewish cemetery.

There were some Jews in Ireland during the 12th and 13th centuries, but when all the Jews were expelled from England in 1290, the Jews of Ireland too were forced to leave.

Jews do not seem to have returned to Ireland until late in the 15th century, as refugees from the Inquisition in Spain and Portugal seeking a safe haven. Following their expulsion from Portugal in 1497, some Sephardic Jews settled on the south coast. One of them, William Annyas, was elected mayor of Youghal, Co Cork, in 1555, and Francis Annyas (Ãnes) was a three-time Mayor of Youghal in 1569, 1576 and 1581.

However, for the next few centuries, there was only a handful of Jews in Ireland, most of them migrants who had fled persecution in other parts on continental Europe. For the most part, these early Jews lived in and around Dublin.

Samuel de Caceres or Docasirers of Broad Court, London, was one of the first Jewish sworn brokers of the Royal Exchange in London. He was involved in setting up a company to supply food to troops posted in Ireland and towards the end of the 17th century. He sent Benedix or Benedick Markes of Rose Alley in Duke’s Place to Ireland in 1684 to kill some of his cattle.

Markes returned to London through Cork on 13 February 1685, and during his visit may have been used as shochet by Jews living in Dublin. This probably means he was the first Sephardic Jew recorded in Cork City in the 17th century.

This first Jewish community in Cork was comprised of a small group of Sephardim, who arrived in Ireland from Portugal in the early and mid-18th century.

Jacob do Porto was the second signatory on behalf of Bevis Marks Synagogue, London, on the lease of the Jewish cemetery on Fairview Strand in Ballybough, Dublin, in 1718. He seems to have lived in Cork for a time, and to have negotiated to acquire a burial ground for the Jewish community in Cork in 1725 before returning to London in 1729.

It seems there was a congregation in Cork from 1725 to 1796. According to some sources, this early Jewish community was established some time between 1731 and 1747. By 1733, there are reports of Jews living in Cork who were involved in exporting beef to Jews living in London and as far away as the West Indies.

The Jews who lived in Cork in the 18th century included Jacob Lyons, also known as Lyon Jacob or Jacobs, an unlicensed goldsmith or silversmith, who moved to Cork from Dublin with his wife in 1742.

Abraham Solomons, a merchant who was also the shochet in Cork in 1753, was naturalised on 17 March 1769. Samuel Levy, a Jew, was baptised by the Church of Ireland Bishop of Cork in Saint Peter’s Church on 18 August 1754. Michael Salomons, a London shipowner who died in 1769, left a bequest to Philip Levy of Cork, who may have been his agent in Cork.

Marco Levy Pereira, also known as Pereira Levy, was living in Cork with his wife Rosetta Andrade in the second half of the 18th century, and was exporting and importing wine. He was granted permission to trade with three ships between Cork and Cadiz in 1786 and in 1787 he was authorised to import goods from Spain, Portugal, Sardinia and Tuscany.

However, a gradual decline had already set in to the Sephardic community in Cork, and the synagogue and cemetery had closed by 1788, when Pereira Levy’s daughter, Fanney Levy (1765-1829), married Jacob Schweitzer (1759-1829), a German Jew from Braunsheim in Limburg. Without a Jewish place of worship, they were married in the Church of Ireland parish church in Ballingarry, Co Limerick, on All Saints’ Day, 1 November 1788.

The last reference to the family in trade directories in Cork is in 1790, when the business was being conducted by another daughter, Maud Sandro Pereira Levy. Pereira Levy had moved to Italy, and he died on 12 October 1791 in Bari.

The Sephardic community in Cork appears to have died out as a result of inter-marriage, and the Jewish cemetery used by this short-lived community had closed by 1796, when the land was sold. Isaac Solomon, a silversmith, is the only known Jew to have stayed on in Cork by the early 19th century, although members of the Pereira family in London tried to settle the legal title to a house in Lime Street, Cork, in 1850.