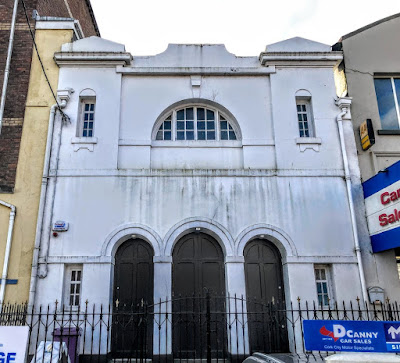 The first Jewish community in Cork, was a relatively small community of Sephardi Jews from Portugal in mid-18th century. These Jews probably did not have a synagogue, although they had their own Jewish burial ground.

But the cemetery had closed by 1788, and this community appears to have died out by the early 19th century after a short while as a result of intermarriage.

Later, an Ashkenazi Jewish community was established in the late 19th century, which founded the Cork Hebrew Congregation in 1881. At first, the community prayed in a small room in Eastville and then rented a room in Marlboro Street in Cork city centre in 1884, before opening a synagogue at South Terrace. 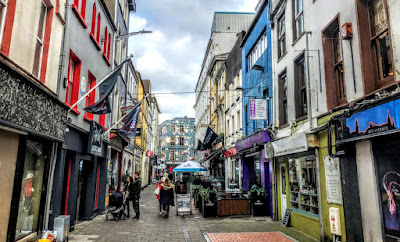 Marlboro Street, Cork … the Ashkenazi Jewish community prayed in a rented a room in Marlboro Street in 1884 before opening a synagogue on South Terrace (Photograph: Patrick Comerford, 2020)

By contrast with the previous Sephardic community, the members of this community, were Ashkenazi, coming from Yakmyan and similar towns near Kovno in what is now Lithuania.

Of course, it is very unlikely that Cork was the intended destination of these Eastern European émigrés. They had fled pogroms in the Tsarist empire, and many of them were also very religious. The explanations offered include stories about an unscrupulous ship’s captain who advised the Jews to disembark and row to America to save money. Another says the Yiddish-speaking Jews confused Cork for New York.

They disembarked at Queenstown, now Cobh, and from there they made their way into Cork City, where they settled in an area known as Hibernian Buildings, in the City Centre, soon to local people as ‘Jewtown.’

This initial group of Jews worked mostly as peddlers, selling door-to-door. These peddlers were known to each other as the vicklemen – vickle means ‘weekly’ in Yiddish, and their door-to-door rounds took a week each. They would travel around Cork City and its hinterland knocking on doors and selling various to the local communities.

These first arrivals were soon joined by family members when they heard that Cork was a tolerant city and the people were friendly.

The congregation was formed in 1881, with Isaac Epstein, formerly of Dublin, as the first president, and Meyer Elyan or Ilion (1844-1928) from Lithuania as the first shochet, reader and mohel, and was known as Cork Hebrew Congregation. At first, the community prayed in a small room in Eastville and then rented a room in Marlboro Street in Cork city centre in 1884, before renting premises at South Terrace.

The Revd Joseph E Myers, from Ramsgate in Kent, who had already served congregations in New Zealand, Australia and England, was appointed minister in 1890. A divided community put is divisions aside and a new united synagogue was set up in South Terrace in 1895, when the Chief Rabbi, Dr Nathan Adler, visited Cork. 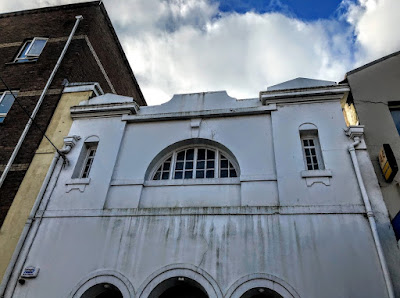 The synagogue on South Terrace was designed by the Cork-born architect Arthur Hill (Photograph: Patrick Comerford, 2020)

The synagogue at 9 and 10 South Terrace faced the threat of closure in 1903 when the Provincial Bank called in the mortgage. But Lord Swaythling, better known as the Jewish philanthropist Samuel Montagu (1832-1911), stepped in and cleared the debt personally.

A new synagogue was built on South Terrace in 1913-1915. The foundation stone was laid on 2 February 1913 by Mr DJ Cohen, vice-president and treasurer of the Hebrew Congregation, Dublin, and it was reported that the ‘new synagogue when finished will be the third in Ireland.’ The contractor was William L Kelleher of Drinan Street, Cork.

The synagogue was a small, two-storey building with a flat front marked by a triple-arched, ground-floor doorway and narrow upper windows flanking a half-moon central window over the entrance.

Arthur Hill was the son of the architect Henry Hill and a member of a well-known Cork architectural dynasty. He studied at the Cork School and Queen’s College, Cork, before going to London, where he worked in the office of Thomas Henry Wyatt and attended the Royal Academy Schools, the West London School of Art, the Architectural Association and University College.

Back in Cork he joined his father’s practice on George Street by 1869, and he continued to practise from the same address for 47 years. When Queen’s College Cork established an Architectural Section in 1891, he was appointed a lecturer.

Hill had a deep interest in Celtic Romanesque architecture. He completed award-winning drawings of Ardfert Cathedral and published a monograph on Cormac’s Chapel, Cashel.

Two years after the synagogue on South Terrace opened, Arthur Hill retired in 1917. He died on 24 February 1921 at Redgarth, Douglas Road, the house he had designed for himself ca 1903.

Some years earlier, Cork Jewish Cemetery, Beit Olam, opened at Blarney Street, Curraghkippane, on the outskirts of the city in 1887. Those buried there include some Jewish victims of the RMS Lusitania that was sunk in 1915 by a German U-boat off the coast of Kinsale and Cobh on its journey from Liverpool to New York.

The new Jewish community in Cork reached its peak by 1939, with about 450 to 500 members. This was an active community, with two football clubs, a table tennis clubs, a debating club, a branch of the Bnei Akiva, an officiating cantor, a shochet or ritual butcher, a doctor and a chevre kedushsa or burial society. For a time, there was also a Talmud Torah next door to the synagogue at 9 South Terrace.

The sons and the grandsons of the peddlers and vicklemen had qualified as professionals in University College Cork and wanted to leave for a place with greater Jewish life and professional opportunities.

But numbers began to decline as the 20th century moved on, and by the beginning of this century only two Jewish families were left in Cork. Services were only conducted every fourth Friday night, and during the High Holidays. Even during the High Holidays, visitors in the form of Chabad-Lubavitch trainee rabbis, had to be brought in from England to make a minyan or religious quorum.

With declining community numbers and unsustainable finances, the synagogue on South Terrace was deconsecrated and finally closed its doors on 7 February 2016.

The Evening Echo reported at the time that only three Jewish men were living in Cork, and that a rabbi and 14 men had travelled to Cork from Dublin for the final service.

‘We are down in numbers. We couldn’t support a rabbi, a Hebrew school, a synagogue,’ Fred Rosehill, chair of the trustees of the Cork Hebrew Congregation, told the Evening Echo. ‘We tried everything. It has come to the stage that there is no money left. If someone gave us money in the morning it wouldn’t matter – we don’t have the members to sustain it.’

The Church of Ireland Bishop of Cork, Dr Paul Colton, said he learned of the closure of the synagogue ‘with immense sadness and a heavy heart.’

He said the circumstances that led to its closure were ‘sad, not least because the closure represents a diminution of the religious pluralism in Cork at a very time when, in Ireland as a whole, greater religious diversity than ever before is a mark of our nation.’

The Cork Public Museum at Fitzgerald Park added a permanent exhibit on Jewish history in 2017. The exhibit, ‘The Tsar, the Rosehills and the Music Shop,’ includes photographs of the Hebrew congregation, items from the former synagogue and stories of Cork’s Jewish residents. The pictures, artefacts, and stories were assembled in the museum by West Cork Heritage Works, which specialises in helping communities tell others about their history and heritage.

The exhibition was opened in May 2017 by the Cork-born award-winning filmmaker, Louis Marcus.

The Star of David on the façade has been removed and the building has been converted into a Seventh Day Adventist church. But a light from the former synagogue in Cork now hangs in front of the Ark in Terenure Synagogue on Rathfarnham Road, Dublin, a light that never goes out. 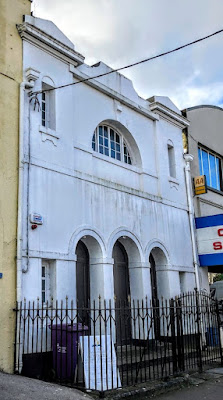 The synagogue on South Terrace has been turned into a Seventh Day Adventist church (Photograph: Patrick Comerford, 2020)