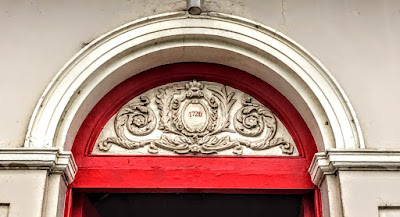 The crowned date ‘1720’ indicates the original use of the Sirius Arts Centre in Cobh (Photograph: Patrick Comerford, 2020)

During my visit to Cobh earlier this month, I was staying at WatersEdge Hotel, next door to the Sirius Arts Centre, housed in a beautiful Italianate building designed in 1854 by the English architect Anthony Salvin (1799-1881) to house the Royal Cork Yacht Club, the oldest yacht club in the world.

Salvin was best known for his restoration work on Windsor Castle and the Tower of London, but the former yacht club in Cobh is the only example of his work in Ireland.

The Sirius Arts Centre, the only organisation of its kind in east Cork, serves as an ‘intermediary between art and the public that endeavours to raise public awareness of art.’ It offers developing opportunities for both emerging and more established artists from both Ireland and abroad.

A crowned date ‘1720’ above the main door is a hint that that this is a heritage building of architectural and historical importance in Cobh, once home to the Royal Cork Yacht Club, which is now located at Crosshaven, Co Cork.

The Royal Cork Yacht Club claims it is the world’s oldest yacht club, although some consider the Neva Yacht Club to be older by two years.

The Royal Cork Yacht Club traces its story back to the Water Club of the Harbour of Cork, established in 1720 by William O’Brien, 4th Earl of Inchiquin, a great-grandson of the 1st Earl of Inchiquin, who was a courtier of King Charles II.

Sailing for private pleasure surfaced first in the Netherlands in the early 1600s. After his restoration and return from exile, King Charles II was presented with the Mary by the Dutch, and developed an interest in sailing on the Thames. His courtiers, including the Earl of Inchiquin, followed his example.

When Inchiquin returned to Cork, private sailing started to become popular through his encouragement. Over half a century later, his great-grandson, 26-year-old William O’Brien, 4th Earl of Inchiquin, and five of his friends formalised their activities and established the Water Club of the Harbour of Cork in 1720.

At first, the club based in a castle on Hawlbowline Island, then held by Lord Inchiquin. It became inactive in 1765, but was re-established in 1802. However, in the wake of the American Revolution and then the French Revolution, the Admiralty identified Hawlbowline for its needs in Cork Harbour. Until then, Kinsale had been the main naval centre on the south coast, but its harbour had begun to silt badly causing problems for warships, which were becoming bigger with deeper draughts.

By 1806, the club had moved to the nearby town of Cove, later named Queenstown and now Cobh, and had started calling itself the Cork Harbour Water Club. 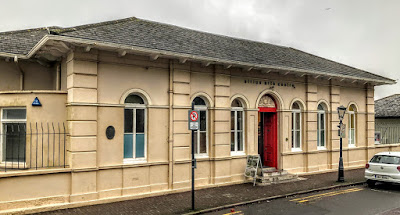 The former clubhouse of the Royal Cork Yacht Club … designed by Anthony Slavin and completed in 1854 (Photograph: Patrick Comerford, 2020)

The club used various premises in Cove as clubhouses until 1854, when it moved into a new building built on land given by Admiral John Hugh Smith Barry of Fota House.

The architect of the new clubhouse, Anthony Salvin, was born in Sunderland Bridge, near Durham, the only child of General Anthony Salvin and his second wife Elizabeth (Eliza) Mills. He was educated at Durham School and in 1820 became a pupil of John Paterson of Edinburgh, who was then working on the restoration of Brancepeth Castle.

Salvin moved to London in 1821, and entered the office of John Nash. His commissions for major houses included Keele Hall in Staffordshire for Ralph Sneyd, and Thoresby Hall in Nottinghamshire for the Earl Manvers. He refaced Norwich Castle, repaired the ruins of Newark Castle and the ruins of Carisbrooke Castle on the Isle of Wight, and restored Alnwick Castle in Northumberland.

He restored the Salt, Wakefield and White Towers at the Tower of London and the Chapel of Saint Peter ad Vincula, and was commissioned by Prince Albert to carry out work on Windsor Castle, where This included replacing sash windows with lancets and mullioned windows and rebuilt the Clewer Tower.

Salvin also worked on the cathedrals in Norwich, Durham and Wells, the Church of the Holy Sepulchre, Cambridge, and the restoration of Trinity College Cambridge, and was made an honorary member of the Cambridge Camden Society.

Salvin’s supervising architect in Cobh was Henry Hill (1807-1887), a member of an influential Cork architectural dynasty.

Salvin’s clubhouse in Cobh stands directly on the waterfront, and it became not only a major yachting centre but also an essential meeting place for Cork society.

The first general meeting in new club house took place on 4 May 1854. Because of the club’s popularity, membership was keenly sought after and club records show many candidates were disappointed when they were not elected to membership.

The members included Prince Ferdinand Maximilian of Austria, later the Emperor of Mexico. He was the founder of the Imperial Austrian Navy and a brother of the Emperor Franz Joseph. A special committee meeting was called on 30 November 1858 to consider whether Prince Ferdinand should be admitted. Many members feared ‘the admission of Foreigners’ into the club might cause the Admiralty to withdraw some of the club’s privileges.

The Prince of Wales, later King Edward VII, attended several RCYC regattas, sailing his yacht Britannia. Sir Thomas Lipton, who challenged for the America’s Cup in a series of yachts called Shamrock, was admitted to the club in 1900.

Meanwhile, the Munster Model Yacht Club was founded in 1872 and later received a royal charter, becoming the Royal Munster Yacht Club. It settled in the clubhouse of the Cork Harbour Motor Yacht Club at Crosshaven in the 1930s.

Cork Week, hosted by the Royal Cork Yacht Club, is held every two years, usually in late June or early July. Once Ireland’s largest sailing regatta, it has been superseded in popularity in recent years by the Dun Laoghaire biennial regatta.

The Royal Cork Yacht Club is celebrating its tercentenary this year. But, while it may be 300 years old this year, it can still claim that it is vibrant, progressive and innovative – just as it was in 1720.

As for the Sirius Arts Centre, it takes its name from the SS Sirius, the first steamship to cross the Atlantic, departing from Passage, about 3 km upriver from Cobh, in 1838. It is a worthy name for an arts centre in a town often associated with Famine ships, the Titanic and the Lusitania. 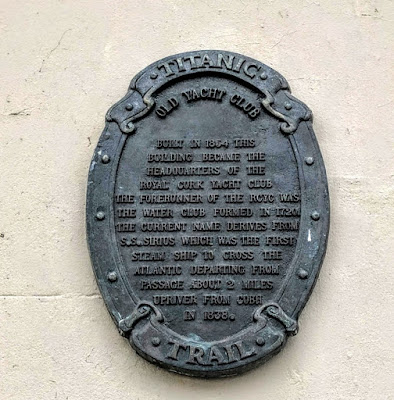 The story of Ireland’s oldest yacht club, told at the Sirius Arts Centre, is part of the Titanic trail in Cobh (Photograph: Patrick Comerford, 2020)

Hi Patrick
I wonder why you have not mentioned in you article The Water Club members combined with The little Monkstown Club in 1828 thus in turn led to the revival in 1828 of the Cork Yacht Club of which no records of Cork Yacht Club can be found after being disbanded in 1765. The Little Monkstown Club to my knowledge was founded on the Island of Haulbowline in 1822.