Finding the site of the
former Great Synagogue
at Duke’s Place, London 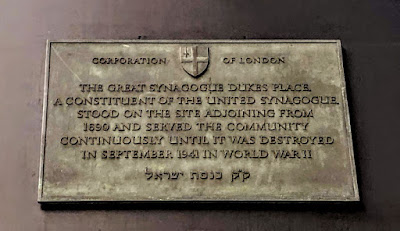 A discreet plaque on a building in Duke’s Place marks the site of Great Synagogue of London from 1690 to 1941 (Photograph: Patrick Comerford, 2020)

The Great Synagogue of London was the centre of Ashkenazi synagogue and Jewish life in London for centuries. It was built north of Aldgate in the late 17th century, but was destroyed during the Blitz in World War II.

After the return of Jews to England in 1656, the earliest Ashkenazi synagogue in London was built at Duke’s Place, north of Aldgate about 1690. This synagogue also acquired a burial ground, at Alderney Road in 1696-1697.

The congregation grew, and by 1714 about 25 per cent of the population in this area of London was Jewish, with over 11 per cent working in the citrus market. A new building was erected in 1722 at a cost of £2,000, the equivalent of £320,000 today. The cost was borne by the businessman and philanthropist Moses Hart (1675-1756), brother of the then rabbi, Aaron Hart.

Myer Lyon (ca 1750-1797) was the hazzan or cantor at the synagogue from 1767. For some time he also doubled as an opera singer at Covent Garden Theatre with the stage name Michael Leoni, which he also used in Dublin.

His rendering of prayers attracted many non-Jewish visitors to the synagogue, including the Methodist minister Thomas Olivers, who adapted Leoni’s rendition of the prayer Yigdal for his hymn, ‘The God of Abram Praise.’ Its melody has the title Leoni in many hymnals, including the Church Hymnal of the Church of Ireland and the New English Hymnal.

Myer Lyon or Michael Leoni may have been born in Germany ca 1750. According to the memoirs of the actor James de Castro, he was born in Frankfurt-on-Main and was invited by ‘the German Jews’ to London, where ‘a very rich Jew, Mr Franks, instantly patronised him.’

The first record of him is in October 1760, when the actor David Garrick (1717-1779) from Lichfield refers to him as ‘ye boy Leoni.’ In his teens, he was appointed meshorrer or choirboy to Isaac Polack, hazzan at the Great Synagogue in London, in 1767 at an annual salary of £40, on the understanding that he was to behave as a Yehudi Kasher or observant Jew.

When his voice came to the attention of the aristocracy and David Garrick, he was given permission by the synagogue elders to appear on stage, where he adopted the name Michael Leoni. He sang a role in Garrick’s The Enchanter at Drury Lane Theatre, and was ‘received with great applause.’

Leoni’s reputation encouraged a number of Christians to come to the Great Synagogue on Friday nights to hear him. Thomas Olivers was so impressed by Leoni’s moving rendition of the Yigdal in 1770 that he was inspired to write words for his hymn ‘The God of Abraham Praise.’

Because of financial problems, the synagogue decided to cut Leoni’s stipend by £8 a year in 1772. But he continued to sing in both the synagogue and in the theatre for some years. 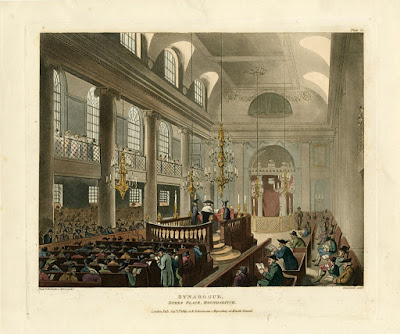 The interior of Duke’s Lane Synagogue: A drawing and engraving by Augustus Pugin and Thomas Rowlandson, aquatint by Thomas Sunderland, in ‘The Microcosm of London,’ Vol 3, by Rudolph Ackermann, 1809

Meanwhile, a third synagogue on the site at Duke’s Place was built in 1788-1790. Unusually for the time, the principal donor was a woman, Judith Hart Levy, a daughter of Moses Hart, who subscribed £4,000, the equivalent of £510,000 today. The architect was James Spiller. The building was in the classical style identified with John Adam.

This vast, cathedral-like synagogue was situated in a gated courtyard, and had large, plain glass windows on three levels. It was drawn and engraved by in 1809 by Augustus Pugin, father of the great architect of the Gothic revival, AWN Pugin.

Membership of the Great Synagogue at that time included members of the Rothschild family. In 1809, the year Pugin visited, three sons of George III, the Dukes of Cambridge, Cumberland, and Sussex, visited the Great Synagogue of London as guests of the Goldsmid family. There they were seated on elegant Egyptian revival chairs as they watched the service.

The synagogue was also visited around this period, during his schooldays, by the writer Leigh Hunt (1784-1859), who wrote, ‘I took pleasure in witnessing the semi-Catholic pomp of their service and in hearing their fine singing, not without something of a constant astonishment at their wearing their hats.’

From his arrival in England in 1827 until his death in 1880, the Anglo-Jewish composer of synagogue music Julius Mombach was associated with the Great Synagogue. He arrived in 1827 as meshorrer (choirboy), and eventually became the synagogue’s choir master, positions that placed him in succession to Myer Lyon.

The Great Synagogue was redecorated and repaired in 1832 and 1852 by John Walen, and restored again with small renovations in 1899 and 1930.

This was one of the original five synagogues that formed the United Synagogue in 1870, and it remained a constituent member.

At one time, there could be up to five bar mitzvahs on the same Sabbath morning and on Sundays there were queues of brides awaiting their weddings at the synagogue, which was set back on the western side of Dukes Place.

However, the Great Synagogue was badly damaged during the Blitz in World War II in a German Air raid in September 1941. A temporary structure was erected on site in 1943 and continued to be used for more than a decade until 26 October 1958.

Despite plans to rebuild the synagogue, and from 1958 the much-reduced community rented rooms at the Hambro Synagogue on Adler Street in Whitechapel, the second Ashkenazi synagogue built after the resettlement. However, this smaller formally synagogue closed on 10 April 1977. 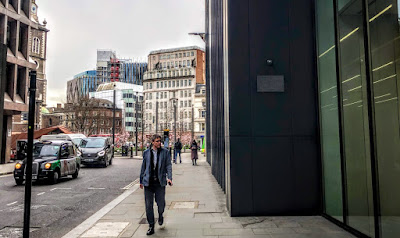